The Miranda Project: A Review

This review is part of my judging effort for SPSFC2. For a little intro to the whole thing and an explanation of my judging style, see this practice review.

Next up for Team Space Leftovers was The Miranda Project, The Miranda Project Trilogy, Part 1, by Matthew Cesca. First, a quick bit of SPSFC-related housekeeping though. The ebook I received for judging purposes had some formatting issues – probably to do with the page numbering in the manuscript from which the .mobi or .epub was made. Just a heads up, I am not sure if it is in the commercially available version. From the “Look inside” I lazily did over on Amazon, it looks like it’s clean. Either way it didn’t bother me much, it was just a little weird. Let’s chalk it up to a delivery issue on the copy. 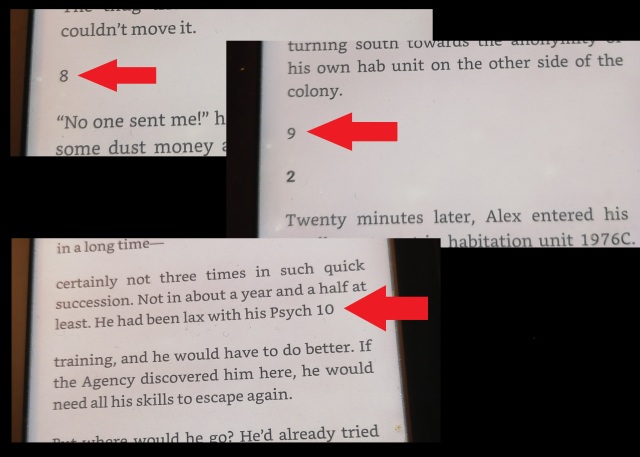 Now on with the show.

The book opens with a content warning for sex, violence and psychological trauma, and  a dedication to Cesca’s kid who is now old enough to read his dad’s books. This whole thing utterly charmed me, and not just because my name is Andrew. I relate on many levels – and of course the content warning (its far more noble primary function notwithstanding) left me interested to find out what sort of dark entertainment was in store.

Still! None of this affected my judgement in the slightest, and it didn’t stop me from rolling my eyes as we were introduced to our protagonist, Trevor “Alex” Alexander, a tough loner on the run, with powers with which he has been crafted into a trained weapon. Here we go, I thought. It’s the cool action hero. Oh well. So much for that. Better luck next-

Ah but you see, it’s what you do with it. And this one was well worth sticking around for. I mean, if you’re not a big fan of the action-man trope, rest assured it gets better. And if you are a fan of the action-man trope (and heck, plenty of people are!), then you’re in for a treat. As far as action men go, Alex is a pretty damn great one – and with plenty of actual depth and sympathetic vibes for those of us with a little bit of fucking culture, there I said it.

To set the scene, the “Agency” (think “the Psi Corps“) gathers up people who manifest psychic abilities. These started occurring in humanity a generation or two previously, and nobody seems to know why. It didn’t take long for the KGB-descended shady world government (centred in Moscow, intriguingly) to realise they were going to make useful tools, though – and be devastating threats to their power if left free. And so the Psychs – dominantly telepaths and telekinetics, but there are also other, rarer manifestations of different powers – are taken in and turned into nice obedient government attack dogs. Alex escaped, through a plot point I won’t spoil, and has been on the run ever since.

Alex is on Mars, hiding out since the Agency doesn’t have much presence there – humanity is widespread across the solar system, giving us an excellent backdrop for this ostensibly simple action scenario. There’s a lot going on, from the Martian terraforming project to the overall simmering political situation, and we get just enough glimpses into it all to lend context to Alex’s struggle and make the whole story that much richer.

I was thrown momentarily by the fascinating iron-heavy infrastructure in the old Mars settlement, and whether it was rusting due to oxygenation, as it says in the book, or oxidation. But it didn’t stall me for long and we were back in business.

The truth behind Alex’s past, and the lengths to which his old family will go to bring him back into the fold, gradually emerges as he continues his struggle for freedom against the sinister Agency. It all leads Alex and his unlikely ally Hannah Diaz to Miranda, a moon of Uranus, where the Agency has an important base of operations.

I really enjoyed the informative and detail-filled tour of the solar system that this story took us on in the course of Alex and Hannah’s adventure. Indeed, after a while I found I was enjoying the journey – and the developing relationship between the two protagonists – so much that I stopped taking notes for the review. It’s a rare thing in my experience, to have a thrust-together couple become close in a believable and compelling way, but Cesca managed it. Were some of the character arc support struts (“pretend to be a married couple to evade detection”, “curse your sudden but inevitable betrayal”, “turns out the love interest is [SPOILER]”) a bit contrived? Sure! It’s a story, y’all. And a good one.

There were entertaining parallels with The Lore of Prometheus, mainly in the superpowers on display and the character dynamic, and of course there was a certain amount of X-Men, in particular I felt a homage to Logan helping save the young Xavier kiddies from the clutches of Stryker. And, as I hinted at, there’s a solid tip of the hat to Babylon 5 in the treatment of people with psionic abilities. And as usually happens with  my comparisons and references, I’m making the story sound unoriginal but nothing could be further from the truth. There were familiar beats here, but the story was in no way derivative. And the ending was solid – a satisfying conclusion for a stand-alone, or a great opening piece for a trilogy.

There is a sweet romance through the story, with a well-earned and well-written pay-off. This results in one (1) sex, and it’s a sex-with-a-disclaimer of sorts, but all in all we’re getting readings in the low digglers for this book. Barely half a nanosiffredi.

It’s pretty good. Some spree, as one would rightfully expect. Some government brainwashing and allied scenes. Nothing you won’t have been fully prepared for by reading the content warning. Two quivering flesh-gobbets out of a possible five.

We don’t get a lot of WTF for our buck, but that’s okay. The origin of the Psychs’ powers remains a mystery, and Alex’s own powers – and their limits – are an unanswered question for later books to take up. The backstory of United Separatist Movement and their attempts to make America (the US? Or all of America?) independent again, is intriguing as well, but there’s not much actual WTF to be had. The Miranda Project gets a human out of a possible Vorlon on the WTF-o-meter.

Apparently this is Cesca’s first sci-fi from a fantasy background, and sure – you could say it’s a little bit paint-by-numbers in some parts. But there’s absolutely nothing wrong with that, because these are solid storytelling ingredients and he nailed it. This was great. The noir pulp opening had me briefly concerned but I see what the aim was there, in revealing the true nature of the man. At every step, respect and goodness shone through in the characters and the storytelling. Five stars.

I’m not often driven to introspection or reflection, but the question does come up sometimes. The big question. So big, there’s just no containing it within the puny boundaries of a single set of punctuationary bookends. Who are these mysterious and unsung heroes of obscurity and shadow? What is their origin story? Do they have a prequel trilogy? What are their secret identities? What are their public identities, for that matter? What are their powers? Their abilities? Their haunted pasts and troubled futures? Their modus operandi? Where do they live anyway, and when? What do they do for a living? Do they really have these fantastical adventures, or is it a dazzlingly intellectual and overwrought metaphor? Or is it perhaps a smug and post-modern sort of metaphor? Is it a plain stupid metaphor, hedged around with thick wads of plausible deniability, a soap bubble of illusory plot dependent upon readers who don’t dare question it for fear of looking foolish? A flight of fancy, having dozed off in front of the television during an episode of something suitably spaceship-oriented? Do they have a quest, a handler, a mission statement, a department-level development objective in five stages? I am Hatboy. https://hatboy.blog/2013/12/17/metalude-who-are-creepy-and-hatboy/
View all posts by Hatboy →
This entry was posted in #SPSFC, Edpool and tagged #SPSFC, book reviews, sci-fi, SPSFC2, telepaths. Bookmark the permalink.