We just watched this movie last night, and I have some thoughts.

My lad Joonatan really said it all in his review on Toisto. I find nothing much to disagree with there, although as always I had a good time watching the fun Avatar BSTs and critters. This story of environmentalism, colonialism and sexy, sexy blue aliens has finally received a new instalment and it was exactly what I expected.

After giving the Sky People a good kicking and sending them off back to Earth with their unobtaniums (unobtania?) between their legs, our heroes … wait, I’m going to have to do a bulleted list:

…and then a bunch of others, mostly Na’vi but okay also:

You can tell the permatars and the nermatars and the normatars apart from the Na’vi because they have five fingers. Except when they don’t. Neteyam, the eldest son and Sully Junior soldier-boy surrogate for black sheep Lo’ak to have issues about, has four fingers. 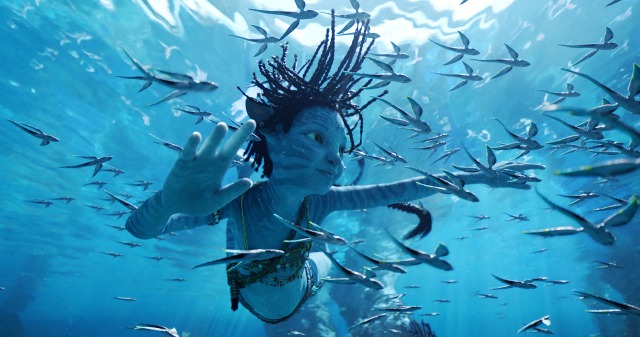 So does this little pain in everyone’s arse.

Anyway, our heroes all those people got along fine for like thirteen years, then the humans came back. And just like in Independence Day: Resurgence (a movie to which Avatar: The Way of Water owes everything), there were more of them and they had bigger ships and more toys. Also Colonel Miles Quaritch was back, in clone permatar (or clermatar) form, along with a bunch of other evil marine clermatars.

What follows is a timeless story of permatar versus clermatar, with a generous dollop of nermatars in peril and occasional help from the normatars, set against the backdrop of a whole other species of Na’vi we didn’t know about before, also whales with immortality serum lubricating their Nobel Prize Winner brains, and perhaps a little bit more some-of-them-definitely-below-the-legal-age-of-consent supple, slender, blue- and blue-green girl- and boy-buttocks in loincloths than we strictly needed. None of which we should not have seen coming a mile (or thirteen years) away.

No, I know the whole clermatar mechanic is kind of new, and if they’d had it in the first movie they could have just resurrected Sully’s brother as a clermatar and none of this would have happened. I assume they invented the consciousness-backup tech right at the end of the last movie, and figured out how to upload it into a clermatar on the way back to Earth. I’m also uncertain whether they went back to Earth, regrouped and returned, or if they just flew around the block a few times and then came back, and the rest of the humans had already been on their way. Doesn’t matter I guess.

So the humans come back, they waste a whole subcontinent with their landing jets, then a year passes. During this time, I assume, the clermatars something something, the humans begin building a city and / or terraforming facility, and the Whalers On The Moon start their whole thing.

Pictured: Leela (James Cameron) pitching the plot of this movie to Fry (someone with knowledge of the original movie but no fungineering degree (billions of dollars and the slightest authority to prevent the inevitable)).

Faced with the inevitability of destruction, Sully takes his family two towns over where they’ll be safe forever. They make friends with the … let’s just call them Mao’ri and stop fucking kidding ourselves … and then the humans and clermatars hunt them down and the slaughter is as indiscriminate as it is predictable. 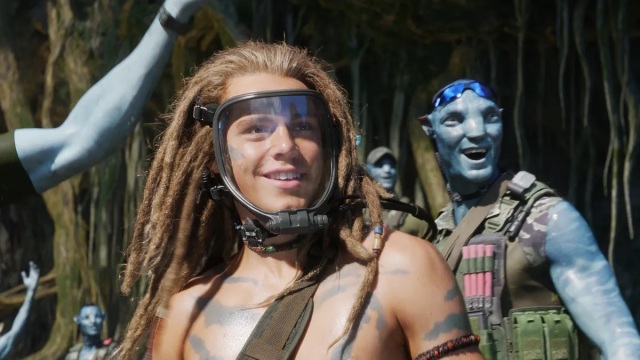 “I sure hope I, a white kid with dreadlocks on a planet where the invaders can’t breathe the air but are working to change that and the humans and aliens are markedly different heights, get put inside a spinning light-flashing whirligig mind-reading machine sometime because that would really make the similarities to Battlefield Earth pop.”

So. Humans destroy everything and are cruel and awful. There’s a cool CGI fight or three. The nature-documentary look and feel is perfect and everything on Pandora is unutterably gorgeous. But what does it all mean?

Well, we have pivoted from “unobtanium is oil and Pandora is a third-world country” to “whale goo is the elixir of life and Pandora is … okay, still a third-world country but also fuck the ocean too.” We’ve gone from “colonisers raping and pillaging the land and taking resources home” to “still that, but also home is fucked and the rich are gonna live on Mars, Pandora is Mars.” Which is actually a pretty subversive message as we gleefully rip up the planet we live on, with no actual alternative in reach.

Ultimately, the idea of relocating to Pandora is as dumb as moving to Mars. Humans can’t live there. The extent to which sealed habitats or total biome replacement would be needed for it to be possible makes “just do the same thing on Earth and save yourself the trip and also remember babies can’t cryo” into a valid counterpoint. Seems like any technology that would allow humans to live on Pandora would be just as applicable to allowing them to live on Earth, with the added benefit that they’re already on Earth.

Next movie, I wouldn’t be surprised if the humans all clermatar themselves on the way over and that’s what the colonisation will be about. I mean that makes way more sense than whale serum and air masks and sealed cities and terraforming. Doesn’t it?

Actually check that, I will be surprised if the story takes any sort of logical turn at this point. Also there will be Fire and / or Air Na’vi. Wait, are the forest Na’vi Earth or Air? They have birds. I don’t know. But if there isn’t a hitherto-unknown third species of Na’vi … fuck, maybe that’s what the clermatarded Sky People will be – the Fire Na’vi. There can’t be more than one more movie, right? They’re not really doing five?

I just hope the Water Kiwis print out enough pamphlets to get the revolution going in between movies because otherwise they’re all in trouble.

Anyway I had a ball watching this movie and then ranting about it with friends and here on the blog (with the same friends, and other friends). I give it a ten-foot-tall Smurfette cat-girl out of a possible sequel to Dances With Wolves where Sgt. Bauer comes back as a clone and they all go to the beach for three fucking hours. It was great. I mean it was searing hot trash, but damn it, it had a sweet butt.

I’m not sorry. It’s a metaphor. The age-of-consent butts, not the other ones. This isn’t getting any better is it. Publish blog. 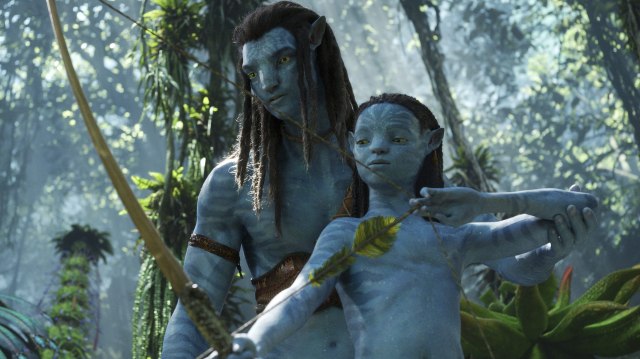 Some random notes from my WhatsApp rants on this movie:

Did they do some whaling off screen in the first movie while inventing cloning? Or is there a sort of land bridge of human ships from Earth to Pandora and they just communicated about this shit?

At the very least, the immortality serum could have played into the resurrection of the dead villains. Instead of cloning maybe?

Okay, I have to relent on the fingers thing because it looks like they did have five fingers on the human hybrid avatars in the first movie. It was just that nobody cared. So I’ll credit them there.

Who was Spider’s mother? I mean, someone Quaritch was banging off-screen in the first movie. Obviously.

Seems like a simple “this is bigger than we can handle now, we need to unify all the subspecies” could have solved the entire running-away plot? Like, make it about how without Sully being a firebrand, the humans would have no trouble because they could destroy each tribe separately while the others naïvely don’t interfere?

It made me want to watch Dune (or at least just Du) again, But they had an Alia Atreides in this one so it’d be a bit rich of them to copy it more. Kiri, if not literally midichlorian’d by the failed communion and permatarding that Grace’s avatar got from the Billion Dicks Tree in the first movie, is probably the daughter of some Na’vi dude Grace got freaky with when she went native. But the timing would suggest it was the BDT.

I’m not often driven to introspection or reflection, but the question does come up sometimes. The big question. So big, there’s just no containing it within the puny boundaries of a single set of punctuationary bookends. Who are these mysterious and unsung heroes of obscurity and shadow? What is their origin story? Do they have a prequel trilogy? What are their secret identities? What are their public identities, for that matter? What are their powers? Their abilities? Their haunted pasts and troubled futures? Their modus operandi? Where do they live anyway, and when? What do they do for a living? Do they really have these fantastical adventures, or is it a dazzlingly intellectual and overwrought metaphor? Or is it perhaps a smug and post-modern sort of metaphor? Is it a plain stupid metaphor, hedged around with thick wads of plausible deniability, a soap bubble of illusory plot dependent upon readers who don’t dare question it for fear of looking foolish? A flight of fancy, having dozed off in front of the television during an episode of something suitably spaceship-oriented? Do they have a quest, a handler, a mission statement, a department-level development objective in five stages? I am Hatboy. https://hatboy.blog/2013/12/17/metalude-who-are-creepy-and-hatboy/
View all posts by Hatboy →
This entry was posted in Hatboy's Movie Extravaganza and tagged Avatar, BSTs, cgi, the way of water. Bookmark the permalink.

9 Responses to Avatar 2: Avatarder (a review)