This review is part of my judging effort for SPSFC2. For a little intro to the whole thing and an explanation of my judging style, see this practice review. 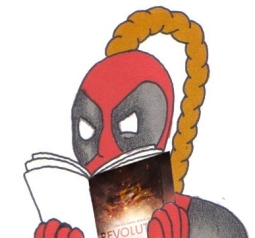 Today I’m bringing you a review of Revolution, The Sol Saga Book 1, by James Fox. As the biggest book in Team Space Leftovers’ allocation for round one of this contest at about 160,000 words, I figured I might as well fill up right at the start.

Revolution is nothing less than an epic future history of the next leg of humanity’s journey, if we ever happen to move off his rock and get the fuck on with it. Debates on the settlement-viability of Mars aside, the Sol Saga series would seem to be just that – a tale of history repeating itself against greater and greater backdrops.

Set mostly on Earth and Mars, and specifically in a training academy and political arena on each planet respectively, with some detours for space dogfights that will probably turn out to be more of a thing in the next book, Revolution is action-packed and boasts some memorable and … I won’t call them sympathetic characters, but they have their moments. It also suffers a little from inevitable comparison to The Expanse, just without the ancient alien stuff and with a considerable amount of male gaze thrown in. Making male gaze occasionally come from a woman doesn’t make it better, either. It’s just a little unfortunate.

At first glance it seemed as though what we had going on was another of my favourite indie sci-fi tropes, the Well Over Six Foot Tall Protagonist, with the added bonus of him being genetically modified to have 0% body fat and being capable of processing oxygen and canapés into a small diamond once every six months. He couldn’t actually do that but I pretended he could and it got me through the rough times. Anyway, as I was saying, at first glance it seemed a bit like that but then it turned out General Keith Brennan was a lot more complex than that and had far better “saga” potential, as we see by the end of this first book.

So, what happens in this one? Mars, on the brink of independence from sovereign Earth, is embroiled in an interplanetary fuckarow when the President of Earth is assassinated on Martian soil. General Keith Brennan and Mars Governor Helena Chu are left in the middle of a political mess that is veering sharply massacrewards from minute one. Also Colt is involved, along with Colt’s giant fucking arsehole of a mother.

Colt’s mummy issues and the cool gang she wants to be a part of and / or beat is a mildly compelling B plot that left me wondering where and when it was going to join up with the Mars Will Rise Again plot going on over in the A thread. I actually thought Spalding and Brennan were the same guy for a bit, but I do tend to have difficulty with that sort of thing sometimes and you know what? I think they maybe could have been combined into one character, except for the fact that were on different planets for a lot of the story. That’s a very minor difficulty, and easy to fix. The story introduced a few too many characters, without much to distinguish them from one another (kind of like The Expanse!). It took a while to get into the flow of it – but once I did, it was great (kind of like The Expanse!).

Helena’s failure to shoot Bruce in the penis, and then in the face, and then keep shooting, is something I consider a major flaw in the narrative, and another one that would have been very easy to fix. I looked at my progress meter and let’s just say you have to be just extraordinarily patient until the 88% mark, and even then it’s a qualified pay-off. And when I say “qualified”, I mean “where’s my fucking spree, Fox? I’m not seeing a spree, and before you say anything no that doesn’t count as a spree.”

Helena and Gwen do, however, have a brief Bechdel-Test-passing conversation with a Frozen reference in it, and I was looking for a better place to congratulate the author for that, but I didn’t find one, so here it is. Pause for kudos.

The book had some minor but distracting editorial issues as well, but that’s fairly standard and was not at all a deal-breaker as far as I’m concerned. Fox used compunction instead of compulsion at one point, and I’m also pretty sure he wrote piss at you like a feral cat instead of hiss at you like a feral cat but frankly I would call that an improvement on the idiom. The stuff about the terraforming and the overall appearance of Mars could have been talked about back when the glassed-over canyons were mentioned, not at the ~40% mark, but I am a known sucker for an info-dump and by no means a target reader here. Fox probably made the right call in scattering the minutiae around a bit.

That’s it, let’s go to the meters.

There’s not much actual sex in this one, just some ogling of taut bodies in crisp dress whites and some mildly distressing changing-room nudity. And … was that “snuggle” as a synonym for “fuck” I just saw? Aw. On the heels of that, whatever is happening here with Spalding and Aldis and Colt and Colt’s mum who is also Colt, all of that needs to stop. Reversal of the roles doesn’t make this any less gross, but I see what Fox was doing. Interesting plot device, and certainly well written. Just – ick. The sex-o-meter gives this a balloon dachshund quarter-filled with congealed porridge out of a possible balloon Eiffel Tower fully-filled with bubble tea.

There isn’t the spree I found myself shaking the book and demanding by about the halfway point, but we get some murder and mayhem, and we get an oof-worthy massacre of innocents. They earn Revolution three flesh-gobbets out of a possible five.

So like I said, this was a hard military sci-fi political thriller with no aliens, only human drama and hard military sci-fi political stuff. Not exactly my bag, but that’s okay. This is a lot of people’s bag. There’s a world here, a universe, and a definite sense of something epic (nay, sagaesque) unfolding, but no WTF. I’m barely registering a completely normal mirror with zero pickles or Hitlers reflected in it out of a possible Scary Door here. And the WTF-o-meter might just be picking up residual WTF from my lunch.

Revolution ended on a cliffhanger and that’s okay. I’ll give this action-packed space thriller three stars on the Amazon / Goodreads scale, but if Maureen Colt doesn’t get her face spree’d off in the next book I’m coming back.

I’m not often driven to introspection or reflection, but the question does come up sometimes. The big question. So big, there’s just no containing it within the puny boundaries of a single set of punctuationary bookends. Who are these mysterious and unsung heroes of obscurity and shadow? What is their origin story? Do they have a prequel trilogy? What are their secret identities? What are their public identities, for that matter? What are their powers? Their abilities? Their haunted pasts and troubled futures? Their modus operandi? Where do they live anyway, and when? What do they do for a living? Do they really have these fantastical adventures, or is it a dazzlingly intellectual and overwrought metaphor? Or is it perhaps a smug and post-modern sort of metaphor? Is it a plain stupid metaphor, hedged around with thick wads of plausible deniability, a soap bubble of illusory plot dependent upon readers who don’t dare question it for fear of looking foolish? A flight of fancy, having dozed off in front of the television during an episode of something suitably spaceship-oriented? Do they have a quest, a handler, a mission statement, a department-level development objective in five stages? I am Hatboy. https://hatboy.blog/2013/12/17/metalude-who-are-creepy-and-hatboy/
View all posts by Hatboy →
This entry was posted in #SPSFC, Edpool. Bookmark the permalink.