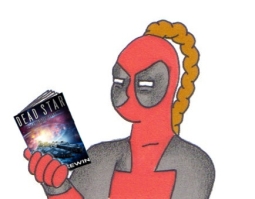 Next up on the SPSFC semi-finals roster for Team Space Lasagna was Dead Star, The Triple Stars Book 1, by Simon Kewin.

From my initial chuckle about the Omnians – do they have pamphlets? They’d better have pamphlets! – I was drawn into this story by the sheer scale of it. This is the sort of thing I like. We’re treated to a great opening with a nice layer of deep-history space gospel and a side order of alien megaengineering, an intriguing and gut-wrenching introduction to our protagonist with a sprinkling of moral dilemma about forcing life on someone who wants to die in the moment … and then it’s off at breakneck speed into a series of adventures across (and in some cases behind) interstellar space.

Selene is the last surviving inhabitant of Maes Far, a planet of bucolic innocents that was destroyed by evil space zealots the Concordance by way of a massive shroud set up between Maes Far and its sun, cruelly strangling all life in the darkness and the cold. 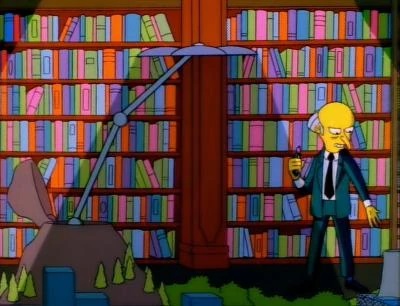 The Concordance, a strange and terrifying cult who went to the centre of the galaxy and found Omn there, are a constant and oppressive presence throughout the story. Their goals are mysterious … but “your soul goes through a wormhole when you die and depending on whether you’re good or evil the wormhole deposits you in Heaven or Hell, and this is all taking a bit too long so we’re just going to go ahead and kill everyone now and let Omn sort them out,” as far as sci-fi religious premises go, is a fucking banger.

Oh, and along with Omn they also found a big stash of doomsday weapons and other tech, to help Phase Two happen faster. Anyway, think “the Ori from the latter seasons of Stargate SG-1, only less goofy” and you won’t be too far off.

Selene barely manages to survive the death of her homeworld, with the help of an old family friend named Ondo who literally rebuilds her – turning her into a cybernetically-augmented whup-ass can-opening machine.

Ondo has many tools at his disposal in his secret hollowed-out asteroid, and he uses a lot of them to info-dump.

Now don’t misunderstand me when I say this – I know a lot of people get the wrong idea when I do. A lot of people also don’t like info-dumps, but they’re wrong. Info-dumps are good actually, and I will die on this hill but here’s the important thing: I will die on a hill made out of info.

I will always have time for an author who finds interesting and plot-appropriate ways to get the reader and the protagonist up to speed about what the stakes are, what the general situation is, and ideally also summarise what’s just happened a little bit so we can move on to the next action scene with confidence. I may be in a minority of readers and viewers who enjoy info-dumps for their own sake and in more or less any format – I’ve rambled about this before – but when it is done right, it should be more respected than it is. I feel it was done right in this story. These dumps were necessary, and every part of them was interesting. They’re good dumps.

The quest to understand and ultimately overthrow the Concordance seems insurmountable, and we only take the first little steps in this book, but there’s still a lot of ground covered. From the beautifully surreal superluminal physics to the massive scope of the galaxy and its zones, from its strange mythology of Omn and Morn to its fabled history of Coronade (the Lost Planet of Gold … okay it’s not that but that’s what I’m calling it for now), there is so much to enjoy. What is the sacred tally and the seventeen sevens? What were Ondo and Selene’s dad up to? What are the entities like the Warden, and who assembled its weird and mega-cool trove and the other dead zone mysteries? What about the Radiant Dragon and the Aether Dragon? What in the name of Omn’s perfectly-formed balls (hah!) is it all about?

Now, is it perfect? Well no, there’s no such thing as a perfect book. Some of the action and other plot elements felt a little slapped-together – although that definitely sounds harsher than I’d like. Let’s try again. There is a certain sense of … “oh yeah, I heard about this, we could go there,” to the story, and while it hangs together with the characters following a trail of clues and relics on their quest to discover the secrets of Coronade and the Concordance, it still made me go “huh” a couple of times. Ondo has a fascinating backstory and setup with his rebel asteroid and gear, but he inherited it from predecessor-rebels and seems unaware of a lot of it until the plot brings it forward. This is almost certainly by design and it can be explained away – Ondo is cautious, and has been alone for a long time, and new facts and gizmos are coming to light – but it is a little difficult to plot out and all. Look, I love to say it, but if anything it felt like Ondo should have info-dumped more at the start. I might have ended up being the only reader who went for it, but that lack of establishing knowledge is kind of what makes the story’s underwear visible in some of the later chapters.

Still, it’s absolutely forgivable and this was a really enjoyable story. Highly recommended! Let’s go to the meters, shall we?

Dead Star includes one (1) sexy time, but it’s not particularly graphic – it’s sweet and nice, and provides a foundational shift in character and pace for Selene. One-half of a perfectly-formed Omnian space ball out of a possible three. Omn has three balls until book canon establishes otherwise, and I haven’t read the next books in the series – yet.

Butchered kids, eradicated planets, and a reconstructive surgery that borders on mad scientist grotesque. Yep, this story has some stakes – not literal stakes with people impaled on them, but fuck it, might as well be. At the same time it’s not overdone, the anguish and death and loss handled well and not lingered over in a weird way. Four-and-a-half flesh gobbets out of a possible five.

The entire big-picture and origin of the Triple Stars galactic civilisation is a solid block of WTF with ‘WTF’ carved into it by a sharpened WTF. I love it. The dead zones, particularly the cool chamber of pedestal-mounted alien wossnames, shows there is a lot here still to tell, a huge background that we’ve barely scratched, and a whole lot going on under the hood, and that’s exactly what I like to see in a story. A seventeen-minute Smeg ‘n’ the Heads Om solo out of a possible crypto-fascist bourgeoise tension sheet for Dead Star on the WTF-o-meter.

With an amazing setting and villains, and protagonists you can’t help but root for (Selene’s traumas, and her trust / suspicion relationship with Ondo, is compelling and believable); some great tense space moments and exciting action sequences; and a grand cliffhanger  ending but also some closure to the book’s narrative that makes this satisfying on its own, Dead Star is another good ‘un. Do pick it up and take a look. I give it four stars on the Amazon / Goodreads scale.

I’m not often driven to introspection or reflection, but the question does come up sometimes. The big question. So big, there’s just no containing it within the puny boundaries of a single set of punctuationary bookends. Who are these mysterious and unsung heroes of obscurity and shadow? What is their origin story? Do they have a prequel trilogy? What are their secret identities? What are their public identities, for that matter? What are their powers? Their abilities? Their haunted pasts and troubled futures? Their modus operandi? Where do they live anyway, and when? What do they do for a living? Do they really have these fantastical adventures, or is it a dazzlingly intellectual and overwrought metaphor? Or is it perhaps a smug and post-modern sort of metaphor? Is it a plain stupid metaphor, hedged around with thick wads of plausible deniability, a soap bubble of illusory plot dependent upon readers who don’t dare question it for fear of looking foolish? A flight of fancy, having dozed off in front of the television during an episode of something suitably spaceship-oriented? Do they have a quest, a handler, a mission statement, a department-level development objective in five stages? I am Hatboy. https://hatboy.blog/2013/12/17/metalude-who-are-creepy-and-hatboy/
View all posts by Hatboy →
This entry was posted in #SPSFC, Edpool and tagged book reviews, om, ommm, ommmmmmm, reading time with edpool, scifi. Bookmark the permalink.