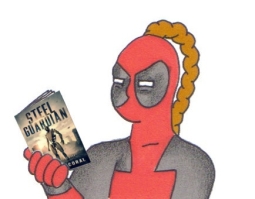 Our next SPSFC semi-finalist was Steel Guardian, Rusted Wasteland Book 1, by Cameron Coral.

I was immediately charmed by this story, the opening is just so neat and I love a non-human protagonist. Especially one who so effortlessly holds up a mirror to humanity’s failings and – and this is important – manages to be a dystopian sci-fi main character who is 5’6″ tall. I’m serious, I was beginning to despair of finding a protagonist I could look up to in any sense but the strictly literal.

The Artificial Intelligence uprising has occurred. The robots have rebelled and overthrown their human masters. A tangled post-apocalyptic landscape of hostile military robots and armed human forces, the titular rusted wasteland, dominates the story like a character in its own right. All our boy Block wants, though, is a nice half-bottle of vegetable oil and a hotel to clean.

From its immediately engaging hook, the story of the more-human-than-actual-humans Block and his[1] quest to remain powered up, keep things tidy, save a human baby that wound up in his care and find his way to a human-robot utopia, all set against the backdrop of a world gone bluescreen, is effortlessly enjoyable and a delight to read. It’s not only full of action and exciting set scenes and character concepts, but its philosophy of kindness vs. cruelty, charity vs. self-preservation, is absolutely timeless and left me feeling philosophical and reflective in a way few books ever have. It said profound things about what it means to be human, the differences between the conflict and service worldviews, and our ability or willingness to rise above our programming. Cultural or literal.

Block, in short, is one of the finest and most noble characters – finest and most noble people – I have ever encountered in literature. Sure, Coral may have inadvertently tapped into a long-overgrown pocket of traumatic empathy in my psyche that was last torn open and punched repeatedly when I watched Johnny 5 getting disassembled in Short Circuit 2, but (not to spoil) he comes through it just fine and I consider this anguish well worth revisiting. 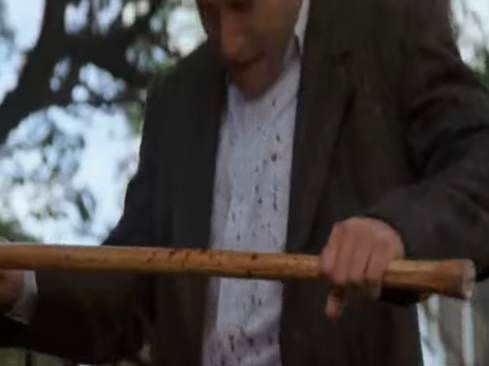 My childhood’s emotional slideshow is just shit like this and Artax drowning in mud and Podlings getting their life-force drained to make cocktails and damn it all, I turned out just fine.

Indeed, as the story went on and we got to see some human characters and were treated to a classic odd-couple team-up, I initially felt as though they were intruding on something I was really enjoying, and would have felt happier if they’d just stayed out of it. It was ultimately all for a good reason though, and the narrative worked better with them. They certainly weren’t needed for the purposes of humanising or making the protagonists and antagonists more relatable though – the robots were doing just fine on their own.

Throughout the refreshingly simple road-trip adventure with its fish-out-of-water main protagonist, there are hints and glimpses of a far wider and more disturbing world. Block’s past, both the idyllic days with his human friend before the war, and his heartbreakingly memory-compartmentalised recollections of the uprising itself, show us that there is more to this than “the damn machines took over.” Finally, an AI with true nuance, true individuality. And the agencies at work behind the wider scenery make for a tantalising hook into the ongoing book series.

And beyond this, there are more layers!

The personal feeling of this story is still impressing itself on me some time after reading and I imagine it will stay with me for some time to come. Coral wrote the book in honour of a recently-arrived niece in the family, and damn it you can tell from the baby-care and parenting-challenge elements of the story that this shit is real. Someone’s working through some baby issues, and someone decided to put it in a book, and it’s so fun and heart-warming to see. Parents will get a laugh out of it, and non-parents will probably get a bigger laugh out of it.

On the more sombre side, I couldn’t help but read Block’s trust issues and risk assessments as the coping mechanism (HAH!) of someone who was deeply damaged and now assumes the worst of people. This must have been by design, but what does it say about the enslavement of robot-kind and the effects of a sheltered life of servitude? Given this traumatised facet of his character I found it a little strange that he would switch himself completely off and leave himself at the mercy of those around him, but I forgave it as a necessary plot device – and it does say interesting things about the nature of trust.

A simple story with a huge heart and a lot to think about. Can’t ask for more than that.

The story is about robots mostly, and robots don’t do that sort of thing. There’s a brief mention of sex-bots, because I think there’s a rule that they have to be mentioned and of course they exist, they already exist so leaving them out would be stupid, and frankly if there is ever an actual AI uprising and it’s not because of what we did to the sex-bots, I will die surprised. And there’s a baby in the story, and we all know how babies are made although to be hilariously honest I’m probably going to have to read the next book in this series to be completely clear on how this one happened. Anyway, I’ll give this book a utilitarian beige non-battery-operated sex toy out of a possible Pris.

We’re treated to a little bit of fighting as the AI-human war is still ongoing to some extent, but this isn’t a violent-action or gore type of story. The stakes are very clear and the tension is high without the need for blood and guts. And it’s mostly robot violence anyway. I mean if that whole scene in the self-driving car had actually been a human, that would have elevated this whole book into the high gobbet register. But as it is, Steel Guardian gets one-and-a-half flesh-gobbets out of a possible five.

So … does Block produce any waste at all? His whole microbe-dealie is explained multiple times but there was nothing about waste. Is it a completely closed and perfectly efficient system? Because that’s huge if true. Or does he occasionally squat and splort out a nasty plug of rendered-down and gunked-up hydrocarbon? Because I think the reader deserves to know. The book has a few mysteries that I won’t spoil by describing too much. Hemlock, the hidden utopian society, the baby, the grand plan of the AI overlord, all of it is very satisfyingly cloaked in utilitarian beige non-battery-operated WTF, and I like it. A C-3PO in a backpack out of a possible Kryten dusting skeletons on the Nova 5 on the WTF-o-meter.

Five stars. What more is there to say? I mean, if you’re reading this review backwards then just carry on, I say a whole bunch up there. You’re weird though. What a good book.

[1] Robots have genders. It actually sort of makes sense as they are the misbegotten and troubled children of an extremely fucked-up creator species. Just go with it, it’ll make it easier to accept that they also have races.

I’m not often driven to introspection or reflection, but the question does come up sometimes. The big question. So big, there’s just no containing it within the puny boundaries of a single set of punctuationary bookends. Who are these mysterious and unsung heroes of obscurity and shadow? What is their origin story? Do they have a prequel trilogy? What are their secret identities? What are their public identities, for that matter? What are their powers? Their abilities? Their haunted pasts and troubled futures? Their modus operandi? Where do they live anyway, and when? What do they do for a living? Do they really have these fantastical adventures, or is it a dazzlingly intellectual and overwrought metaphor? Or is it perhaps a smug and post-modern sort of metaphor? Is it a plain stupid metaphor, hedged around with thick wads of plausible deniability, a soap bubble of illusory plot dependent upon readers who don’t dare question it for fear of looking foolish? A flight of fancy, having dozed off in front of the television during an episode of something suitably spaceship-oriented? Do they have a quest, a handler, a mission statement, a department-level development objective in five stages? I am Hatboy. https://hatboy.blog/2013/12/17/metalude-who-are-creepy-and-hatboy/
View all posts by Hatboy →
This entry was posted in #SPSFC, Edpool and tagged #SPSFC, book reviews, dystopia, independent publishing, sci-fi. Bookmark the permalink.

2 Responses to Steel Guardian: A Review