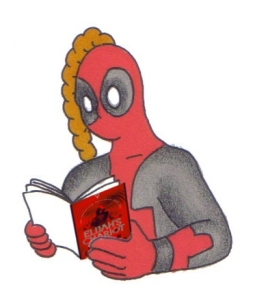 This week I read Elijah’s Chariot, first book of The Forgotten Children series, by Andrew Griffard.

I’ll level with you and get the worst of it out of the way right up-front: I was a little put off by the title here. It just … look, Elijah just isn’t an interesting name. It isn’t. When you see a book with Elijah in the title, it makes you feel like you’re about to get preached at by an Amish dude. And I’m here to read some goddamn sci-fi. I know Elijah Bailey was named Elijah but the thing you need to know about that is, that was the worst thing about Asimov’s Robot books and it still bores me enough to make me not want to read them even though I already read them when I was like ten. The name Elijah is so boring – if you’ll continue to indulge me for just a minute – it makes me want to travel back in time thirty-odd years and beat up a small Australian boy and take away his Asimov books. For his own good.

Okay, phew. That was harsh but we got through it. Elijah’s Chariot is a really pretty fucking good book and I wholeheartedly recommend it. Maybe I should have led with that. Oh well, too late now.

I was drawn in by the little nicely-done interactions between the kids and their families, there was some excellent character-building right off the bat which made this really engaging. Irina was a real piece of work. Viktor seemed like a nice kid and it was super interesting to see a protagonist with cerebral palsy, even if that ultimately wasn’t really the point it was a fascinating intro and a nice bit of setting and atmosphere work. I was concerned that something gross was going to happen with Svyeta, but it was another good piece of buildup. Her big ol’ vodka chugging drunk dad was a classic. All in all, really nice. From there, it was easy to get pulled along by the story, which begins to unfold good and fast and oh boy, what happened? What was that? Why was that?

What am I talking about?

Well, since the blurb in Amazon and other product descriptions already basically spoil this, I guess Griffard will be okay with me going there. This book begins as a nicely subdued, slow-burn low-key-menace story about a meteorite (Jerry, named Ilya in Russia and thence came the titular Elijah – no wait come back, I won’t say that name again, don’t beat up ten-year-old me anymore, I was a very frail child) about to hit Earth. Not an extinction-level meteorite, but a this-is-cool-let’s-study-it-yay-science-level meteorite. Sean and his dad travel to Russia where the rock is projected to hit, and we watch it all unfold from there. Will the meteorite be full of killer alien wossnames? Goop that turns everyone into shambling green slime-monsters? This was my guess.

So, the meteorite strikes, and it slows down before landing so we know it’s not natural, but then suddenly people just start to die. Headaches, then death. Boom. It was mildly amusing to see a book written in 2015 dealing with a “pandemic”, incidentally. Interesting. But again, the pandemic and the deaths weren’t really the point, although as far as I’m concerned they could have been. I was perfectly content seeing a new look at an alien invasion through the clever method of spaceborne kill-rocks, and a global collapse like we see in The Stand.

Of course, like The Stand, this book had to go and get weird. Only the adults die, and the surviving kids suddenly get superpowers. That was unnecessary to the story. It’s always unnecessary to the story! But okay, fine, this is where we’re going with this one. I see. Okay. Viktor’s ailments go away and he becomes some kind of genius. And the main protagonist seems to have “everything powers”. Alright. At this point in the story I made a review note for myself that read simply, “what the absolute fuck is going on.”

It was that kind of story! It turned into a New Mutants reboot and it absolutely didn’t have to, but damn it, it was still interesting and so I read on. And you know what?

It checked out. Griffard, you mad crazy sonofabitch, you actually tied it together and explained what was happening in a way that made sense. Un-fucking-believable. I was not expecting that. I was all ready to roll my eyes and call this a superhero novel that was 85% origin story. Which … okay, in one way it kind of is, but damn it, it works.

The book’s mostly about kids, so. You know. I mean there’s a bit of creepiness at the start and obviously once you end up with all the adults dying and the streets getting taken over by a bunch of Russian gangbangers there’s going to be a bit of hankski pankski, but it was ultimately fairly sanitary. It certainly could have been a lot worse and I was bracing myself. I’ll give it an Amish dude out of a possible Amish dude with an ice-cream smooshed in his face, uh, in a sexy way. What, are they going to read this? It’s on a fucking computer.

Not much gore here, although the body-count may be in the top five body-counts for the #SPSFC so far. A whole fucking ton of people die, but it’s pretty bloodless. One flesh-gobbet out of a possible five.

This story’s WTF curve was like an exponential sequence graph. It started slow and then went vertical, fast. And just when you think there’s no way you’re ever going to understand what’s going on, that’s when Griffard yanks the tablecloth away and not only does everything on the table remain more or less upright and untouched, the tablecloth turns into a flock of pigeons that fly out of a possible now I actually look at this properly, I realise I’m just reading out the feedback I got from the WTF-o-meter. And I’m okay with that.

A really enjoyable read, even if we’re left lacking a little bit of closure on some of the plot threads – that’s why it’s part one of a series. This one gets four stars on the Amazon / Goodreads scale.

I’m not often driven to introspection or reflection, but the question does come up sometimes. The big question. So big, there’s just no containing it within the puny boundaries of a single set of punctuationary bookends. Who are these mysterious and unsung heroes of obscurity and shadow? What is their origin story? Do they have a prequel trilogy? What are their secret identities? What are their public identities, for that matter? What are their powers? Their abilities? Their haunted pasts and troubled futures? Their modus operandi? Where do they live anyway, and when? What do they do for a living? Do they really have these fantastical adventures, or is it a dazzlingly intellectual and overwrought metaphor? Or is it perhaps a smug and post-modern sort of metaphor? Is it a plain stupid metaphor, hedged around with thick wads of plausible deniability, a soap bubble of illusory plot dependent upon readers who don’t dare question it for fear of looking foolish? A flight of fancy, having dozed off in front of the television during an episode of something suitably spaceship-oriented? Do they have a quest, a handler, a mission statement, a department-level development objective in five stages? I am Hatboy. https://hatboy.blog/2013/12/17/metalude-who-are-creepy-and-hatboy/
View all posts by Hatboy →
This entry was posted in #SPSFC, Edpool and tagged #SPSFC, book reviews, reading time with edpool. Bookmark the permalink.

1 Response to Elijah’s Chariot: A Review