The Elcy Protocol: A Review 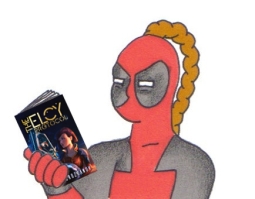 This week for SPSFC I also reviewed The Elcy Protocol, by Bave Grozdanov.

This here book is a real chonker. I was thrown by the fact that I was working with a Kindle e-book, and it seemed to be taking forever to get anywhere. But that was just because the book had so many pages. Which was fine, because they were quality pages and I admire a thick juicy slab of bookmeat even if in this case it was conceptual meat on account of it being electronic. Plus, I was drawn in by the charming premise and fun characters, so I didn’t notice the (semi-illusory) drag until I was hooked. Great opening.

Yes, this story has an excellent premise and a really interesting protagonist, namely the erstwhile Elcy – formerly the rugged, almost literally loose cannon battleship Light Seeker, an old AI monster that retired from the seemingly perpetual war of Grozdanov’s narrative and was downloaded into an artificial biomech human body so she could look after the son of her former Captain. Some decades later, said child is now a grumpy old man and Elcy returns to active service – as a permanently skinny young adult human female this time – by way of cadet boot camp.

See what I mean about the opening and premise?

I was far more interested in seeing Elcy interact with her “fellow” humans than I was in reading about her previous incarnation as a battleship, and as the narrative skipped back and forth a little jarringly between past and present storylines, it got a bit annoying. Especially since the jumps back and forth felt designed to tantalise and frustrate (and look, for all I know they were, and that was well done). The date-stamp on each part was useful but difficult to keep track of in detail, and with the addition of straight-up segments of redacted memory, it became even more fragmented and strange.

However, all of this gradually (over an extended exploration-sequence; like I said, this was a hefty boi of a book) begins to fall into place and the secrets and restricted memories are unwrapped in a really interesting way. The ultimate point of the whole thing was almost an afterthought, though – almost a McGuffin but not even that big a deal – and I wonder if it’s going to be explored in further stories because it didn’t quite make an effective conclusion to this one.

Now, I’m one of those weird readers who don’t really care about that sort of thing, as long as the setting is good. And I’m not saying the plot arcs and endings weren’t there, or weren’t up to snuff. Another reader might be able to pick them out and appreciate them more. They just didn’t resonate with me in such a way as to justify the length of the journey. But the journey, for me, was really the point. I was interested enough in Elcy as a character, and in her interactions with humans, and in the backdrop of this weird Starship Troopers[1] forever-war version of humanity’s future, to such an extent that I didn’t really care about the narrative’s climax being arguably not-quite-explosive.

At one point Elcy reflects on humanity making contact with a third alien species (they already know two), and how the immediate result would be a third war front getting set into place. That was fascinating for what it said about that human civilisation, as well as the fact that – well, yeah, this is a battleship talking. Of course that would be her first move. And yet, Elcy herself doesn’t seem aggressive, despite her admittedly aggressive responses in a lot of situations.

The interstellar empire of humanity, even at the time when Elcy was a battleship, numbered “two quintillion people” and was at war with two separate alien civilisations. I was resigned, by halfway through the book, to never finding out what the Cassandrians or the Scuu actually were. Maybe that was the point. We may have been looking at the entire story through a keyhole, but it seemed like nobody made any effort, ever, to do anything but go to war with these alien races.

I was charmed by Elcy’s personality and behaviour. It read, to my completely inexperienced and non-clinical mind, like an examination of a neurodivergent personality forced to deal with normies. Her relationship with Sev was interesting but never really explored in a way I would have enjoyed seeing, as I was expecting Grozdanov to make some point about what a disastrous (or beneficial) guardian for a human child a battleship would be, and what it had done to Sev developmentally.

Overall the length of the book made it seem to drag when it didn’t (necessarily), but the only really noticeable part I felt was too long was the antagonist’s monologue at the end. Too many moving parts, built up over an admittedly impressive narrative, requiring too much explanation.

Fuck it, let’s go to the meters.

No sex. Elcy is distilled down into the bio-synthetic body of a roughly teenage girl so as to provide a big sister figure to Sev, and then she just stays that way. The Elcy Protocol gets a C-3PO Human Cyborg Relations out of a possible Bender Bending Rodriguez. If you have a thing for barefoot girls in sci-fi, you might coax a C-3PO Human Cyborg Relations with a red forearm for no reason out of the sex-o-meter, but I don’t know why you’d bother abusing a delicate piece of scientific equipment for this.

Not much gore either. There are space battles and a plentiful body-count, but not much in the way of up-close and personal. One flesh-gobbet out of a possible five.

The Elcy Protocol scores well here, on account of the sheer Banksian fun of the AI spaceships and their different levels of interaction, as well as the funky surreal nature of the “third contact”, the cobalt symbols and the fractal what-have-yous. It was all very visually nice to read, and combined with the flashback structure and the concept of memory as military industrial complex property, it made for a decidedly strange story. The WTF-o-meter gives this book a pair of sandals lying on a table out of a possible Memory Restriction Imposed.

The nature of memory and reality, privacy and free will are all called into question in this story. The main plot, of exploration and revelation of an alien intelligence, is truly secondary to whatever was going on with Elcy and her place in society. Bittersweet ending, but for the twists and turns in this story there doesn’t seem any resolution, nothing that really presents itself as a climax or revelation. Three stars!

I’m not often driven to introspection or reflection, but the question does come up sometimes. The big question. So big, there’s just no containing it within the puny boundaries of a single set of punctuationary bookends. Who are these mysterious and unsung heroes of obscurity and shadow? What is their origin story? Do they have a prequel trilogy? What are their secret identities? What are their public identities, for that matter? What are their powers? Their abilities? Their haunted pasts and troubled futures? Their modus operandi? Where do they live anyway, and when? What do they do for a living? Do they really have these fantastical adventures, or is it a dazzlingly intellectual and overwrought metaphor? Or is it perhaps a smug and post-modern sort of metaphor? Is it a plain stupid metaphor, hedged around with thick wads of plausible deniability, a soap bubble of illusory plot dependent upon readers who don’t dare question it for fear of looking foolish? A flight of fancy, having dozed off in front of the television during an episode of something suitably spaceship-oriented? Do they have a quest, a handler, a mission statement, a department-level development objective in five stages? I am Hatboy. https://hatboy.blog/2013/12/17/metalude-who-are-creepy-and-hatboy/
View all posts by Hatboy →
This entry was posted in #SPSFC, Edpool and tagged #SPSFC, reading time with edpool, scifi. Bookmark the permalink.