This week I dived into Shepherds, by J. Drew Brumbaugh. It’s a near-ish-future aquatic sci-fi so that’s the level I’m at with the whole ‘dived in’ thing. I’m not even sorry.

This was a really interesting and suspenseful action drama, let down by one tiny thing that I think would probably be pretty easy to write out of the story or otherwise minimise. The author is just a little bit too keen on describing the female characters. Specifically, their boobies.

Now look, I like boobies. So do a lot of readers. All up and down the gender and sexuality spectrum, boobies are a thing that unite an awful lot of us. Boobies are great.

Anyway, if it was just the hopeless sleazy hapless villain Captain Poddington who was obsessed, that would be one thing, but it was fairly widespread. That being said, it was a really small and fixable thing, and probably also down to personal taste as well, so let’s move on. It certainly didn’t spoil the story for me.

I immediately loved that the male protagonist was a Finnish guy. No idea where it came from (Brumbaugh appears to be from the US), but Toivo was repressed, melancholy, fatalistic and deeply conflicted about his feelings regarding Russians. It’s written with knowledge. Toivo is a great, tragic, triumphant protagonist. And his boat being named Sisu is just perfect. 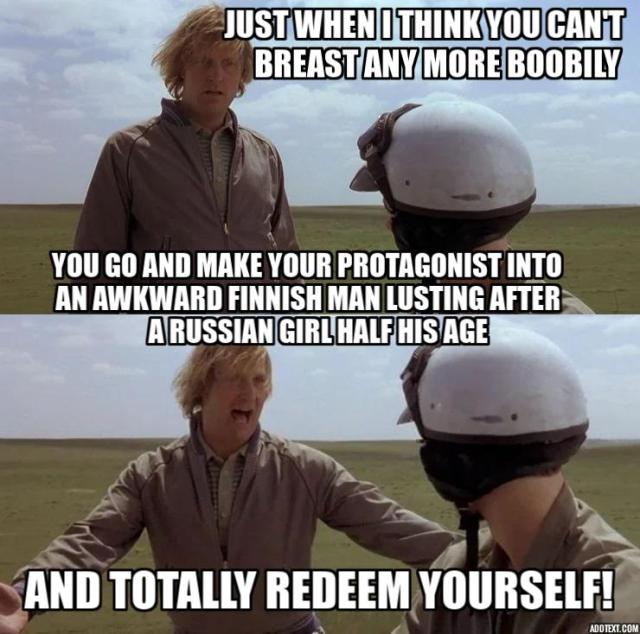 I know I said we were moving on but this meme demanded to be included.

Anyway, what the villains of the story lack in complexity and relatability, they more than make up for in being giant shitbags who keep you turning the page and angry-reading about until they finally get their comeuppance. The world of the late 21st Century is well-realised and (depressingly) all too plausible. The developments, in the ecology and fisheries and sociocultural / bio-science issues … all really nice. Subtle, and not infodumped too extensively, but that gives it an intimate feel. Like the Pacific ocean isn’t all that big, really (when, you know, by the end of the 21st Century if anything it’s probably going to be even bigger than it is now).

The dolphin sub-plot is nice, understated and clever, not overblown and somehow not silly despite the fact that it lands somewhere between Flipper and Seaquest DSV. The revelation of the deep history and mythos of the dolphin species, as well as their ‘religion’, was really interesting. Their use, as scouts and helpers, swung between extremely effective and kinda pointless, but it was far more often the former.

The action kept the pages turning, the ending was darn exciting, and the human drama was refreshingly innocent. People are people, no matter whether they have webbed fingers or are Russian!

I think we can all learn something from that.

A couple of raunchy old sex scenes in this one, and an awful lot of male gaze, for better or worse … but for all that, I think the emotional connections between the characters were more important than the physical ones – and that came through in the story. One Nemo and eight hundred and fifty assorted Wendy Juniors and Marlon Juniors out of a possible mass shoal spawning that turns the ocean to cold chowder with its explosive, instinct-driven passion.

Shepherds boasts some brutal murders, but what hit hardest for me was the hate behind a lot of the killing, the fear of the alien, and of course the senseless butchery-for-profit of the sweet and Douglas-Adamsian dolphins (the main difference being these ones didn’t fuck off when Earth was about to be destroyed). It was a gut punch every time. It just … wasn’t all that gory. Let’s give it two flesh-gobbets out of a possible five.

It all hung together quite nicely, the genetic engineering and the cultural and religious backlash against it, the future of human farming and drug-running and corporate greed and all the rest of it. Not really much in the way of WTF at all, I was just left reading about a world with a history I wanted to learn more of. I’ll award this one 17% of a Kyle MacLachlan out of a possible David Lynch production.

Shepherds was interesting to read and while a lot of its characters could have used a bit more rounding out, I cared about them and was happy with how it all went. I’ll give it a very solid three stars on the Amazon / Goodreads scale, although I would have been inclined to give it three-and-a-half if I could. Good stuff!

I’m not often driven to introspection or reflection, but the question does come up sometimes. The big question. So big, there’s just no containing it within the puny boundaries of a single set of punctuationary bookends. Who are these mysterious and unsung heroes of obscurity and shadow? What is their origin story? Do they have a prequel trilogy? What are their secret identities? What are their public identities, for that matter? What are their powers? Their abilities? Their haunted pasts and troubled futures? Their modus operandi? Where do they live anyway, and when? What do they do for a living? Do they really have these fantastical adventures, or is it a dazzlingly intellectual and overwrought metaphor? Or is it perhaps a smug and post-modern sort of metaphor? Is it a plain stupid metaphor, hedged around with thick wads of plausible deniability, a soap bubble of illusory plot dependent upon readers who don’t dare question it for fear of looking foolish? A flight of fancy, having dozed off in front of the television during an episode of something suitably spaceship-oriented? Do they have a quest, a handler, a mission statement, a department-level development objective in five stages? I am Hatboy. https://hatboy.blog/2013/12/17/metalude-who-are-creepy-and-hatboy/
View all posts by Hatboy →
This entry was posted in #SPSFC, Edpool and tagged #SPSFC, Edpool, suomi mainittu, waterworld. Bookmark the permalink.

3 Responses to Shepherds: A Review