THE Suicide Squad (a review)

I’m going to be running out of time this weekend and probably for the rest of the next couple of months, so let’s get a quick review down for The Suicide Squad before my second dose of corona vaccine kicks in and I go collapse in bed for 12 hours (not feeling anything but a sore arm right now, but can sort of feel a bit of wooziness on the horizon, admittedly this could also just be chicken wings and burgers and bubble tea and lack of sleep).

Long story short, it was good!

Long story slightly less short, it was – like many have said already – a DC version of Guardians of the Galaxy. They didn’t shy away from the really crazy shit, and I also appreciated the fact that they made no effort whatsoever to explain any of it. This guy is a shark? Okay. This guy is a weasel? Sure. Pete Davidson? Alright but not for long, okay? 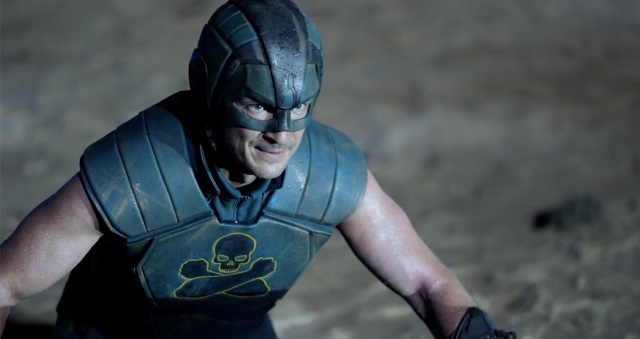 Oh TDK. I’m glad Fillion is such a good sport for Gunn. He’s come a long way since Slither.

To be honest, the only thing that really set it aside from an entertaining bit of fun for the whole family was the explicit gore – and I may be turning into an old fuddy duddy or I may just want to watch this with my daughters, but it really added nothing to the movie – and the occasional “fuck”. From which, as children of Australian heritage, my daughters will not be sheltered. But yeah. My immediate thought on watching this was that they could have off-screened or otherwise changed 90% of the brutal violence in this movie, and lost nothing.

My only style notes would be that they had a humanoid(ish) great white shark in here but it didn’t do a single shark-like attack, so they actually missed an opportunity for more shocking violence. All King Shark’s attacks were either anaconda swallowings, or R-rated Hulk smashes. Oh well. My only other suggestion, if they kept a couple of nasty King Shark attacks, would be that they keep Polka-Dot Man’s power in its current gory glory. The rest was literal overkill.

So anyway, you could tune this down to Deadpool at worst and it wouldn’t be to the movie’s detriment, is my point. The Thinker didn’t, sadly, do anything clever the way I kept waiting for him to. That was disappointing. But otherwise the characters were great. All seven hundred and fifty thousand of them!

Idris Elba and Daniela Melchior as Bloodsport and Ratcatcher 2 were a highlight as the movie’s emotional core, part of what was missing in the original version of this cinematic adaptation. Elba is usually pretty subdued and depends on his acting ability to put across the emotions of his characters. In this movie, he still does this but in a dialled-up and surprisingly animated way, with the same soulfulness. He manages Will Smith quip-levels with none of Smith’s AW HELL NAW. And that’s a good thing, as long as you’re not actually Will Smith. I guess Bloodsport’s daughter sub-sub-subplot was a bit surplus to requirements, but it added a dollop of depth to his character at the cost of very little screen time, so call it a win.

John Cena was a fucking revelation, another wrestling veteran taking to the screen and playing to his strengths. Superb.

Look at this picture. It looks like four people got invited to a fancy-dress party where half the invitations said the theme was one thing and half said something quite different. It’s a metaphor for the movie.

If I don’t see King Shark in the next Aquaman movie, I’m going to flip something over. I’m just warning people right now.

So, what else can I say about this? It was a lot of fun. Most fun I’ve had at a DC movie since Aquaman. And Starro the Conqueror was hilarious, right out of the Watchmen movie they should have made instead of the one they did. Well worth checking out on the big screen if you can get to one, but I’d say not a huge loss otherwise if you’d rather catch it on TV (HBO Max, I believe). Is it a masterful comment from Gunn about the bullshit way he was hounded away from Disney a few years back? You tell me. But it was a damn fun movie.

I want to know where King Shark gets his shorts. Also, Captain Boomerang can still fuck off and stop making Australians look and sound like bogan cuntsnorts. I acknowledge that this outburst is doing nothing for our image on the international stage, but seriously mate. Fuck entirely off.

Nicely done, and up there with Birds of Prey and Aquaman in the “DC managed to mostly not fumble this one” file. I give The Suicide Squad a good DC movie out of a possible middle-of-the-road-or-maybe-even-better Marvel movie.

I’m not often driven to introspection or reflection, but the question does come up sometimes. The big question. So big, there’s just no containing it within the puny boundaries of a single set of punctuationary bookends. Who are these mysterious and unsung heroes of obscurity and shadow? What is their origin story? Do they have a prequel trilogy? What are their secret identities? What are their public identities, for that matter? What are their powers? Their abilities? Their haunted pasts and troubled futures? Their modus operandi? Where do they live anyway, and when? What do they do for a living? Do they really have these fantastical adventures, or is it a dazzlingly intellectual and overwrought metaphor? Or is it perhaps a smug and post-modern sort of metaphor? Is it a plain stupid metaphor, hedged around with thick wads of plausible deniability, a soap bubble of illusory plot dependent upon readers who don’t dare question it for fear of looking foolish? A flight of fancy, having dozed off in front of the television during an episode of something suitably spaceship-oriented? Do they have a quest, a handler, a mission statement, a department-level development objective in five stages? I am Hatboy. https://hatboy.blog/2013/12/17/metalude-who-are-creepy-and-hatboy/
View all posts by Hatboy →
This entry was posted in Hatboy's Movie Extravaganza and tagged comic book movies, DC movies, movie reviews, suicide squad. Bookmark the permalink.

2 Responses to THE Suicide Squad (a review)