As the Self-Published Science Fiction Competition kicks into gear, our judging team put together a nice intro page for the team (Space Lasagna) and each member. Special thanks to the Big Bearded Nerd (there are actually at least three impressive beards in our team, but we didn’t want to be all exclusionary about it) for pulling all this together and being the project manager for this event! Give his blog some love.

Here’s my version of the intro spiel, that was edited a bit for consistency on the main team page above.

Originating in southwestern Australia in the late 1970s, Edpool was raised on a diet of Doctor Who, Red Dwarf and books by Douglas Hill as often as Hill’s poor imitators Asimov and Clarke (fight me). He was deemed “too annoying” to be permitted into his school Dungeons and Dragons club. This left him with more time to read.

While science fiction remains his oldest and fondest friend, it was the epic fantasy (yes, that one) of Robert Jordan that led him to cross the world. Specifically, Arguing On The Internet on the old text-only forums of Usenet. There, while finishing off his very useful Bachelor of English degree, he honed his ability to review, critique, write appalling fan fiction and basically argue until his fingers bled. He fell in love with a she-nerd in Finland and moved there.

Like most immigrants in Finland, he’s been there ever since, and remains unsure why. He got a job writing instruction manuals for Nokia and did that through most of the smartphone revolution. He started a blog and reviewed some movies, some TV shows, and some books.

Edpool was diagnosed with colon cancer in 2011 and decided to make a book out of the harrowing and hilarious series of social media exchanges he collected about the ordeal, from first symptom to final clean bill of health. He decided that nobody was going to tell him how or what to write in a story so personal, and so he self-published it.

And then he thought hold on, all my stories are this personal. And so he started publishing science fiction and science fantasy and he basically hasn’t stopped since. He’s currently working on his 18th novel.

When not working his day job as a frazzled and despairing technical writer (read the fucking manual, people!), Edpool can be found adding the occasional uplifting bit of discourse on Twitter as well as mooching around Goodreads and attempting to sell his books on Amazon for convention money. 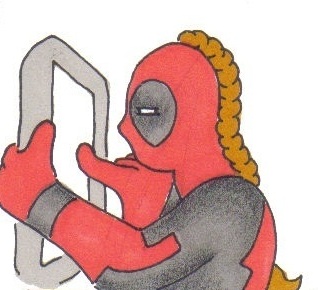 What brought you to SPSFC?

While exploring Independent Author Twitter I ran into SPSFC’s mum, SPFBO, and after literally minutes of soul-searching entered one of my most fantasy-esque stories in it. At the same time, I noticed there was a push for a science fiction version! Excited, I began planning to enter that too. Over-excited, I entered my blog, Hatboy’s Hatstand, as a potential part of the judging team instead. And here I am. Team Space Lasagna, Poop Deck Swabbie Edpool reporting for duty, ready to read a ton of books and mouth off about them all.

What is your favorite sci-fi subgenre?

I do love a good Ancient Alien or Advanced Culture space opera where humans are very much a lesser species and unimportant, if they’re even mentioned. My favourite Doctor Who stories were the ones where the humans were considered a nuisance on the level of rats in a ship’s hold, and I love a lot of Iain Banks’s Culture stories for the same reason.

If you were stationed at the lighthouse from Beacon 23, what 3 books would you be sure to bring along?

I guess one of them would be the Beacon 23 novel itself, because it would probably provide the closest possible thing available to a set of process and operation instructions (did I mention I’m a technical writer?). The other two would have to be a second copy of the same book in case I lost the first one, and a copy of Terry Pratchett’s Night Watch so I could show it to any aliens that turned up and started acting snooty. “A human wrote this,” I’d say with a jut of my chin, “so just shut your dillweed mandibles and sit down when your betters are talking.”

I’m not often driven to introspection or reflection, but the question does come up sometimes. The big question. So big, there’s just no containing it within the puny boundaries of a single set of punctuationary bookends. Who are these mysterious and unsung heroes of obscurity and shadow? What is their origin story? Do they have a prequel trilogy? What are their secret identities? What are their public identities, for that matter? What are their powers? Their abilities? Their haunted pasts and troubled futures? Their modus operandi? Where do they live anyway, and when? What do they do for a living? Do they really have these fantastical adventures, or is it a dazzlingly intellectual and overwrought metaphor? Or is it perhaps a smug and post-modern sort of metaphor? Is it a plain stupid metaphor, hedged around with thick wads of plausible deniability, a soap bubble of illusory plot dependent upon readers who don’t dare question it for fear of looking foolish? A flight of fancy, having dozed off in front of the television during an episode of something suitably spaceship-oriented? Do they have a quest, a handler, a mission statement, a department-level development objective in five stages? I am Hatboy. https://hatboy.blog/2013/12/17/metalude-who-are-creepy-and-hatboy/
View all posts by Hatboy →
This entry was posted in #SPSFC, Edpool and tagged #indiesff, #SPSFC, Edpool, independent publishing, shameless self-plug. Bookmark the permalink.