I was saddened this morning to learn of the death of Mira Furlan, who played (among many other roles) Ambassador Delenn on Babylon 5. Her performance was always full of heart and soul and quiet strength, the Minbari people and their class schism very much a founding inspiration for the Molren of my own fiction.

What I didn’t know about Furlan, which adds so much to her performance and my admiration of her, was that her early life had taken place in a travelling theatre troupe in civil-war-torn Yugoslavia, and she brought a lot of that ferocity to Delenn’s character. I can do no better than to quote the article here:

It is a night of great sadness, for our friend and comrade has gone down the road where we cannot reach her. But as with all things, we will catch up with her in time, and I believe she will have many stories to tell us, and many new roles to share with the universe.

When Mira Furlan came to audition for Babylon 5, her home country of Yugoslavia was in turmoil and shattering into two separate countries. During our first meeting, we spoke about her work and her life, and I learned that she had been part of a touring theater group that continued to cross borders of the disintegrating country despite receiving death threats from both sides in the civil war.

I expressed my admiration for her courage, but she shrugged and waved it off. “What’s the worst that could have happened? Yes, they could have killed me. So what? Art should have no borders.”

Very few people knew that side of Mira: the fiery, fearless side that fought ceaselessly for her art. She brought all of those traits to Delenn, and in turn I tried to write speeches for her that would allow her to comment on what was happening to her homeland without calling it out by name. I guess I must have done it correctly because one day during the Minbari Civil War arc, she appeared in my office door, a cup of tea in one hand, in full makeup but wearing a pull-over robe from wardrobe, and said, “So, how long did you live in Yugoslavia?”

Rest in peace, Mira. And thank you. 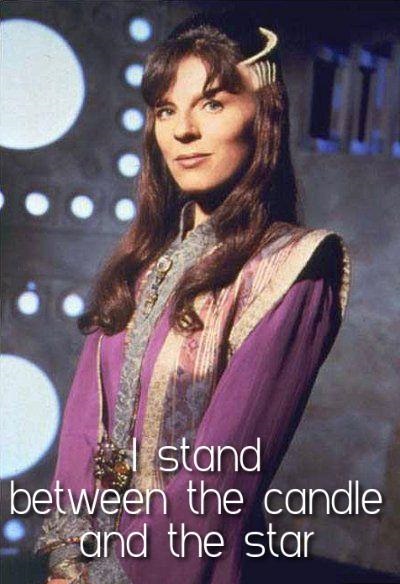 I’m not often driven to introspection or reflection, but the question does come up sometimes. The big question. So big, there’s just no containing it within the puny boundaries of a single set of punctuationary bookends. Who are these mysterious and unsung heroes of obscurity and shadow? What is their origin story? Do they have a prequel trilogy? What are their secret identities? What are their public identities, for that matter? What are their powers? Their abilities? Their haunted pasts and troubled futures? Their modus operandi? Where do they live anyway, and when? What do they do for a living? Do they really have these fantastical adventures, or is it a dazzlingly intellectual and overwrought metaphor? Or is it perhaps a smug and post-modern sort of metaphor? Is it a plain stupid metaphor, hedged around with thick wads of plausible deniability, a soap bubble of illusory plot dependent upon readers who don’t dare question it for fear of looking foolish? A flight of fancy, having dozed off in front of the television during an episode of something suitably spaceship-oriented? Do they have a quest, a handler, a mission statement, a department-level development objective in five stages? I am Hatboy. https://hatboy.blog/2013/12/17/metalude-who-are-creepy-and-hatboy/
View all posts by Hatboy →
This entry was posted in Office Posts, Random and tagged Babylon 5, mira furlan, obituaries. Bookmark the permalink.