I’m an artsy fartsy litwank creative type (you may have noticed!). When something comes along that claims to support individual expression or freedom of choice, I just have to do something different to everyone else to show I’m a special lil snowflake.

For example, when Facebook introduced a new range of avatars you could use for reactions … actually I made a pretty good-faith attempt to be a normie on that one, but when you chose the long hair braid the system automatically put you in the female body category with no recourse to male body types or clothes, and we’d need a whole new blog post to talk about that, we’re doing socioeconomics today not gender assumptions, so at that point I just decided to lean into it and gave myself a sexy romper and a beret and that, coupled with the big grey beard, turned me into transvestite Saddam Hussein and I’m kind of okay with it.

I won’t curse you with a larger picture, mostly because I couldn’t find one.

I was already sceptical of Animal Crossing: New Horizons by the time Wump got it for her birthday from the always awesome Itkoblooms, but to be fair the Itkoblooms were the ones who described the game to me and they’re the best kind of pinkos so what I got of the premise was this:

You arrive on a desert island, and this cartel of sleazy raccoons tells you that you owe them money for the trip as well as for the tent and phone they give you to survive. There is no immediate way of earning money so they allow you to pay your debt in “miles”, which is basically doing grinding-style tutorial side quests around the island. After a while, you pay off your debt and are free to enjoy your island paradise … except the raccoons immediately push you into getting a house, which is an even bigger loan. More people (animals) start showing up and you have to prepare places for them on the island, which requires more grinding to make furniture and gear for their houses…

There are also some issues with multi-player and online mechanics that I really don’t like about the game (or the Nintendo Switch in general), but that’s a whole other rant. What we ended up doing was letting Wump be the “owner” of the island (since it’s her game), even though technically the raccoons are in charge. Wump, whose in-game name is Ruby, is the main decision-maker and the only one who can influence the construction and development of “Tiny Isle”. The rest of us (me, Mrs. Hatboy, and Toop) have our own characters and we can do some stuff but mostly just grind and help Wump to build the community.

Oh, and there’s an additional player character on our island, because only one player profile can connect to a Nintendo account and go online (if and when I pay for a proper online subscription apparently), and you can’t swap them, and so this was the profile we nailed permanently to the online / multiplayer feature back when I got the Nintendo Switch.

So, the players in our little drama are:

There are also some other randos – a pair of dodos who run the only airline in and out of the place; a hedgehog whose shtick is selling turnips but has not displayed a single turnip in her inventory yet; a couple of other island residents; an owl who runs the museum once you build it; and more. It’s all very cute.

Yay! Here are the Nooks and a couple of others celebrating the opening of the island’s general store, which replaced the previous system which was “the Nooks have things and you can buy from them.”

Tom Nook’s nephews, Timmy and Tommy, run the general store. Nepotism and corruption are the least of their crimes, and I’m going to blow it all wide open.

I forgot to mention, the game operates on real time. So when it’s Monday at 22:15, that’s what time it is in the game. The shop closes at certain hours, they don’t trade certain goods on Sundays, and when you build a house or order something from a catalogue, it takes a few days for it to happen. It sounds painful (and I know there are cheats out there to fudge it) but it’s actually a pretty cool part of the game. Everything’s very laid-back. Also it means I have yet to play the game during in-game daytime. It’s usually around 21:00 in the evening when I sit down to do a bit of fish-insect-wood collection for my raccoon overlords and my firstborn Ruby who is the populist puppet dictator they have installed.

So. That’s the game. You build a little happy animal farm animal island, and enjoy a variety of fun little side-quests in the meantime.

I decided immediately that Big Papa was going to be a thorn in the Nook cartel’s side. 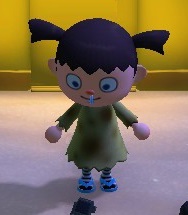 No way those stinkin’ trash pandas get me to march to their capitalist drum.

As you can see, I again had a problem with being a guy with long hair. This was the closest I could get so I again decided to lean into it and Big Papa is officially genderfluid. Subsequently, after my initial debt to the Nooks was paid off (I could have left it unpaid but I didn’t want to be beholden to them, and the starting loan is pretty small anyway), I decided they weren’t going to get a single cooperative moment from me from that point on.

I pitched my tent on the beach, got myself some camo clothes[2] and flip-flops, and refused any offer to “improve” or “scale up” that came along. I made my living picking flowers from the other players’ gardens and selling them to buy crude tools and DIY recipes. I fished and dug shit up on the beach. And I absolutely under no circumstances upgraded from tent to house. 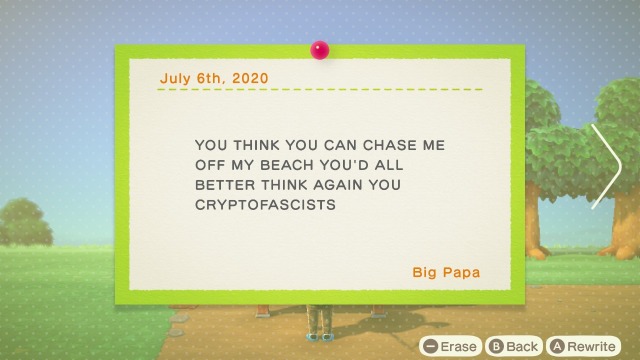 The Tiny Isle bulletin board (which you get grind-points for leaving messages on) was the first place I struck a blow for alternative lifestyle choices.

Amusingly, right after I left this message on the bulletin board, a gift appeared in the sky (floating presents sometimes appear, you can shoot them down and they contain an assortment of power-ups). I opened it to find it was a new piece of clothing I could wear. What was the clothing?

Like, a snot bubble hanging from your avatar’s nose.

This was the point at which I realised I was at war with Animal Crossing: New Horizons, and it would use every weapon at its disposal to deligitimise my life experience and choices. I put on the nose drip and wore it with pride. It became my symbol. It was the snot blob of freedom.

This is not to say I didn’t take part in society. No, I am part of the team and I do what I can to help Ruby out. She needs wooden block toys and furniture to fill a new resident’s house, I build stuff and leave it for her to pick up. I buy and sell (on my own terms!) and when I wind up with clothes I don’t want (that’s all of them, basically), I give them to Emma or whoever wants them.

The new building sites, incidentally, produce a lot of random waste and recycling materials that end up in a bin inside the Tiny Isle administration centre. I forage in that bin for gear, and that was where I found the “moldy dress” (actual name of item) that is now my garment of choice. I sold my camo shirt and now live ecologically and sustainably on recycled gear.

Nin10drone and Werhag (with whom Big Papa shares an uncomfortable love despite the fact that she is a blind happy cog in the Nook Machine) occasionally help me out with their better gear and resources, but there’s only so much you can do. And this is where the really insidious late-stage capitalism sneaks in. 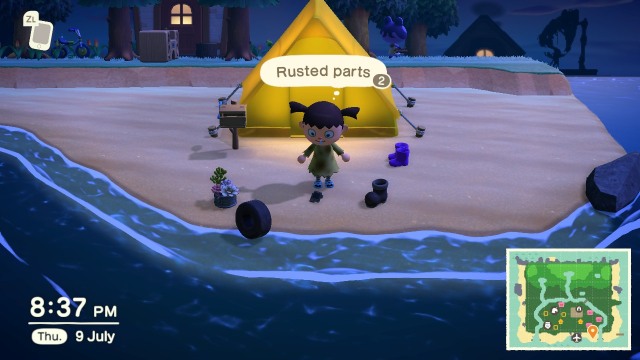 Did I have to turn my beach shack into a wasteland of discarded trash? No. No I didn’t. But the Nooks didn’t have to deny me the basic tools to improve my situation so here we are.

You can absolutely refuse to take out a giant loan and build a house. But there are a lot of in-game functionalities and bonuses that are not available to you until you do. New purchasing opportunities, access to DIY recipes that allow you to build metal tools that won’t break after a dozen uses, all of them are dependent upon “Nook Miles +”, a program in which you can only be enrolled once you have a home loan.

You are trapped, in short, in a self-perpetuating cycle of poverty and are unable to improve your situation, and the game is set up to make it look like it’s entirely your own fault for not playing right.

Refuse the loan, miss out on the bonuses. That feels like a choice, as presidential candidate West once said.

Oh, and you can’t buy plane tickets to get off the island without Nook Miles + either. This is a moot point since only Nin10drone can go (in theory) fully online multi and go to other player character communities, but the other players on Tiny Isle can go to randomly generated islands to farm better resources and things you can’t find on Tiny Isle.

All of them, except Big Papa.

This experiment is still in progress. I am obviously nowhere near the first person to eschew the alluring baubles of Animal Crossing: New Horizons capitalism and remain in the neotenic tent stage. And there are probably ways for me to acquire airline tickets and other gear. But so far, this has been a very enjoyable way of sticking it to the man and holding up a mirror (possibly upcycled from a rusted car wreck I found while snorkelling) to consumerist society.

I look forward to the day Tiny Isle becomes a thriving cosmopolitan metropolis of paved roads and electric lights. Big Papa will still be squatting on the beach, nose drip on proud display, surrounded by the rest of the garbage left behind in the tank-treads of the unfeeling juggernaut of progress.

[1] It will probably not surprise you to know I chose the name of this communal entity as a form of protest against the fact that Nintendo doesn’t allow each player to have their own individual self-determination.

[2] Not pictured above. It was a bit of a rigmarole, as I mentioned, to get screenshots and share them online so I only took a few. This dress is a whole other story, I’m getting to that.