-actually the Jumbo shopping mall and cineplex on Monday to watch the sequel Frozen was always going to get.

It was actually pretty great! I went in thinking Wump and Toop were going to get their first real dose of Sequels Are Always Basically Shit, and damn it, Disney pulled out a win on this one.

Still can’t for the life of me figure out why my firstborn, whose name is Elsa and who is blonde and loves horses, liked this movie so much. It’s just a goddamn motherfucking mystery is what it is.

I went in expecting a decent story and a bit of classic Disney fun, since I’d heard from a couple of sources that it was good. And Wump, Toop and Mrs. Hatboy had gone to see the Finnish-dubbed[1] version a few days earlier and Wump at least had insisted that it was better than the first one, so that was something. But I guess I was still jaded and knew not to expect too much from a sequel.

[1] The Finnish, not the Sámi. I understand now, having seen the movie, why the movie got a special Sámi dubbing. I mean, it was pretty obvious why already, but yeah. Of course it did. Well played.

This movie expanded on the first without introducing much in the way of complicated new stuff that doesn’t fit. It’s like the filmmakers and writers had familiarised themselves with the actual story before making an addition to it that folds into the existing plot threads. Not something I’ve come to expect from Disney, to be frank. But this was really nicely done. And if we still don’t understand why the trolls are such dufuses, at least we get why Elsa’s and Anna’s parents were scared. Their dad in particular.

The cinematography, if you can call it that in a CGI movie, was stunning. The animation was beautiful. And the songs, while I’ll obviously need to see the movie another 35 or 40 times before a final verdict, were good. Not Let It Go good, let alone How Far I’ll Go good, but solidly good. They have a message that speaks to us beyond their precise context in the movie’s story, which is what a song needs in order to escape the bonds of the movie soundtrack. Kristoff’s ’80s-style power ballad was a fucking masterpiece. 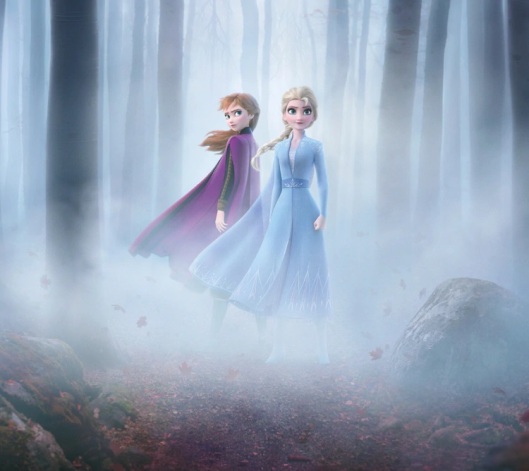 The atmosphere was amazing throughout.

Olaf’s ongoing existential crisis regarding maturity and the nature of the world, both in the story and in his song, was *kisses fingertips* mwah. I had an extended belly-laugh at the idea that Olaf’s main songs in Frozen and Frozen II should both rightfully have ended with a wiser character saying “somebody’s got to tell him.” Yeah no, snowmen melt in spring and nothing makes more sense when you’re an adult, you just learn to hide it from the kids because that’s your job.

The innumerable little references to the first movie, the winks at the audience who have lived and breathed Frozen since 2013 and are now a bit older and wiser and crustier, the game of charades the characters play at one point … oh my God. Just perfect.

I will, however, be holding Disney to the “no, this is it, we’re done” explicitly stated in this movie’s script though. No Frozen III will be accepted. Quit while you’re ahead.

Thoroughly enjoyable and worthwhile movie, your kids will love it and your adults will not regret the money they forked over. I give Frozen II a Leeloominai Lekatariba Lamiatcha Ebat de Sabat out of a possible Leeloo. No, that wasn’t Sámi but it was a deep-nested reference. Go see the movie.

I’m not often driven to introspection or reflection, but the question does come up sometimes. The big question. So big, there’s just no containing it within the puny boundaries of a single set of punctuationary bookends. Who are these mysterious and unsung heroes of obscurity and shadow? What is their origin story? Do they have a prequel trilogy? What are their secret identities? What are their public identities, for that matter? What are their powers? Their abilities? Their haunted pasts and troubled futures? Their modus operandi? Where do they live anyway, and when? What do they do for a living? Do they really have these fantastical adventures, or is it a dazzlingly intellectual and overwrought metaphor? Or is it perhaps a smug and post-modern sort of metaphor? Is it a plain stupid metaphor, hedged around with thick wads of plausible deniability, a soap bubble of illusory plot dependent upon readers who don’t dare question it for fear of looking foolish? A flight of fancy, having dozed off in front of the television during an episode of something suitably spaceship-oriented? Do they have a quest, a handler, a mission statement, a department-level development objective in five stages? I am Hatboy. https://hatboy.blog/2013/12/17/metalude-who-are-creepy-and-hatboy/
View all posts by Hatboy →
This entry was posted in Hatboy's Movie Extravaganza and tagged disney, film reviews, frozen, frozen 2, movie reviews, movies, sequels. Bookmark the permalink.

4 Responses to Frozen II (a review)