On Saturday the Bros (minus The Pas) sat down to watch a trilogy of sorts. Okay, they were all different movies by different creators and telling different stories, but when Mr. Fahrenheit picks a movie theme, he has a habit of finding movies that can be tied together into merged continuities quite easily. I mean, I haven’t quite figured out where it fits into The Core‘s expanded universe yet, but I guess this cursed ground in New England is one of the fall-back sites referenced in The Cabin in the Woods. Or something. Work in progress.

We started the night with The Witch (or The VVitch: A New-England Folk Tale), an acclaimed and well-received little psychological thriller. It had an excellent cast and some great performances, even if what they were performing was a bit overblown and difficult to process. This was one that got more intriguing and impressive the more you thought about it. Was any of it real? Hallucination? Religious hysteria? You can really believe what you want, which is in itself an interesting statement about faith. 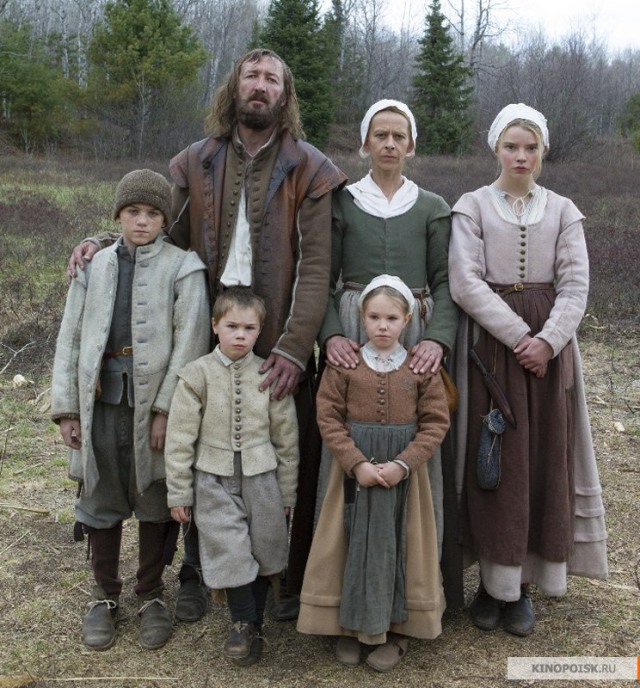 Lysa Arryn and Dagmer Cleftjaw run away from it all and start a new family, only to find that the Drowned God and weird breast-feeding habits have a way of catching up with you.

Very creepy, with some truly hair-curling moments of disgust (and I’m not even talking about the gore, which is very much present but well executed). I don’t quite have the same enthusiasm for it as some, but I don’t have anything specifically bad to say about it – just not really my kind of movie. Definitely interesting and fun to watch, though. I’ll give it a Sleepy Hollow out of a possible Sauna.

Bonus points for chopping wood in a horror movie. Bonus points removed for how suspiciously evenly-sawed all those logs were. Made me very suspicious and I think it was in fact witchcraft.

The next movie we watched was The Autopsy of Jane Doe. This started out interesting with a scattering of random plot-points and jump-scares, and ended up as a mass of jump-scares woven together with a very rough attempt at some kind of plot that I have to admit didn’t make a whole lot of sense.

Another couple of good performances, from the legendary Brian Cox and from Emile Hirsch who was playing his son. The corpse also did a good job, I don’t think she blinked.

Not even when they stuck her with the witch-finding pin.

I’m not certain what was really going on in this one, and how (or even if) the murders in the first act linked up to the finale, or what the witch’s regeneration and in fact what her whole deal was all about. I just, nope. But she was probably maybe kinda from the same time period and New England locale as the first movie’s setting, so there’s our link-up.

“There’s no outward sign of this movie being bad, but once you start to take it apart it’s a real fucking mess, son. Maybe that’s the message here.”

I’ll give The Autopsy of Jane Doe four and a half Strykers out of a possible Agamemnon. Moving on.

Our third movie, apparently completing the downward slide from High Cínémá to Hollywood popular trash, was The Babysitter. However, this was a surprisingly entertaining and enjoyable movie, admittedly in the light-and-popcorny sort of way I’m more used to.

Why was American Psycho guy shirtless? I mean, aside from the in-movie reason provided, which was perfectly acceptable.

I was expecting something along the lines of The Hand That Rocks the Cradle, but ended up with a mixture of The Craft and Scouts Guide to the Zombie Apocalypse. It was a very pleasant surprise, and it was further enhanced by the excellent comedy in it, the enjoyably rounded-out villain roles, and the fact that I was several sheets to the wind by this stage of the evening.

And I’m not even making a snide allusion to the movie babes with that “rounded-out” lime. The bad guys were actually (okay, most of them) given decent lines and characters – if not quite so solid as the cliché-busting college student victims in The Cabin in the Woods, then at least better than plenty of movies in this genre. It just goes to show that it’s not fucking difficult, Hollywood.

Apologies for the spoiler, but this whole scene was pretty funny.

There’s not a lot to discuss with this one. dreameling and I were rooting for Bee to not be the baddie we knew she was going to turn out to be, but I won’t spoil it beyond the fact that of course she was always going to be … just maybe not quite in a way anyone could predict. It was nicely done. And the friendship between Bee and Cee was all the more gut-wrenching when … I mean look at me, I’m talking about the character interplay in a splatter comedy.

The Devil’s Book alluded to in The Witch was back in this movie, showing how the whole thing went full circle and connected up. The coven, active in 1630s New England and then uncovered once more in a shonky autopsy room hundreds of years later, is back and – well, there’s going to be a sequel so let’s see what that looks like. My expectations are low and my hopes are high. I award The Babysitter a Samara Weaving out of a possible Falcor. And I’m definitely not going to explain that one.

I’m not often driven to introspection or reflection, but the question does come up sometimes. The big question. So big, there’s just no containing it within the puny boundaries of a single set of punctuationary bookends. Who are these mysterious and unsung heroes of obscurity and shadow? What is their origin story? Do they have a prequel trilogy? What are their secret identities? What are their public identities, for that matter? What are their powers? Their abilities? Their haunted pasts and troubled futures? Their modus operandi? Where do they live anyway, and when? What do they do for a living? Do they really have these fantastical adventures, or is it a dazzlingly intellectual and overwrought metaphor? Or is it perhaps a smug and post-modern sort of metaphor? Is it a plain stupid metaphor, hedged around with thick wads of plausible deniability, a soap bubble of illusory plot dependent upon readers who don’t dare question it for fear of looking foolish? A flight of fancy, having dozed off in front of the television during an episode of something suitably spaceship-oriented? Do they have a quest, a handler, a mission statement, a department-level development objective in five stages? I am Hatboy. https://hatboy.blog/2013/12/17/metalude-who-are-creepy-and-hatboy/
View all posts by Hatboy →
This entry was posted in Hatboy's Movie Extravaganza and tagged bromantic movies, film reviews, movie reviews, the autopsy of jane doe, the babysitter, the witch, vvitch. Bookmark the permalink.