Well, work starts in a few hours and that means my Write Weekend is over for this year.

My Write Weekend, in case I haven’t mentioned it before, is the 2-4-day stretch where Mrs. Hatboy goes to the summer cottage with Wump and Toop to dye wool and hang out with the other Daughters of Thanos, I mean Handicrafts. 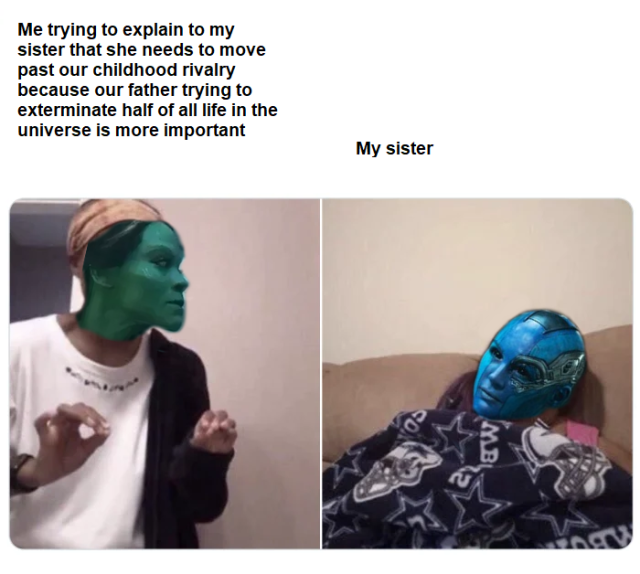 They are generally as badass as the Daughters of Thanos and have slightly less drama. There wasn’t a good picture of Gamora and Nebula according to my 01:30am brain so making this one seemed like a worthwhile use of my time.

Anyway, what that means is that I am left on my lonesome for between 1 and 3 days more than I should be, because I start to go strange. It’s probably for the best that I have to back to work tomorrow, and that my ladies are coming home to take care of me again.

I kid, it’s been a fun weekend but it’ll be nice to see Mrs. Hatboy and my dorks again. I’ve managed to keep the hamster alive but she’s not very happy without Wump in the house paying attention to her. And I actually managed to feed myself better than some of my friends were worrying – I made a big mess of Mostly Vegan Nachos (I used muru instead of mincemeat, but the sour cream and cheese and nacho cheese sauce were non-vegan) that got me through a couple of days.

Best of all, I got a lot of stuff written! I’m almost done with the titular (heh) story for the Panda Egg anthology, with 14 of the 19 theria finished and the final 5 pretty much ready aside from a bit of fill-in-the-gaps and join-the-dots. Since Thursday night, I estimate I have written about 30 pages, just over 12,000 words. Which ain’t bad, considering I also sat eating nachos for quite a lot of time.

I consider my Write Weekends a fun little experiment in “what would it be like if I could actually quit my job and write full-time for a living instead?” It’s nice. Probably something I’d have to temper into a marathon-slog rather than these damn fool sprints I do on Write Weekends, but I think it’s safe to say that if I ever manage to get a living wage out of my books, I’ll be able to finish way more books than I currently have.

And I know, I have done quite a few books. It’s just that this year hasn’t been that great for me, book-wise. So with any luck I’ll be fixing that soon!

After I finish Panda Egg (and I’ll be posting up a bit of it for you later this morning while I commute to work), there are a final couple of stories I need to finish off for the anthology. But they’re a bit easier, since they’re the final bits of existing stories I’ve put on the blog before. I don’t need to start from scratch, create new characters for my PayPal benefactors, and plan the whole thing out quite so much.

I’m not often driven to introspection or reflection, but the question does come up sometimes. The big question. So big, there’s just no containing it within the puny boundaries of a single set of punctuationary bookends. Who are these mysterious and unsung heroes of obscurity and shadow? What is their origin story? Do they have a prequel trilogy? What are their secret identities? What are their public identities, for that matter? What are their powers? Their abilities? Their haunted pasts and troubled futures? Their modus operandi? Where do they live anyway, and when? What do they do for a living? Do they really have these fantastical adventures, or is it a dazzlingly intellectual and overwrought metaphor? Or is it perhaps a smug and post-modern sort of metaphor? Is it a plain stupid metaphor, hedged around with thick wads of plausible deniability, a soap bubble of illusory plot dependent upon readers who don’t dare question it for fear of looking foolish? A flight of fancy, having dozed off in front of the television during an episode of something suitably spaceship-oriented? Do they have a quest, a handler, a mission statement, a department-level development objective in five stages? I am Hatboy. https://hatboy.blog/2013/12/17/metalude-who-are-creepy-and-hatboy/
View all posts by Hatboy →
This entry was posted in The Chucky Report and tagged daughters of handicrafts, sleep deprivation, write night, Wump and Toop. Bookmark the permalink.