From the country that gave us Greta Thunberg, Elin Ersson and a seemingly endless parade of progressivism and intelligence and basic decency (not to mention a lot of shrill contard broflakery about how immigrants have been allowed to set the whole country on fire and rape everybody all the time but it’s a big cover-up because the left can’t bear to criticise Muslims or something), I now bring you this fine example of true humanity.

So much grotesque smirking stupidity. These yellow-vested fucksnorts are wasting my daughters' oxygen. I have endless admiration and friendship for that indomitable, astonishingly brave Swedish human – for putting up with it for so long. Sweden's alright.https://t.co/VhetozVvO5 https://t.co/JpT3T0otD5

Don’t worry, I’m going to break it all down.

People are throwing milkshakes at fascists now. They are 110% right to do so. 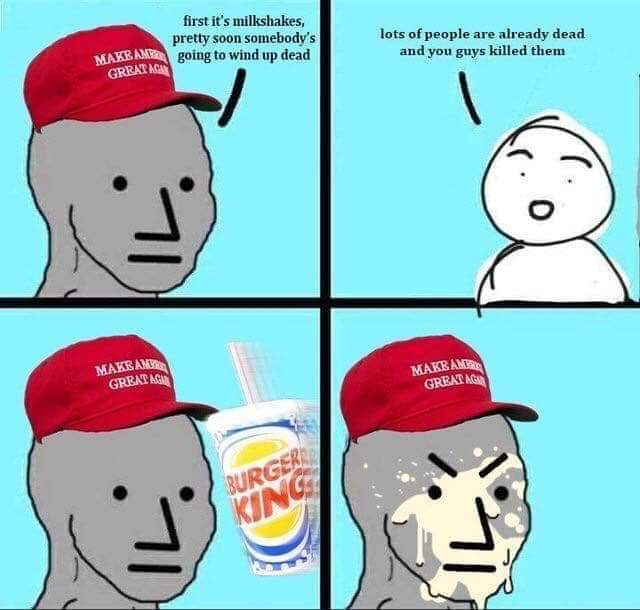 My only objection is the waste of milkshake and squandering of food, but that’s only stopping me from declaring it 120% right.

The tweet regards a guy who got milkshook and the human garbage who are upset about it. And his apparent history with the pro-Brexit, climate change denying, generally disgusting yellow-vest demonstrators.

From there, we get to this video. And I should warn you, it’s hard to watch. Not because of anything physical, but there’s a lot of yobbos heckling, spewing hate, and there’s discussion of rape there too for a brief moment. Mostly though it’s just the soul-hurting stupid of it all.

There’s issues here, of course. These yellow-vest shitheads aren’t waving swastikas or declaring outright for a white ethnostate (you know, aside from, uh, Britain), so we can’t call them out too strongly. They get to march and declare for what they want, even if I hate what they want with every fibre of my being. They’re allowed to be racist and ignorant (and yes, they absolutely are racist, even if you don’t listen to anything they’re saying and chanting, Brexit by its very nature is fuelled exclusively by low-key racism), even if we don’t like it. Especially if we don’t like it – harden up, libtards.

And by the exact same token, she gets to call them out and criticise them.

Could she have done it better? Sure. Always. She was just on her way somewhere and decided to stand up to ignorance and hate. She had a language barrier to contend with. She’s clearly young and full of fire. She’s a reformed rasta-hippie probably guilty of cultural appropriation. I can’t really criticise any of that. She did as well as she needed to. She stood up. She expressed herself better than the natives. She showed that there are still people who disagree with this vile ideology. She was the superior human.

Both sides being (legally, socioculturally, regardless of my personal opinions) equal, then, you need to look at the ideologies and opinions and statements on display by each side, the behaviour of each side, and the level of discourse at play. Neither level, I admit, is necessarily particularly high. You don’t need to approve of either. Make up your own mind.

On the Swedish libtard’s side, we have:

On the yellow-vest side, I caught:

There was more, but listening to those unutterably thick and obnoxiously smug wastes of resources just got draining. As I’ve said before, I’m unwilling to give these shitstains a single synapse spark more than they deserve. And they don’t deserve many.

Hats off, Sweden. Somehow amidst all the burnings and rapemurders that your hopelessly libtarded citizens happily allow to happen, you’ve managed to produce people with keen minds and good hearts who aren’t afraid to stand up to a crowded street full of belligerent dipshits. Alone.