I couldn’t in good conscience go on with my silly prattling without mentioning a little thing some clever, clever humans did just the other day.

As you’ve probably heard by now, the Event Horizon Team (way to take a black hole term that has been made creepy by movies and make it your own again!) successfully captured images of a black hole, which is … just fucking amazing.

Specifically, the black hole is the supermassive one in the centre of Messier 87, a galaxy 55 million light-years from the Milky Way. And while I’m tempted to make a flippant and self-serving post about my stories placing all these things on a sackcloth backing somewhere at the edge of our solar system, this is just too wonderful. Today, science smacks fiction with the rolled-up newspaper of true human ingenuity and says don’t you get uppity with me, you self-inflated little expression of basically make-believe.

The black hole is forty billion kilometres across, has a mass six and a half billion times that of our sun, and look, you can get more facts here, or here, or here (a particularly important one about Katie Bouman and her team, and the algorithm they created to make all this possible).

I’m just excited and can’t get enough of the pure joy that I’m seeing running through so many of my friends about this. I’m sure tomorrow we’ll be back to muttering that scientists are smarmy elites who don’t know as much about the world as they pretend they do, but for now let’s just enjoy the astonishing density of something a safe distance away from us. 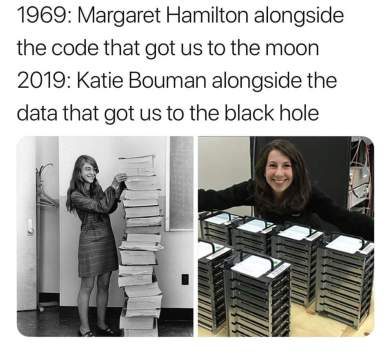 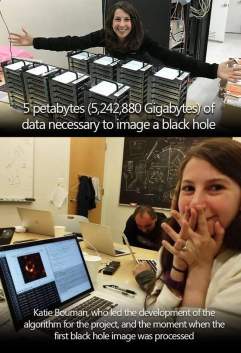 In the meantime, bless the hearts and the big wonderful brains of these fantastic humans.

There’s another great break-down of what this discovery tells us at Forbes, which is well worth a read.

– Posted on my coffee break. Worth it.

I’m not often driven to introspection or reflection, but the question does come up sometimes. The big question. So big, there’s just no containing it within the puny boundaries of a single set of punctuationary bookends. Who are these mysterious and unsung heroes of obscurity and shadow? What is their origin story? Do they have a prequel trilogy? What are their secret identities? What are their public identities, for that matter? What are their powers? Their abilities? Their haunted pasts and troubled futures? Their modus operandi? Where do they live anyway, and when? What do they do for a living? Do they really have these fantastical adventures, or is it a dazzlingly intellectual and overwrought metaphor? Or is it perhaps a smug and post-modern sort of metaphor? Is it a plain stupid metaphor, hedged around with thick wads of plausible deniability, a soap bubble of illusory plot dependent upon readers who don’t dare question it for fear of looking foolish? A flight of fancy, having dozed off in front of the television during an episode of something suitably spaceship-oriented? Do they have a quest, a handler, a mission statement, a department-level development objective in five stages? I am Hatboy. https://hatboy.blog/2013/12/17/metalude-who-are-creepy-and-hatboy/
View all posts by Hatboy →
This entry was posted in Hatboy's Nuggets of Crispy-Fried Wisdom and tagged amazing monkeys, black holes, event horizon team, humans, messier 87, science, science and shit, technology. Bookmark the permalink.