I went with Wump and Toop to watch the gritty reboot of Dumbo on Tuesday, and got pretty much what I’d been expecting. 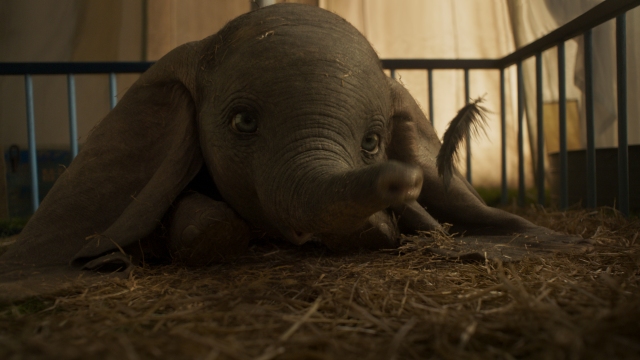 It was fine. The parts that followed or called back to the original were cute (I’m 95% certain there was a little marching band in there that were a direct reference to the infamous crows), and the parts that veered off or fleshed out the original were also fine. I had my doubts about the human stories, but since the animals no longer had talking roles I suppose that was inevitable

I also had my doubts about the central family, since their story seemed like a huge cliché … but ultimately, I bought into it. I cared about Farrell’s failings as a father, his experiences in the war and as a veteran, and his role in the circus as an extended “family” metaphor. They still could have taken it much farther, I think, but they also had to fit in the daughter’s progressiveness (which was great, even if that too could have been folded in better and to more profound effect), and DeVito’s arc along with all the other circus performers. They actually did nicely and made it quite sweet, touching and comfortably simple, so I really can’t object too much. Just lacked a certain … something.

Green’s attachment to the family as replacement mother came out of absolutely nowhere, though. That was not necessary and really undercut the character growth of the single dad. And it’s not like her assumption of the “same job in a smaller but more caring circus and also she’s the kids’ stepmother now” is a story that needed to be told, you know, culturally. I don’t know, maybe I’m reading too much into it or expecting too much of a children’s movie. It was fine. But, like the rest of the central characters’ arcs, it could still have been wrapped up in a better way to impact parent and child viewers alike.

Some complaints, for example that they took the main point of the original movie and revealed it and used it as an Act 1 climax, just don’t hold up. I would have died of boredom and frustration waiting for the goddamn elephant to fly if we’d had to wait an hour and a half or more – and I was expecting exactly that, going in. I was pleasantly surprised that they got it out of the way early. I was grinding my teeth in annoyance the first time the kids said “the goddamn elephant can fly” and the dad was like “don’t make up stories, science girl, elephants can’t goddamn fly.” I’m completely done with the Adult Doesn’t Believe Kid Until Plot Point trope.

And let’s face it: if you’re watching this movie and you don’t know the goddamn elephant flies, then what are you even doing with your life? And if your kids haven’t seen the original, are you a fit parent?

And all that aside, the original movie was barely an hour long. They can’t make a movie that short now, and that means they’d need to drag out the flying of the goddamn elephant even more. Which would leave us with a nearly-two-hour episode of Carnivale without any of the interesting characters and with an elephant that doesn’t goddamn fly until just before the credits, and that would suuuuck.

What else? Well, it was nice to see Burton pals Michael Keaton and Danny DeVito back on the screen opposite one another after winning a permanent place in my heart with Batman Returns. And their roles were eerie echoes of Wayne and Cobblepot, now I come to think of it.

They could have cast Michelle Pfeiffer instead of Eva Green to make it a full house, but I guess it’s fine.

I’m also glad to see I wasn’t the only person who saw Keaton’s acquisition of DeVito’s little troupe, and subsequent brutalising and barefaced screwing over of all involved, as a thinly-veiled (but entirely incidental) dig at Disney’s voracious consumption of the entire entertainment world.

I mean, we may not get a better chance to see this allegory in action until Disney reboots The Fantastic Four and Galactus in 2021.

So, all in all it was a fun evening out with the kids. Great to see in 3D at IMAX, and probably also a nice one to add to the family Disney collection, but ultimately probably could have been done better and gone all-in on harvesting those sweet, sweet adult tears. I’m going to give Dumbo a regular alcohol out of a possible whatever the fuck kind of alcohol makes a juvenile elephant with the mass of a small car actually hallucinate.

I’m not often driven to introspection or reflection, but the question does come up sometimes. The big question. So big, there’s just no containing it within the puny boundaries of a single set of punctuationary bookends. Who are these mysterious and unsung heroes of obscurity and shadow? What is their origin story? Do they have a prequel trilogy? What are their secret identities? What are their public identities, for that matter? What are their powers? Their abilities? Their haunted pasts and troubled futures? Their modus operandi? Where do they live anyway, and when? What do they do for a living? Do they really have these fantastical adventures, or is it a dazzlingly intellectual and overwrought metaphor? Or is it perhaps a smug and post-modern sort of metaphor? Is it a plain stupid metaphor, hedged around with thick wads of plausible deniability, a soap bubble of illusory plot dependent upon readers who don’t dare question it for fear of looking foolish? A flight of fancy, having dozed off in front of the television during an episode of something suitably spaceship-oriented? Do they have a quest, a handler, a mission statement, a department-level development objective in five stages? I am Hatboy. https://hatboy.blog/2013/12/17/metalude-who-are-creepy-and-hatboy/
View all posts by Hatboy →
This entry was posted in Hatboy's Movie Extravaganza and tagged disney, dumbo, film reviews, movie reviews, reboots, tim burton. Bookmark the permalink.