Having looked forward to seeing this movie for a couple of years now, I was fortunate enough to watch it in IMAX 3D last night, in the company of our regular blockbuster-viewing nerd group and sitting next to my [absolutely probably within movie-viewing age restrictions]-year-old firstborn. As such, I was blessed to be able to watch this movie not just through my own rosy and low-standards lenses, but through the additional filter of an enthusiastic [absolutely probably within movie-viewing age restrictions]-year-old.

I was trying to come up with some witty caption about how the Little Mermaid got tired of living with a nutjob Jack Sparrow-type and then I realised this was Amber Heard and it all just got way too real way too fast. Caption ends.

So, on with the review. Let’s start with the minuses, because as far as I’m concerned there weren’t many but they did affect my overall enjoyment of the movie.

First, and mainly, there was the script – and the writing in general. This sounds particularly bad but I’m not going to sit here and say it was terrible and I could have done better (this isn’t Geostorm). I mean, any old jerk can make tweaks to a story. But I really feel like this was DC’s chance to Ragnarok that shit, and they settled for adding a whole bunch of those anticlimax-chuckles that they really sort of bomb at. You know, there’s a dramatic / triumphant / revelatory buildup in the music and the character is about to do something pivotal … and then they just say “huh”, or drop something, or – in this case, which was at least mildly amusing – get blown up by a missile. I call it the dramatic build and sudden deflate.

Here, it’s irritating. It’s like they’re trying to copy Marvel’s style and throw Star Lord wit in there, but they can’t because Aquaman is not Star Lord and – bless him – Jason Momoa is not Chris Pratt. And DC’s witty one-liners and exchanges only very, very rarely hit the mark. There were one or two in this movie, and they were good … but there were at least six or seven clear misses. You know, like Superman and Batman doing the “I thought she was with you” joke despite the fact that Batman absolutely invited Wonder Woman to join them so there’s no way he would think she was with Superman. It was like a selection of scenes were given to a special one-liner writer and he or she was told to “just pepper in a few quips like Iron Man does” but he or she was not given the full script. So the lines just didn’t make sense in context.

And that’s another pretty big thing – not a problem in my case but still, a problem: DC has bet everything on Batman grimdark black and let it ride, and now it’s too late to change because they’ve got their house and their kids’ college fund on there and the whole thing is just about as overloaded as this metaphor. Anyway, my point is they can’t do Ragnarok, and about their best bet for comedy is the sort of spooky crazy-fuck comedy of the Joker and Harley. And they did that not-awfully in Suicide Squad, in my opinion – they just need to lean into it harder.

Their options for flamboyant campity are limited, but they could absolutely have used the “two worlds” fallacy of surface and sea to do it – and do it fantastically. Everything above ground (and inside human submarines, for example): grimdark. Everything under the sea: singing cultural-appropriation crabs[1], phosphorescent war-jellyfish and whatever shade of red hair is apparently running in Dolph Lundgren‘s family.

[1] Or in this case, a giant drum-solo octopus.

And Jason Momoa is the perfect straight-man comedic actor to pull off the merging of those two worlds. It could have been glorious.

And when I say he’s capable of comedy, I don’t just mean “being a huge stoic badass flung into hilariously inappropriate situations”. I mean whatever this is, too. Like I said, glorious.

So yeah, the writing and the overall mood of the movie were a bit all over the place, and in the writing’s case mostly a pretty crappy place. But I honestly don’t care about any of that because I can forgive a lot for something that’s just plain fun to watch. And Aquaman was.

Oh, and there were a couple of middle-of-the-road things that were kind of funny and irritating, but didn’t really bother me one way or another. Mostly to do with King Orm. Like:

Did they go out of their way to make him a multiple-generation Oedipal megacuck? Aquaman’s dad boinked his mum, and then Aquaman you can be fairly certain boinked the caviar out of his wife-to-be within eight minutes of Orm being led away by the guards at the end. 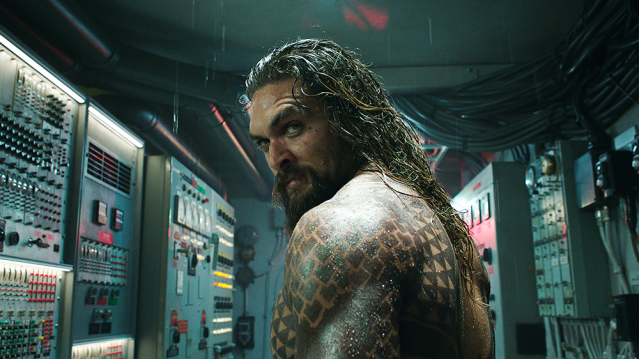 Also, speaking of five to eight minutes, just once I would like to see a Very Important One-On-One Duel Scene which didn’t go on for an inordinate amount of time. I get it, they do swooshy things with their weapons of choice and they punch and kick each other into things and go “urrgh”. I absolutely do not give a fuck. I give aggressive negative fucks. At least in the bigger fight scenes there are more interesting variations. The duel trope is boring[2]. Just once, I’d like them to build up to the fight, exchange their insults and challenges, the fight starts – and then the hero immediately stabs or punches the villain’s head completely and literally off. Or kicks the villain in the crotch so hard the villain’s pelvis lodges in his or her brain. That would be one case where the dramatic build and sudden deflate would work nicely. Provided you didn’t do it as much elsewhere.

[2] Except when the duel takes place in THE RING OF FIRE and it’s Willem Dafoe in the scene again and that shit was just goddamn hilarious and I think I was the only person in the cinema laughing and if DC had any sack – any sack at all – they would have referenced the fuck out of that. Heck, they could have then shouted back to it by Mera asking “you can speak whale?”

Also, that gif has a typo in its text.

Mrs. Hatboy suggested that the choreographers need something to do. I say, if the writers haven’t been given anything to do, why should the fucking choreographers? It even would have worked in terms of structure because Aquaman had two archenemies in this movie, so either Water Killmonger could have been one-shotted, or King Orm could have been, giving us a fun subverted expectation and clearing the decks for the main villain.

I liked a ton of stuff about the movie, though.

First and foremost, as an unabashed lover of BSTs and Hollywood schlock (and I freely acknowledge that this will be a drawback to many viewers), there was a lot to love here. The entire undersea kingdom was a feast for the eyes, if not quite on the level of Valerian then a solid Avatar. There were cool ships and cool creatures and a ton of both got blowed up.

The 3D was spectacular and very subtly done. Totally immersive (pun … okay, slightly intended). And Wump absolutely loved it, which was so fun to see. Lot of love for that.

I greatly enjoyed the lore and world-building, even if I’m having trouble seeing how it all makes sense with relation to what we’ve already seen of DC’s attempted expanded universe. I guess we just have to take it for granted that they haven’t thought this through very well and none of it will really match up. But it sure was fun to watch.

I loved the reveal when the not-by-any-means-a-kraken was talking to Aquaman / herself, and it turned out she didn’t realise he could understand her. That was really cool and clever.

Momoa, Heard, Dafoe and Morrison were great. Wilson and Abdul-Mateen had some really nice moments with their characters. Lundgren and Kidman didn’t seem to have much to play with, possibly because of their price tags but I really can’t see how that can be an issue anymore, they’ve definitely reached the point where they should be grateful to be cast, they ain’t neither of ’em Helen Mirren. I don’t mean that in an unkind way – they’re still great, but we ain’t none of us Helen Mirren. All I’m saying.

This was a fun night out for family and friends, and I would happily watch any additional Aquaman adventures, just as I will very happily watch further Wonder Woman adventures. Aquaman has taken (admittedly reasonably distant) second place to Wonder Woman at this point, in my lazy DC universe ranking system of “two movies that weren’t shit, and then all the rest which were kind of shit even though I didn’t actively hate them except all the Batman ones with goddamn ninjas in”.

I mean, let’s not kid ourselves, I’m probably also going to see any and every other big DC blockbuster that comes out, although hopefully I will still be able to ride relatively cheap into the IMAX cinema on Mr. Bloom’s coattails. It’s just that I’ll go and see Wonder Woman and Aquaman movies sober.

– Posted from my Huawei mobile phone while waiting for the bus.

6 Responses to AQUAMAN (a review)