Over the weekend I had two Christmas parties back-to-back, which was fun but exhausting (and let’s not even talk about the fact that I single-parented four kids on Sunday). The first was a work bash which was grand, and the second was the traditional Bar Äijä’s Christmas party for the roleplay group (with special guest appearance by birthday boy cousin-in-law Chris), which was equally grand.

At this latter party, we fired up the Bar Äijä’s Blu-ray player and put a selection of Christmas classics on in the background while we ate moose and cake. We wanted to put on Die Hard but I couldn’t seem to locate the 3-or-4-movie box I was sure we had, sometime. I need to stop lending shit to my jerkarse friends.

1. Jingle all the Way

This is very much a roleplayer group Christmas tradition by now, since Saila brings it every year and forces us to watch it. This touching prequel to True Lies before they changed the cast to include Jamie Lee Curtis and Eliza Dushku is full of laughs and sentimental moments. Like the moment Arnie punches a reindeer, and the moment when Phil Hartman hadn’t been murdered by his wife.

What can one say about this movie? It was a more innocent time, when bomb threats were funny and Sinbad could have seventeen police handguns pointed at him without tragically acute suspension of disbelief. Before Star Wars Episode I ruined Jake Lloyd for everyone and Jim Belushis roamed the Earth[1]. A very silly movie, from the Turboman opening sequence on, and I honestly don’t know why we watch it. That’s traditions for you. I award Jingle All The Way an ill-conceived Terminator sequel out of a possible Terminator 2.

This is, of course, the quintessential Christmas story before you even get into the brilliant “why I don’t like Christmas” anecdote from Phoebe Cates’s character. I must have seen this as soon as it was released on VHS because I can’t imagine I was allowed to go and see it in the cinema in 1984. It had a lasting effect on my sense of what a monster story should be all about.

Gremlins was far more of a straight-up horror movie (than its sequel) in the vein of Critters, although it didn’t explicitly state that the Mogwai were alien[1] – there’s hardly anything else Gizmo’s species could be. In fact it was probably from another universe altogether, where metabolism and the laws of conservation of matter didn’t operate the same way. I suppose the Gremlins did eat a lot, so they might have been able to support their water-based reproductive systems … but even so, there was considerable incompatibility between the orders of life.

[1] Although I seem to recall the Gremlins book of the movie had more Gizmo (and Stripe) point-of-view sections that went into his state of mind and talked about the fact that they were from somewhere else. Or I may just have invented that memory.

Another fun one, an ’80s classic as well as a Christmas classic. Gremlins (and of course their cute fuzzy larval state) have always been one of my favourite creatures. I mean ten of them. Three hundred of them. Five hundred thousand of them. STAHP. 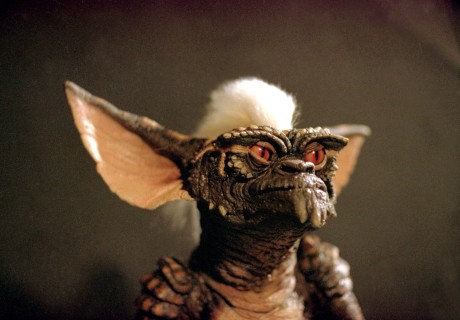 Good movie. A dousing in water, a solid feed after midnight, and a moderate-to-severe flashbulb trauma out of a possible Complete Kingston Falls Christmas Clusterfuck.

Because you can’t watch the first one without rocking straight into the sequel, we also put this one on. I’d remembered, in a vague sense, that this movie had the late great Christopher Lee in it, as well as Robert Picardo in it (and Robert Picardo’s late great hair!), because I had almost the entire set of Gremlins 2 trading cards when I was a kid. I still have them in my office somewhere. Gremlins was my baseball.

Gremlins 2 (The New Batch) was far more comedic and silly than the first movie. They just seemed to stop giving a shit about making a horror movie, and made it all about the Gremlins getting pulped and smashed and mutated into assorted dramatically un-scientific things because they injected themselves with stuff. 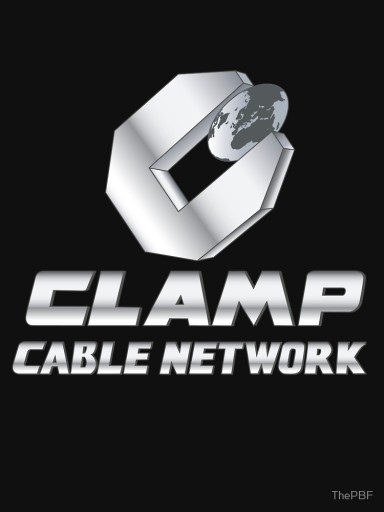 What was Clamp even into? I mean, aside from inspiring my Synfoss logo twenty-five years later, and being Donald Trump (that’s something I missed the first few dozen times around), he had a Christopher Lee lab in his building.

Hilarity ensued, a smart talking Gremlin was interviewed, the smart talking Gremlin injected another Gremlin with light-resistance serum but then failed to either inject more Gremlins or throw a pot of water over the resistant one, Robert Picardo absolutely gave in to the feminine wiles of Lady Gremlina and got probably-sort-of-raped at the end of the movie, and most of the audience’s questions about what exactly “feeding after midnight” meant were lampshaded, if not answered. I’m still not entirely clear on why snow and soup didn’t count as water, but paint-brush-rinsing water and a swimming pool did. Oh well.

The Gremlins franchise is a couple of my favourites and while I would hesitate to say they held up well, they’re the sorts of movies that were sort of made to not hold up. They didn’t hold up on the day of their cinematic release, so they had nowhere to fall to. It’s just a lot of people running around screaming with rubber Gremlin dolls pinned to their faces and arms, and Christopher Lee basically looking direct to camera and saying “a paycheck’s a paycheck.”

And there’s apparently a sequel still in the works: “…a script was written by Chris Columbus. His script explored the idea that has been on the fans’ minds for a long time: “if all the gremlins come from getting Gizmo wet and feeding his mogwai offspring after midnight, should Gizmo be eliminated?” He described his script as “twisted and dark”.  Holy shit no kidding.

This ties nicely into my idea that a third movie would basically have to have Gizmo himself going Gremlin in order to defeat the other Gremlins … I would love to see a first-generation Mogwai transform. But there would be no going back and Gizmo would have to die. Or go home.

Also Clamp would be President.

I’m not often driven to introspection or reflection, but the question does come up sometimes. The big question. So big, there’s just no containing it within the puny boundaries of a single set of punctuationary bookends. Who are these mysterious and unsung heroes of obscurity and shadow? What is their origin story? Do they have a prequel trilogy? What are their secret identities? What are their public identities, for that matter? What are their powers? Their abilities? Their haunted pasts and troubled futures? Their modus operandi? Where do they live anyway, and when? What do they do for a living? Do they really have these fantastical adventures, or is it a dazzlingly intellectual and overwrought metaphor? Or is it perhaps a smug and post-modern sort of metaphor? Is it a plain stupid metaphor, hedged around with thick wads of plausible deniability, a soap bubble of illusory plot dependent upon readers who don’t dare question it for fear of looking foolish? A flight of fancy, having dozed off in front of the television during an episode of something suitably spaceship-oriented? Do they have a quest, a handler, a mission statement, a department-level development objective in five stages? I am Hatboy. https://hatboy.blog/2013/12/17/metalude-who-are-creepy-and-hatboy/
View all posts by Hatboy →
This entry was posted in Hatboy's Movie Extravaganza and tagged Bar Äijä's, christmas, christmas movies, film reviews, gremlins, gremlins 2, movie reviews, movies. Bookmark the permalink.