Note: I will not be spoilertexting this review. If you don’t want to know what happens in this movie, then don’t read this post.

I should probably have listened to my man Mr. Bloom about this one, but I had nothing better to do while writing and drawing Christmas cards on Thursday night, and I saw that Geostorm had appeared on my Netflix list. So, deciding that I would quit and go to bed if I got even slightly sleepy, I decided to give this a roll. 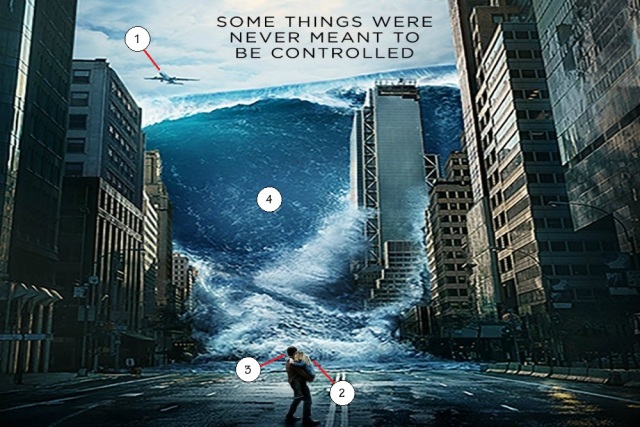 In the picture above, (1) represents the people who have so far escaped watching Geostorm; (2) represents me; (3) represents my lifelong love of CGI disaster spectaculars, which has carried me into this shitty situation and is now trying in vain to shelter me; and (4) is The Suck.

Maybe the best way I can complain about this movie is by starting with the tagline in the poster above. It seems to be suggesting that it’s referring to our hubris in attempting to control the weather – weather that ultimately built up and broke free of our control, Jurassic Park franchise-style, and brought disaster down on our heads.

But no. Actually, the Dutch Boy satellite network and the whole human weather control concept would have worked perfectly, if it hadn’t been for a bunch of stupid psychotic cunts (or possibly even single cunt) who decided to use the system to destroy ninety percent of the world[1] before they were forced to hand it over to enlightened international oversight[2]. The whole thing worked exactly as goddamn advertised and at the end of the movie they were rebuilding the fucking thing so no, that’s not what was happening in the movie. Maybe the tagline is referring to the US’s foreign policy. That actually makes a lot more sense.

[1] I believe the actual phrase was “all of our enemies”, but this phrase was spoken by a USian military representative so I guess I’m rounding down.

[2] Actually I may be misrepresenting how Jurassic Park went bad too. Would everything have been basically fine in the original movie if Nedry hadn’t sabotaged the park for reasons of greed? I think it would. I think the storm wouldn’t have been a problem, although it was a doozy of a storm. I don’t remember how the rest of the movies went bad but let’s just say it was all because their plots were spliced together with Michael Crichton DNA.

What an irretrievably shambolic movie this was. Not even the disaster effects were enough to save it, mostly because they were pretty lame by this decade’s standards. I’m pretty sure we know by now that skyscrapers don’t fall down like dominoes. Japan doesn’t need to be hammered with giant hail every time. Some of it was fun to see but there was nothing new and most of it just sucked.

How can you go wrong with a plot involving a huge machine that can protect the Earth from climate-change-induced extreme weather? Here’s a synopsis idea just off the top of my head after thinking about it for literally three minutes:

Little girl narrator voice: “Earth’s weather was killing us. It was too late to reverse the damage we’d done by cleaning up our emissions, so we did something more extreme, just to give ourselves the time we needed.

“We built this huge stupid satellite system, and we even called it Dutch Boy because we were acknowledging that it was a temporary solution at best.

“Then we did what we always do with extinction-level shit, which is dust off our hands and declare the crisis over because the weather improved. We didn’t take any further steps because there was no money in it.

“But – as per the entirely accurate tagline of this movie – some things were never meant to be controlled. Dutch Boy was a stopgap solution.”

Plot points quickly make it obvious that behind the immediate ameliorating effects of the satellite system, the planet’s climate – a system simply too vast for us to do anything about – is still getting worse. Every time we smother a tidal wave or Sharnado a hurricane, the underlying forces are still building up.

Jake Lawson, the designer of Dutch Boy, knows this but finally got tired of trying to tell everyone about it, and – because he was absolutely fucking world famous and wealthy beyond his wildest dreams after saving the world – descended into absolute decadence because he saw extinction approaching. He’s lost his family because he is a shitty cynical drunk who thinks we deserve to die (and isn’t actually wrong). Also, we don’t need to have any of those scenes where people don’t know who he is, because those were fucking retarded even in the retarded version of the movie that actually got made.

The subsystems of Dutch Boy finally begin to give way, one at a time causing the escalating and cycling series of mega-disasters we love so much. The Statue of Liberty is blasted into the stratosphere by a megacyclone and it lands on the Golden Gate Bridge, automatically making my version of the movie a billion percent better than the original.

Lawson hatches a desperate plan to fix things, and relates it to the “little Dutch boy” story in some way – either by adding more fingers, or fixing the dike, or lowering the water level to underneath the crack, or some other metaphorical Star Trekesque simplification. Maybe they added nukes to turn Dutch Boy into Dutch Man. Or Dutch from Predator. I don’t know. Something, anyway.

Lawson, having fixed things back to the level they were at in the beginning of the movie, and possibly undergoing some sort of character development that makes him think that maybe we don’t deserve to go extinct (you could link it to his kid and hope for the future, if you want to be really sappy and clichéd about it and I know you do), then realises that there was some sort of long-term plan to reverse climate change but that a group of oligarchs keep torpedoing it because it makes them wealthier in the short term to have the world under threat of disaster. Or something like that but not quite so “Shield Corporation”, I could come up with something if you gave me another three minutes.

The chief oligarch tells Lawson “this is America” and Lawson yells “THIS IS EEEAAARTH!” and uses Dutch Boy to pound the oligarchs’ secure bunker to frozen slag using every natural disaster available in the Dutch Boy climate buffers or whatever, providing a nice book-end to the idea that there are some things we were never meant to control, in this case the rich not being able to protect themselves from the planet’s fury by using money.

Gerard Butler would probably refuse to do the line but we could give it to Zazie Beetz instead since I’m 96% sure there was a line she had that Reynolds used in Deadpool 2 so the fourth wall is already gone. Damn it I can’t remember what the line was now but it was just about the only highlight of this facebound turd of a movie. I award it with a two, out of a possible … anything, really. But more than eight, whatever it is.

Ugh, I’m done. Fucking call me, Hollywood. You need me.

I’m not often driven to introspection or reflection, but the question does come up sometimes. The big question. So big, there’s just no containing it within the puny boundaries of a single set of punctuationary bookends. Who are these mysterious and unsung heroes of obscurity and shadow? What is their origin story? Do they have a prequel trilogy? What are their secret identities? What are their public identities, for that matter? What are their powers? Their abilities? Their haunted pasts and troubled futures? Their modus operandi? Where do they live anyway, and when? What do they do for a living? Do they really have these fantastical adventures, or is it a dazzlingly intellectual and overwrought metaphor? Or is it perhaps a smug and post-modern sort of metaphor? Is it a plain stupid metaphor, hedged around with thick wads of plausible deniability, a soap bubble of illusory plot dependent upon readers who don’t dare question it for fear of looking foolish? A flight of fancy, having dozed off in front of the television during an episode of something suitably spaceship-oriented? Do they have a quest, a handler, a mission statement, a department-level development objective in five stages? I am Hatboy. https://hatboy.blog/2013/12/17/metalude-who-are-creepy-and-hatboy/
View all posts by Hatboy →
This entry was posted in Hatboy's Movie Extravaganza and tagged bad movies, BSTs, cgi, disaster movies, film reviews, films, movie reviews, movies. Bookmark the permalink.

5 Responses to Geostorm (a review)