I was saddened yesterday to learn that the legendary Stan Lee, grand-daddy of Marvel comics, had died aged 95.

That’s one Hell of an innings, especially considering he was still pulling hilarious cameos in his Marvel movie franchises right up to the last. And doing a pretty damn good job at it even if his acting was famously bad. 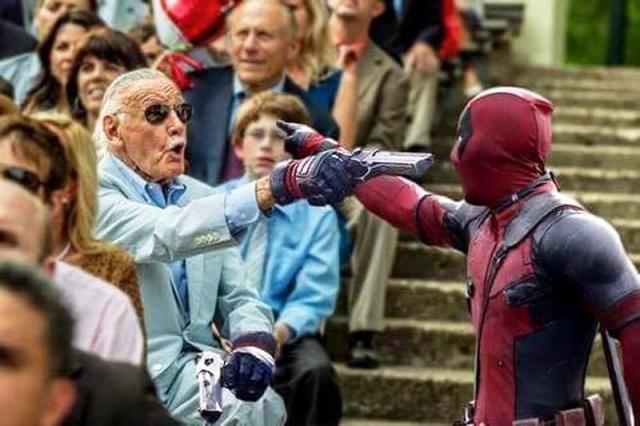 Because let’s face it. If you’d helped create all these characters[1], you’d go in their movies too.
[1] My understanding is that he was a rubber stamp at best on Deadpool, but it still counts.

We can sit here all day and reminisce, listing his achievements and creations. His was a creative artistic force the like of which we will not soon see again. The Internet will, I imagine, be full of tributes over the next few days and I’m not going to compete with that, but I’m happy to jump on the bandwagon. I’m not really that kind of comic book nerd – most of my experience has been with the movies – but my respect and admiration cannot be overstated.

So long, Mr. Lee. And thank you for all the wonderful fun.

– Posted from my Huawei dduring lunch.

I’m not often driven to introspection or reflection, but the question does come up sometimes. The big question. So big, there’s just no containing it within the puny boundaries of a single set of punctuationary bookends. Who are these mysterious and unsung heroes of obscurity and shadow? What is their origin story? Do they have a prequel trilogy? What are their secret identities? What are their public identities, for that matter? What are their powers? Their abilities? Their haunted pasts and troubled futures? Their modus operandi? Where do they live anyway, and when? What do they do for a living? Do they really have these fantastical adventures, or is it a dazzlingly intellectual and overwrought metaphor? Or is it perhaps a smug and post-modern sort of metaphor? Is it a plain stupid metaphor, hedged around with thick wads of plausible deniability, a soap bubble of illusory plot dependent upon readers who don’t dare question it for fear of looking foolish? A flight of fancy, having dozed off in front of the television during an episode of something suitably spaceship-oriented? Do they have a quest, a handler, a mission statement, a department-level development objective in five stages? I am Hatboy. https://hatboy.blog/2013/12/17/metalude-who-are-creepy-and-hatboy/
View all posts by Hatboy →
This entry was posted in Hatboy's Movie Extravaganza and tagged comic book movies, Comics, excelsior, magnificent nerds, Marvel, obituaries, RIP, Stan Lee. Bookmark the permalink.

1 Response to Hulk Out