Quick one today, since I’m between stories. The US had their mid-term elections last week, which a lot of people have been looking forward to since Trump was put into office in defiance of the actual number of citizens who voted for him, because the US’s democratic system is broken.

Ever since that stupid day two years ago, my understanding of USian (and by extension, world) politics has been this:

So that’s about it. The mid-term elections were meant to be a “blue wave” of liberal and progressive voters coming out and taking back power from the increasingly fascist right-wing government. 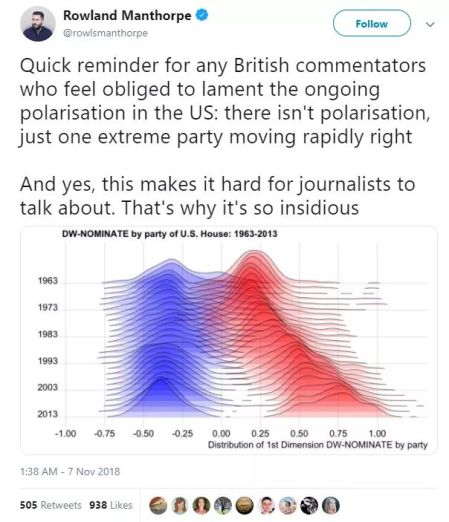 And before anyone tries to tell me this is unbalanced and the left is just as much to blame for the widening gulf and there is cause for concern in these radical progressives and “antifas”, don’t. Just fucking don’t. You’re wrong.

So, how did that all go?

I have no idea. Here’s one of the better summaries I could find, and it’s very much a “meh, this was fine, I guess, but more of you chuckleheads still need to goddamn vote” mixed bag.

Blue wave, it was not.

Let’s hope things turn around soon, because the longer this anti-immigrant bigotry and foreigner-phobic shit is allowed to fly in the US, the more emboldened the racist and the ignorant will become across the globe. And frankly I think those pieces of human garbage need to be put back in their dumpsters for a few years.

Trying to have a civilisation here, you thick-headed fucks.

– Posted from my Huawei mobile phone while picking up Toop from daycare.

I’m not often driven to introspection or reflection, but the question does come up sometimes. The big question. So big, there’s just no containing it within the puny boundaries of a single set of punctuationary bookends. Who are these mysterious and unsung heroes of obscurity and shadow? What is their origin story? Do they have a prequel trilogy? What are their secret identities? What are their public identities, for that matter? What are their powers? Their abilities? Their haunted pasts and troubled futures? Their modus operandi? Where do they live anyway, and when? What do they do for a living? Do they really have these fantastical adventures, or is it a dazzlingly intellectual and overwrought metaphor? Or is it perhaps a smug and post-modern sort of metaphor? Is it a plain stupid metaphor, hedged around with thick wads of plausible deniability, a soap bubble of illusory plot dependent upon readers who don’t dare question it for fear of looking foolish? A flight of fancy, having dozed off in front of the television during an episode of something suitably spaceship-oriented? Do they have a quest, a handler, a mission statement, a department-level development objective in five stages? I am Hatboy. https://hatboy.blog/2013/12/17/metalude-who-are-creepy-and-hatboy/
View all posts by Hatboy →
This entry was posted in Hatboy's Nuggets of Crispy-Fried Wisdom and tagged elections, humanity deserves whatever it gets, left wing, politics, right wing, US politics. Bookmark the permalink.

3 Responses to Okay, politics then