It was a productive weekend and now my girls are all home and all is well with the world. Confession time.

I went to see Solo: A Star Wars Story last Thursday, just because I could. I went alone, antisocial and selfish. I’d love to say I did it because I didn’t think some friends would be interested, or others were busy, or others still had seen the movie already. I’d even settle for “Solo is right there in the name of the movie.”

But none of those things. I just wanted to go to a movie all by myself, and then spend the rest of the weekend all by myself. It’s a rare occurrence.

So anyway, I was alone in the cinema.

Except for like one other guy, and I think I made him uncomfortable by reaching for my popcorn and accidentally fondling him, also I had no popcorn. Either way, he didn’t play the cinema game. In any sense of the term.

And so I played the pre-movie interactive game on my mobile, and I won. So now I have 2 free months of HBO Nordic to enjoy. This confession is partly because how else was I going to review the movie, and partly because trying to come up with some convoluted and devious way of explaining why we suddenly have HBO Nordic, when nobody would actually care that I went to see a movie, is 90s-USian-sitcom levels of stupid.

That’s as good a segue as ever into what I thought of this movie.

No … that’s cruel, and not true – it was just too perfect an opportunity to pass up. The movie was actually pretty fun. I had a few chuckles, and the overall nature of the plot and story was fun to watch – like a pleasant mixture of origin story, prequel, heist movie, and gangster movie, in a sci-fi setting. It was fine.

Here’s a little prediction for you: When Cinemasins does their “Everything Wrong With Solo” video (those are increasingly dubious and dumb, but still amusing sometimes – and it’s the post-credits stuff I’m referring to now[1]), they will dub over the Crimson Dawn showdown scene with those lines from Indiana Jones and the Last Crusade: “Because he didn’t take my advice. Didn’t I say trust no-one?”

[1] Cinemasins takes clips from the movie they’ve just critiqued, and plays sound from classic movies over the top to illustrate the similarity in the scene or event. Go and check it out, you’ll see what I mean. Their critiques are dumb though.

Because yes, there was a lot of double-crossing, triple-crossing, motive-switching, and other staples of the heist / intrigue genre. And okay, they weren’t particularly well done – but how well-done do they need to be, in a Star Wars movie? They were solid Ocean’s n -grade tropes, and the overall heist and the sense of character investment and everything was pretty solid. I really liked the crime boss and the gritty subterranean / perpetual dark dwelling elements of Han’s childhood. It reminded me (not to overstate the derivative nature, but when you paint by numbers you end up seeing a lot of number two[2]) of the flashbacks in the Gentlemen Bastards series. Which is great. I could have seen a lot more of Han clawing his way out of essential slavery under the shadow of the Empire’s war machine, without worrying too much about the rest. But the rest was also fine.

I liked these little touches. Which is more than can be said for my cinema-buddy.

[2] I just made that up but I feel it works on several levels. Quite chuffed with myself actually.

Some of it clanged. Little things, like I was fine with “Han Solo” just being his name, making that “solo = alone” connection seemed like lampshading and called too much attention to the language somehow. I don’t know. And nobody needed to know that “Chewbacca” was too difficult to say and so “Chewie” is a simplification. We all knew that. Just little things.

Han’s struggle between being a nice guy / hero / scoundrel / gangster was laid on way too thick. We could have seen that shit happening in his actions and in his character, and knowing where he was going to end up. And his critical aid in starting the Rebellion was just – no. I don’t care if he did that, but he would definitely mention it the next time he was roped into helping them. And they probably would have known the name “Han Solo” in connection to those hyperfuel[3] supplies that helped them get started.

[3] Alright, hyperfuel is dumb too. Necessary, probably – but dumb.

But I liked the explanation for the Kessel Run being a distance instead of a time, and I enjoyed that whole part of it.

I also enjoyed the SPACE SQUID FOR NO REASON. No, for real, I loved it.

I also liked the Han and Chewbacca meeting, although of course it could still have been done differently. I got a good feel for their characters and their friendship, although with Han being off-screen part of the Imperial Navy or whatever, surely there could have been better opportunities for him to defect with a Wookiee slave? Oh well. 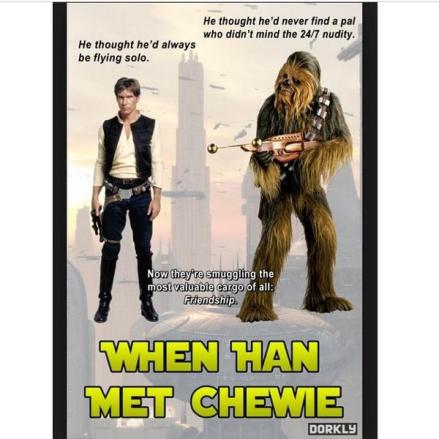 Hee hee, thank you Dorkly, for not letting me down.

Oh, and I liked Lando a lot (his interaction with Han was spot on and I would have loved to see more of it, hopefully in future movies), and I loved L3. I’ve seen some comments to the effect that L3 was a lead-balloon feminist / SJW parody, and therefore annoying to the anti-SJW crowd as well as to the SJW crowd themselves? I don’t care, she was gloriously fun. I was left wondering a) how Lando ever made the mistake of betting her in a game of sabacc once she was integrated into the Falcon, and b) how in the name of Darth Maul’s shiny robot legs there aren’t more droid uprisings if the whole teetering edifice of Galaxy Far Far Away socioeconomics is pinned in place by droid retraining bolts. But she was great. Almost as good as K2-SO, and raises a whole different set of questions.

Now, my apologies for another questionable segue, but what was the deal with Darth Maul?

I get it, he’s a bigger deal in the Rebels TV series and other quasi-canon, and they’re apparently fitting him into the story between Episode III and Episode IV. That’s fine, that’s cool, he was a neat character and very under-used in Episode I. Dare I say, he lived up to less than half of his potential? I dare.

But anyway, his appearance in this movie just seemed … weird. Forced[4], like a cameo in a DC crossover episode. I’m not complaining, necessarily, and again I’m hoping that we’ll see more of this storyline in up-coming movies. You know, unless the next movie’s director just cuts Maul in half[5] and says “none of that matters, and P.S. Note: Poochie died on the way back to his home planet.” That’s a possibility.

But on the whole, I enjoyed this Star Wars movie about as much as I’ve enjoyed any other. In case you haven’t realised it by now, I’m not super-invested in Star Wars and honestly can’t be bothered ranking them anymore. I think it makes me a happier person to just not care quite so much about shit, especially when it’s shit that the Internet fucking loves caring about.

Suck it up, nerds.

Fun movie. Let’s give it seven hundred and thirty-five years out of a possible complete and satisfactory Sarlacc digestion. Mild Sarlacc reflux warning, but nothing a good night’s Sarlacc rest won’t fix.

– Posted from my Huawei mobile phone while sitting in the carpark after work.

1 Response to Solo (a review)