To cheer Wump up after her sad day yesterday (that is to say, Monday the 8th of January, 2018 since I am still writing this damn travelogue), we headed into Fremantle to take a swing at the Fairy Shop[1]. A first swing, as it turned out, because as Boromir might have said, one does not simply go to the Fairy Shop for just one forty-five-minute shopping spree.

[1] Actual name The Pickled Fairy and Other Myths – some might recognise this shop, and its neighbour Ark of Joan as the inspiration for Karma Fairies (Crystals, Aromatherapy, Tarot, +acupuncture) in Bad Cow. What, you didn’t think I actually made all that shit up, did you? 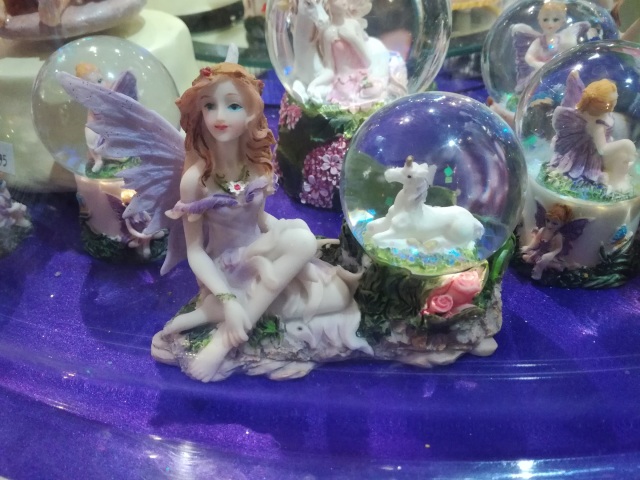 Wump asked me to take a picture of this, just in case something cooler didn’t show up in the meantime so her grandmother could buy it for her for her birthday. I was going to take a photo of it anyway, just in case anybody ever tried to convince me that “girly” wasn’t a thing.

We also went for a visit to the Maritime Museum, which had a very cool exhibit on the naval evacuation of Pompeii. This was also an excellent opportunity for Wump and Toop to get into adorable Roman costumes.

I’m not often driven to introspection or reflection, but the question does come up sometimes. The big question. So big, there’s just no containing it within the puny boundaries of a single set of punctuationary bookends. Who are these mysterious and unsung heroes of obscurity and shadow? What is their origin story? Do they have a prequel trilogy? What are their secret identities? What are their public identities, for that matter? What are their powers? Their abilities? Their haunted pasts and troubled futures? Their modus operandi? Where do they live anyway, and when? What do they do for a living? Do they really have these fantastical adventures, or is it a dazzlingly intellectual and overwrought metaphor? Or is it perhaps a smug and post-modern sort of metaphor? Is it a plain stupid metaphor, hedged around with thick wads of plausible deniability, a soap bubble of illusory plot dependent upon readers who don’t dare question it for fear of looking foolish? A flight of fancy, having dozed off in front of the television during an episode of something suitably spaceship-oriented? Do they have a quest, a handler, a mission statement, a department-level development objective in five stages? I am Hatboy. https://hatboy.blog/2013/12/17/metalude-who-are-creepy-and-hatboy/
View all posts by Hatboy →
This entry was posted in The Chucky Report and tagged ark of joan, Bad Cow, Fremantle, Oræl Rides To War, pickled fairy, travelog, travelogue, Wump and Toop. Bookmark the permalink.