We went to my aunt and uncle’s place on our 16th day of summer holidays. This was enjoyable, because – well for a start they’re good people. And they also had a swimming pool, so Wump could finally try again with the snorkel without getting salt water in her mouth.

She was still a bit hesitant and didn’t really get much snorkelling done, because she still had loose teeth to contend with and there wasn’t particularly much to see in the pool and the goggles were a bit oversized so they leaked. But it was fun.

The pool was also solar heated, which meant it wasn’t particularly refreshing on a hot summer day … but it was slightly cooler than the outside air and it was nice to have a splash.

We hung out there for a while, and then Wump had a sad little meltdown towards the end of the visit because my sister and nieces were headed back to Margaret River and she wouldn’t get to play with them anymore. So that was all a bit tragic.

We went home and just generally tried to get on with our lives. 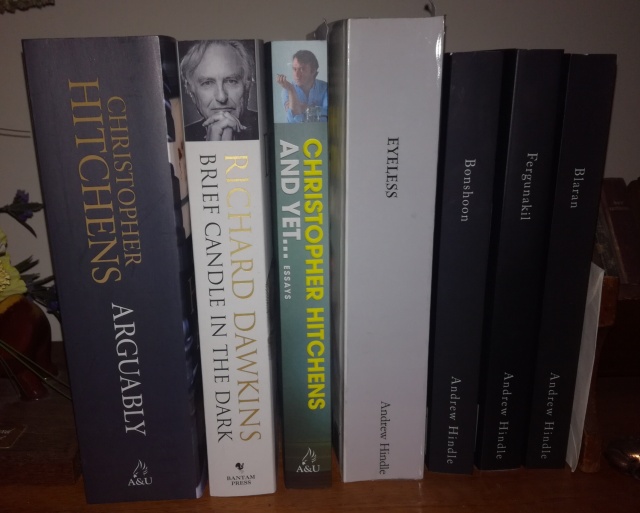 I was delighted, that evening, to see that my dad’s bookshelf had diversified a little in the past couple of years. His collection’s a bit sparse, and I’m not sure how the Shrill Antitheist Twins would feel about sharing shelf-space with me … but funny anyway.

I’m not often driven to introspection or reflection, but the question does come up sometimes. The big question. So big, there’s just no containing it within the puny boundaries of a single set of punctuationary bookends. Who are these mysterious and unsung heroes of obscurity and shadow? What is their origin story? Do they have a prequel trilogy? What are their secret identities? What are their public identities, for that matter? What are their powers? Their abilities? Their haunted pasts and troubled futures? Their modus operandi? Where do they live anyway, and when? What do they do for a living? Do they really have these fantastical adventures, or is it a dazzlingly intellectual and overwrought metaphor? Or is it perhaps a smug and post-modern sort of metaphor? Is it a plain stupid metaphor, hedged around with thick wads of plausible deniability, a soap bubble of illusory plot dependent upon readers who don’t dare question it for fear of looking foolish? A flight of fancy, having dozed off in front of the television during an episode of something suitably spaceship-oriented? Do they have a quest, a handler, a mission statement, a department-level development objective in five stages? I am Hatboy. https://hatboy.blog/2013/12/17/metalude-who-are-creepy-and-hatboy/
View all posts by Hatboy →
This entry was posted in Astro Tramp 400, The Book of Pinian, The Chucky Report and tagged books, Dawkins, hitchens, the book of pinian, the final fall of man, travelog, travelogue. Bookmark the permalink.