Ah, the long-awaited trip to Excape.

No, that’s not a typo. It bugged the shit out of me. It’s a fun jokey cool name, see. It’s meant to be that way. And no, they didn’t serve expressos there, although they totally should have. I need to send them a suggestion e-mail.

What the Hell am I talking about? Oh, our little jaunt to the Excape on the Cape (see, the name was because the park was built on Cape Naturaliste, see, it’s intentional) fun park, which I can’t even find online because first of all, Google assumes I meant Escape, and second of all, it’s Excape on the Cape so why would it need a goddamn website.

Nah, look, it was alright. The girls had been looking forward to it for days, and it was sunny and warm and the park had a water slide section. In fact, that’s where it all got a bit sad. Because the water wasn’t heated.

I guess what I noticed most this time around, now the girls are a bit older, is just how much my childhood revolved around pools and the ocean. We swam a lot. It was a big part of physical education at school. It was basically all of our recreation in summer. Swimming, surfing (just bodysurfing and boogie boarding for me, I wasn’t a stander), snorkelling, water parks, all that. Outdoor water parks.

And yeah, the water is basically always cold. Because when it’s 30ºC, you don’t want to swim in a heated pool.

Toop wasn’t having it. There were no pools at Excape as such, which was actually a neat way of doing it because there was a reduced risk of drowning and subsequent need for supervision, but there was water spraying everywhere. The slide complex was like a huge yard sprinkler, with enormous buckets filling up and pouring all over the place, and the only way up onto the slides was up some stairs with water spraying over them. It would have been a lot of fun if the girls were used to that sort of thing, but obviously you can’t pass down an entire upbringing the way you can pass down … you know, bowel cancer.

Toop got a face-full of cold water and immediately dissolved into tears and demanded to be taken away from the horrible cold spraying thing, and that was sad because the only way down was either a cold waterslide or another run down the sprinkler-steps. All in all, a dramatic failure.

Wump at least gave it a shot, although after going down a couple of the slides she decided she wanted lunch. And that means, for the uninitiated, that she totally wasn’t into it. Because if she was, I would have had to drag her out of there and she would have denied being hungry until her dying breath. But no, she volunteered to go, and she didn’t go back in. Fortunately there was a maze, and mini-golf, and a couple of other things at the same park, so we did all that.

All in all, for a place we could effortlessly have spent 8 hours in back in Finland, we were there about 2. And I have to admit I’m glad my mum paid for it, because I would have been pissed at paying the ticket prices Excape demanded, for us to only be there 2 hours. But okay. Wump did enjoy herself, and she kept the admission bracelet on her wrist for the rest of the trip. She’d been disappointed at the Animal Farm a couple of days earlier, when the admission bracelet had come off.

From Excape, we decided to swing past Dunsborough since we were closer to Dunsborough than Margaret River (and we’d only used up about 2 hours of the day, as mentioned). Now, Dunsborough is the little town where we had our beach house when I was a kid. It was a great little place right next to the beach, a short walk or even shorter bike ride to the corner shop, all that idyllic crap. It’s always amusing to relate the story of how my grandfather bought the place for $6000 and was told he was wasting his money. He left it to my father and auntie when he died, and then sometime in the late ’90s my dad bought out his sister’s half of the property for $300,000 (or half its estimated market value). I don’t know how much he ultimately sold the block for when they moved, but it was obviously enough to buy their Margaret River holiday mansion with approximately a shit-ton of cash left over.

Anyway, we went back to the old block and there is now a palace built on the property, which was pretty appalling to see … but then Dunsborough itself is a little city now so that’s progress for you. We went across the road to the beach, which is actually ankle-deep for the first hundred metres or so, so it was very warm and the girls finally had a bit of fun in water that was the proper temperature.

You could stand on the beach and look out at the ocean, and that was more or less as I remember it being. A few more boats, and a lot less wildlife, but I guess that’s progress for you, too.

At least there were none of these vicious (but delicious!) bastards under the sand anymore.

Ooh, or these fuckers. Funny point of interest, I had no idea this “stinger” was called a jimble. Apparently related to the box jellyfish but (as I can testify, having been stung innumerable times as a kid) merely painful rather than deadly. It’s mildly amusing because one of the (as-yet not canonically published) Elder Races in my Book of Pinian urverse are called Jimbles. Huh.

Still, that was Dunsborough.

That night we (Mrs. Hatboy and myself, Wump and Toop, my parents, my nieces, my brother and sister, and sister’s boyfriend Yuri and Yuri’s sister) all went out for Indian. 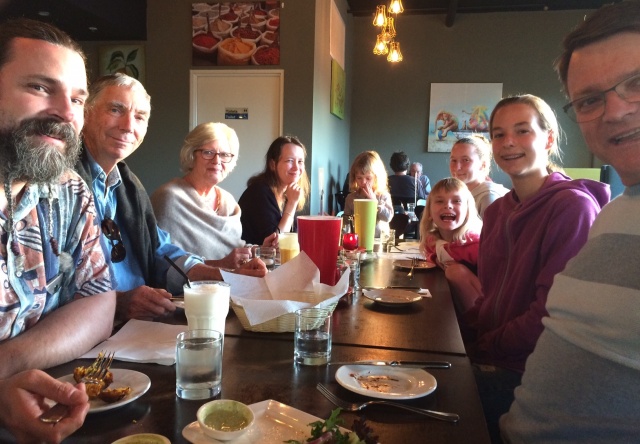 Not all of us made it into this photo.

Dinner was grand and Wump and Toop ate a truly heroic quantity of butter chicken. My parents were stunned by how much they ate. It was almost as if they had never seen children eating of their own free will without aggressive interference before.

Anyway, this little plot point becomes important later in the story, so I’m just mentioning it in passing now. Because that’s how I roll.

Speaking of roll, after gorging ourselves on Indian it was time to roll home and collapse into bed.

I’m not often driven to introspection or reflection, but the question does come up sometimes. The big question. So big, there’s just no containing it within the puny boundaries of a single set of punctuationary bookends. Who are these mysterious and unsung heroes of obscurity and shadow? What is their origin story? Do they have a prequel trilogy? What are their secret identities? What are their public identities, for that matter? What are their powers? Their abilities? Their haunted pasts and troubled futures? Their modus operandi? Where do they live anyway, and when? What do they do for a living? Do they really have these fantastical adventures, or is it a dazzlingly intellectual and overwrought metaphor? Or is it perhaps a smug and post-modern sort of metaphor? Is it a plain stupid metaphor, hedged around with thick wads of plausible deniability, a soap bubble of illusory plot dependent upon readers who don’t dare question it for fear of looking foolish? A flight of fancy, having dozed off in front of the television during an episode of something suitably spaceship-oriented? Do they have a quest, a handler, a mission statement, a department-level development objective in five stages? I am Hatboy. https://hatboy.blog/2013/12/17/metalude-who-are-creepy-and-hatboy/
View all posts by Hatboy →
This entry was posted in The Chucky Report and tagged dunsborough, excape, indian food, travelog, travelogue, true facts. Bookmark the permalink.