Told you there’d be interludes.

Anyway, Mrs. Hatboy and I finally got around to watching Bright, since it came out on the day we departed for the Land of Bad Internet.

For anyone unaware, Bright is a “Netflix Original” buddy cop movie starring Will Smith. The catch is, this is Los Angeles in a world of “nine races”, a sort of high fantasy world of orcs, elves, dragons, centaurs, wizards and fairies, projected forward into the present day. Smith plays a grumpy cop version of himself, and Joel Edgerton plays his orc partner – a “diversity hire” from a downtrodden and generally disliked race that sided with “the Dark Lord” 2,000 years ago and has basically been the bad guys ever since. 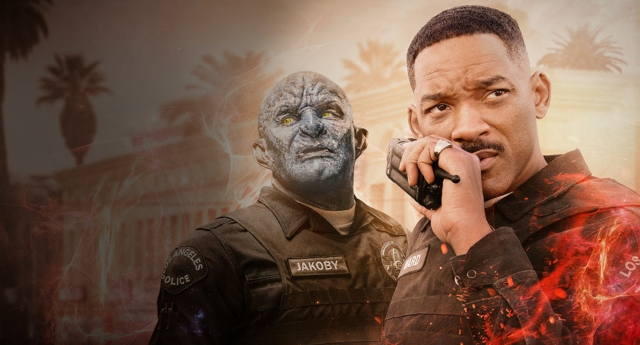 With a brilliant cast and an exciting new premise[1], it’s fair to say I was excited about this movie from the moment I first heard about it. I enjoy Will Smith movies regardless of their actual content or quality, and Bright promised a lot in both of these categories.

[1] Okay, it’s basically an exact copy of Alien Nation, only high fantasy instead of science fiction, and a “been that way all along” premise rather than a “this is a new development we’re all adjusting to” premise. But that’s not a bad thing.

Well, needless to say I loved it. I sat wide-eyed and grinning like a little kid and even though there were absolutely no surprises at any point along the way, I was impressed at every turn. Like The Expanse, the stuff going on under the surface of this movie told me there was a whole world to explore in related series and movies, even if they can’t gather this cast again. I love what Netflix is doing.

I won’t go too far into the details of the movie. I just thought it was spot on. Obviously there was an awful lot of very heavy-handed class warfare stuff going on, but that was also fun to see. The elves were the wealthy, callous socialites and the shallow, pretty parasites, the one percent, the string-pullers. Exactly as it would be in a high fantasy world projected into the modern era. The orcs were the powerful but divided downtrodden minority groups, and the humans were the aggressive, prejudiced, harried normals in the middle. 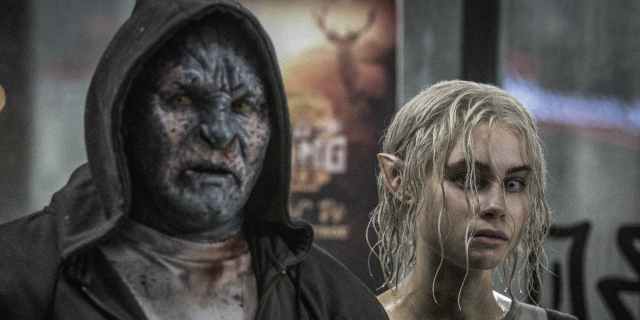 Like Valerian, I would happily have watched a six-hour documentary about the different races and their characteristics and history.

There was a lot going on behind the scenes in this movie and I’m glad they only touched on most of it. It left room for further developments in this world, and a sense of a larger story, but it didn’t over-crowd this simple cop drama. If they could Lethal Weapon this universe, I would be beyond delighted. 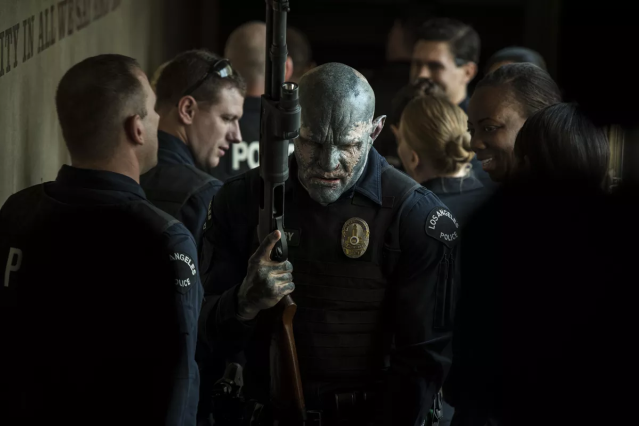 If Will Smith could say he’s getting too old for this shit, and Jakoby could say something about orcs living to the age of 400, that would just be a bonus.

The sub-plot (trying to avoid spoilers here) of the shooting of Smith’s character[2], the orc kid who got away and later turned up, might actually have been a little surplus to requirements – especially since it didn’t really provide a real plot point or escape hatch. The kid was pushed aside and the shit still went down. Maybe it could have told a more powerful story if they’d been allowed to live as a result of Jakoby’s act, and then some other group had escalated matters, showing Smith’s character that orcs weren’t all evil after all. Or maybe that would have been to cheesy (*too cheesy; but left out of respect for Mr. BRKN finally spotting a spelling error –Ed). I did like that the story concluded with a few prejudices still intact.

[2] This happens in the first 30 seconds of the movie so not really a spoiler, you know a buddy cop movie’s grumpy-cop character has to have a haunted past.

All in all, a lovely movie that I enjoyed greatly. I may be an exceptionally targeted and uncritical audience member, but Netflix is going from strength to strength and I can’t wait to see what happens next. I want to give this one a Bad Boys 2 out of a possible Bad Boys.

I’m not often driven to introspection or reflection, but the question does come up sometimes. The big question. So big, there’s just no containing it within the puny boundaries of a single set of punctuationary bookends. Who are these mysterious and unsung heroes of obscurity and shadow? What is their origin story? Do they have a prequel trilogy? What are their secret identities? What are their public identities, for that matter? What are their powers? Their abilities? Their haunted pasts and troubled futures? Their modus operandi? Where do they live anyway, and when? What do they do for a living? Do they really have these fantastical adventures, or is it a dazzlingly intellectual and overwrought metaphor? Or is it perhaps a smug and post-modern sort of metaphor? Is it a plain stupid metaphor, hedged around with thick wads of plausible deniability, a soap bubble of illusory plot dependent upon readers who don’t dare question it for fear of looking foolish? A flight of fancy, having dozed off in front of the television during an episode of something suitably spaceship-oriented? Do they have a quest, a handler, a mission statement, a department-level development objective in five stages? I am Hatboy. https://hatboy.blog/2013/12/17/metalude-who-are-creepy-and-hatboy/
View all posts by Hatboy →
This entry was posted in Hatboy's Movie Extravaganza and tagged bright, high fantasy, movie reviews, movies, netflix. Bookmark the permalink.

20 Responses to Interlude: Bright (a review)