A thought on immigration and the changing world

A recent re-flourishing of an older blog post I made has created some interesting discussion, even if I consider it a little fruitless. Exchanging ideas and getting a look at things from other perspectives can be good. Check it out, if somehow you’ve managed to miss it and for some inexpressible reason you feel like delving into immigration / refugee / Middle Eastern foreign policy debate yet again.

Now, I intend to leave all that debate over there where it belongs, but one of the issues made me think about something.

And that issue was this: Developed or otherwise stable nations do not have an obligation (beyond a moral one, or one outlined in international treaty) to take in refugees or indeed any other immigrants.

Okay, so this is endlessly debatable depending on what angle you look at it from. However, in the US’s case it made me think about the words on the base of the Statue of Liberty[1]. I know, I know, a tired old argument but hear me out. 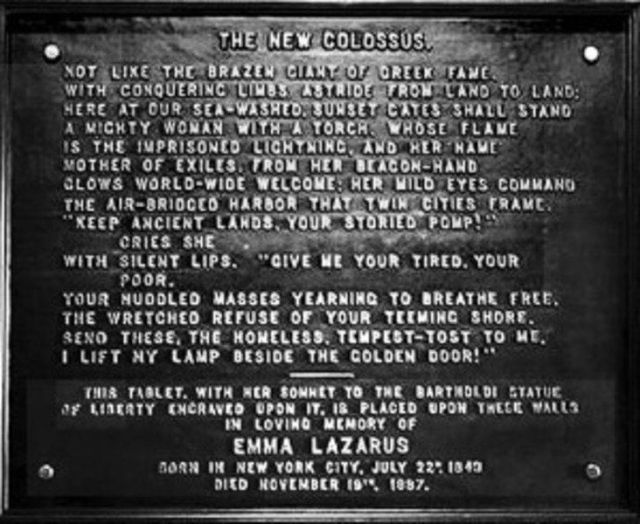 [1] Interestingly, since I hadn’t really read up on this, here’s some factoids: The inscription is a sonnet by Emma Lazarus, The New Colossus. Up until 1986, it was mounted inside the statue’s pedestal, but now it sits in the Statue of Liberty Museum in the base of the statue. I always had the idea that it was written in three-foot-high letters on the statue’s base – this, incidentally, despite the fact that I’ve been to the Statue of Liberty. I didn’t see the plaque. Sorry.

So, we all know the general wording. Here’s my question:

Has the world changed so much since the Statue was dedicated and these words added to her base? The population has increased dramatically, our assorted civilisations have changed, technology and culture have changed. The US is no longer (so much) a growing nation keen to find the good in change. Indeed, like Greece and Rome of old, many argue that the US is a nation in decline. I wouldn’t go that far, myself.

I was reminded sharply of the wording and intent of the infamous Second Amendment, and how it was written in the spirit of a world that no longer exists.

If that’s true, then perhaps it’s also true of the text on the Statue of Liberty? Does she now express a sentiment and a mission that is no longer something we’re capable of properly honouring? It needs to be tempered with an eye to practicality and safety?

Of course, I imagine liberals / left-wingers / fuzzy-wuzzies will rail against this idea. I get it. The very thought is inexpressibly sad to me. How could it not be? It’s an acknowledgement that the world has become a darker, more hostile, less glorious place. But just because it’s sad, doesn’t mean it’s not true (doesn’t mean it is, either – I’m just philosophising here).

The same, obviously, can be said for the way conservatives / right-wingers / rednecks rail against the idea of gun control in the US. On some level, I believe the sentiment – if not the ideology and the actual statistical and empirical data on the relative dangers posed – is comparable.

What do you think?

5 Responses to A thought on immigration and the changing world