I suppose it is expected of me, as a science-fiction author, to delay telling you the story of my broken car and the way it got fixed, so I can rhapsodise about exoplanets.

Okay, it’s really cool. Don’t get me wrong. The latest information I read has seven rocky Earth-like planets, three of which exist in the habitable “Goldilocks Zone” in the system of a dwarf star about the size of Jupiter. Even if the three planets capable of supporting Earth-like life are completely barren, it’s very cool. But if they have life ‑ !

Yeah, it’s very cool, and might change everything in the way we look at the universe and ourselves. Just … be prepared for it to also be depressing as fuck, alright? Because there are still a heap of people out there who actually don’t believe space is even a thing.

This is not going to be as cool to a lot of people as it is to the folks I generally feel I’m talking to when I write these blog posts. It’s not going to stop our bigots, our ignorant, our idiots from tearing this world apart one brick and one life at a time. It’s not going to stop our politicians and the corporations that own them from shitting directly into our environment’s mouth, and the media (owned by those same corporations) from telling us it’s chocolate cake.

Things are not particularly likely to take off in a United Federation of Planets direction anytime soon. 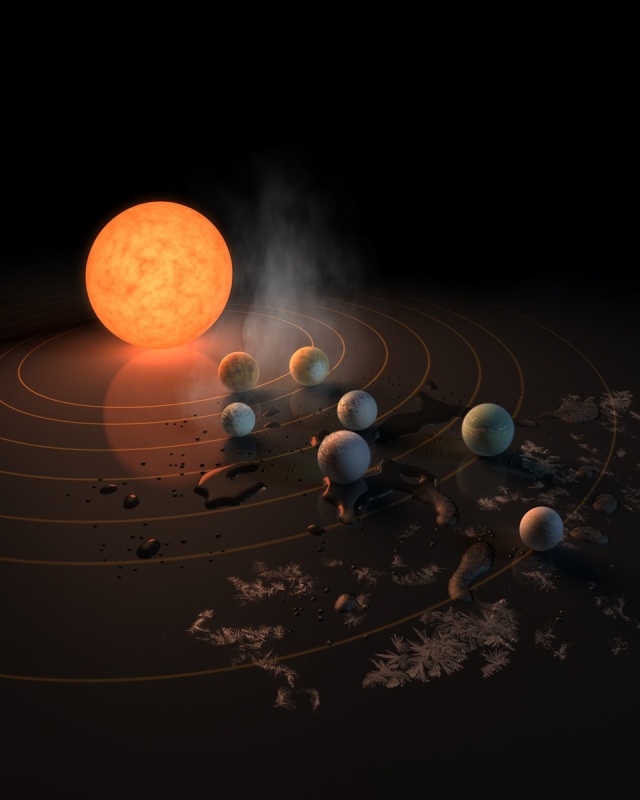 Not pictured: The wild celebrations when that happens. Lucky my mum decided she was going to give birth to me on the hospital roof, or this would have been really boring for them. Am I right?

Maybe the Trappistians have been watching us for longer than that. Maybe they will start sometime in the future. Maybe they’ve been looking for planets to expand onto, having filled their system to capacity, and they’re already on their way here. Or maybe they decided not to bother, after watching us for a bit, because we’re clearly best left where we are.

It’s very neat. It’s even neater than those alien megastructures that might have been in orbit around that star back in the Sixth Century (see my post on the subject, hilariously entitled “Another Tuesday“). It’s comforting , I suppose, for some of us. The thought that we’re not alone in the universe. That life does happen more regularly than it appears, and that something might carry on in the cosmos after we wink out. Trappist-1 is very young, and set to keep on shining for a very long time. So – stray radioactive madness and the nine-day Trappist F year aside – any life out there should be fine. 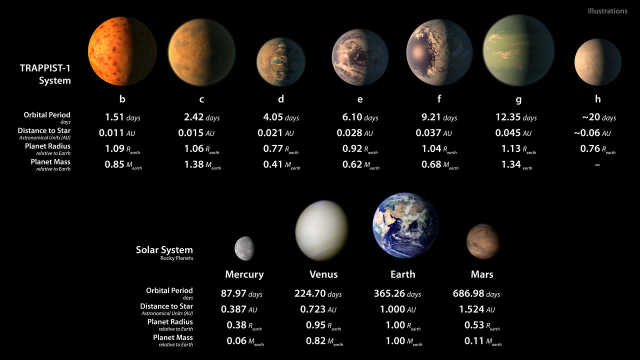 Constantly infuriated by the way they write the wrong year on their letterheads, but you know, otherwise fine.

Beyond the theory, the knowledge, this doesn’t really get us anywhere. This doesn’t mean we have planets to evacuate to when we human-centipede this one to death. Short of developing faster-than-light capacity, workable cryogenics, or some other means of getting off this planet and onto that one … no. We’re stuck here, looking up like a person drowning in a bathtub full of raw sewage watching a fly crawling around on their bathroom ceiling.

In fact, I’m not even sure why I put “like” in that previous sentence.

It makes me sad that the world seems to have killed the childlike wonder and optimism I would normally have felt about this discovery. I just don’t think we’re a good species. I’m not sure I ever directly thought that we were, but now I’m pretty certain we’re not, and we should probably just leave the rest of the universe alone.

But this is, all in all, an uplifting discovery. The world certainly hasn’t killed my idealism to the point where I want us to stop looking for this stuff – on the contrary, looking up is one of the things I believe separates the worthwhile humans from the rest – but I’ve reached the point where I sort of accept that it’s not going to make any practical change in my life. I still want to know, but some profound shift has occurred and I’m resigned to the fact that knowing is the end-game, for me. There will be no step forward into doing.

I want there to be some massive practical change in humanity as we know it. Oh boy, do I. And I certainly want this to mean something real for my kids … so I’ll try to keep my misanthropic muttering to a minimum.

I just hope that, if the Trappistians are watching us, then in thirty-nine years (or one thousand, five hundred and eighty-two of their Trappist-F years[1]) they pick up this blog post somehow from the electronic ether and know that at least one of us meant well.

[1] That’s how we aliens are supposed to say it, right?

Perhaps the wandering survivors of their civilisation will pick it up nineteen years after we achieve superluminal flight in 2037, and send a colonising force of USian climate deniers and anti-vax twatwaffles to check the place out. If that happens … I’m sorry, Trappistians. We really only did it to get them off our planet. It was selfish and cruel. Welcome to the universe.

Better luck next time. Plenty more exoplanets out there, apparently.

I’m not often driven to introspection or reflection, but the question does come up sometimes. The big question. So big, there’s just no containing it within the puny boundaries of a single set of punctuationary bookends. Who are these mysterious and unsung heroes of obscurity and shadow? What is their origin story? Do they have a prequel trilogy? What are their secret identities? What are their public identities, for that matter? What are their powers? Their abilities? Their haunted pasts and troubled futures? Their modus operandi? Where do they live anyway, and when? What do they do for a living? Do they really have these fantastical adventures, or is it a dazzlingly intellectual and overwrought metaphor? Or is it perhaps a smug and post-modern sort of metaphor? Is it a plain stupid metaphor, hedged around with thick wads of plausible deniability, a soap bubble of illusory plot dependent upon readers who don’t dare question it for fear of looking foolish? A flight of fancy, having dozed off in front of the television during an episode of something suitably spaceship-oriented? Do they have a quest, a handler, a mission statement, a department-level development objective in five stages? I am Hatboy. https://hatboy.blog/2013/12/17/metalude-who-are-creepy-and-hatboy/
View all posts by Hatboy →
This entry was posted in Hatboy's Nuggets of Crispy-Fried Wisdom, Uncategorized and tagged aliens, discoveries, exoplanets, NASA, space. Bookmark the permalink.