Bear with me, WordPress seems to have tweaked their image inserting feature, so let’s see how this ends up looking.

This dilemma has rather seized my attention over the past few days, mainly because of my old pal He Who Is Shannon (long story) sprinkling it all over Facebook like that guy in that new meme who sprinkles things in a funny way.

You know. This guy who sprinkles in a funny way.

Anyway, the main story is that there’s this guy, Richard Spencer (not pictured here on the left), and he was giving an interview when a hooded man ran up, punched him square in the face, and ran off.

The catch, of course, is that Spencer is the father of the alt right movement. Basically, and quite literally, a Nazi. And now the question that arises is, is it okay to punch him in the face?

Freedom of speech – hate speech and incitement notwithstanding – tells us he is allowed to say what he wants, without fear of reprisals. And yes, he denies being a neo-Nazi or a white supremacist (despite the spiel about white culture, a white homeland, and the whole “hail Trump, hail victory” thing that you ought to be able to see in the link above if you give it a bit of a read). He says he’s non-violent, calling for debate and discourse, and he wants his policies to be enacted with peace and compassion.

There’s only one problem with that, of course. 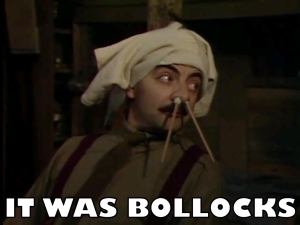 A timely reminder of World War, in this case the First but my point remains.

A white homeland can’t happen without lives being destroyed, people being killed, and a massive amount of conflict and bloodshed. There’s just no way. Additionally, as per my spiel further on down here, the whole concept of segregated homelands isn’t just a giant phlegmy loogie in the face of my entire unified-humanity worldview, it just seems to be a practical impossibility.

Credit: He Who Is Shannon

So should he be allowed to talk about it? Should he be given a platform and have his ideas destroyed by reason and intellect, empathy and enlightenment, as the atheists’ beloved Four Horsemen seem to think should happen?

Because I think if that worked for Nazis, the Allies would have tried it and declared it a success instead of doing that whole pesky World War they did instead.

The problem is, the Nazi mind-set is all too alluring to the human tribal instinct. It can’t be argued away with reason, because there’s that horrible little monkey-voice in the back of our heads saying good point, those other people are to blame, wouldn’t it be great if we just got rid of them – peacefully, of course?

That horrible monkey isn’t going away. Not at this stage in our evolution. It’s not going to stop because people talk about it. This is why we get history repeating itself over and over again within living memory.

This is a problem for me, of course, because I would (self-evidently) far rather talk than fight. If I tried to punch a Nazi in the face, I’d probably just hurt myself. However, and with full and cheerful acknowledgement of a hypocritical ideology similar to “I don’t think I have it in me to kill an animals with my bare hands, yet I will happily buy and eat meat from a shop”, I have to say that on balance, yeah. I don’t give a single fuck. If this guy and all his ilk are punched really hard in the face, three times a day until they either die from an inability to breathe or eat, or just give up on ever trying to express their poisonous views in this life, that’s absolutely fine with me.

And therein lies the only dilemma, for me.

The whole freedom of speech argument, as noble as  Evelyn Beatrice Hall’s I disapprove of what you say, but I will defend to the death your right to say it statement might be, can just fuck off.

Yes, I would actually prefer it if we could discuss these things with the Nazis and get them to see reason and go back to a sane and productive existence. But if they could do that, they wouldn’t be Nazis, would they?

There was a huge debate about this on Facebook, with 12 of the 13 involved parties saying “yep, punching Nazis is fine” and the 13th actually being a Nazi. I didn’t think there was much point in discussing the points the Nazi was raising (peaceful resettlement, discussion vs. violence, lack of justification for the Nazi label, et cetera), but I had a go anyway because that’s just me, I guess.

So. One guess as to whether that got any response or discussion from the Nazi side of the debate.

So I default to just being pleased to watch this white supremacist piece of subhuman garbage getting punched in the face.

And when I say “subhuman”, please keep in mind my comprehensively published opinion of humans.

Discuss? Contrary to appearances, I am actually perfectly happy to hear dissenting views on this. I think you can disagree with the idea of a bad person being punched in the face without being a bad person yourself. It’s just … you know, I don’t think you’re arguing for a particularly rational position, for all that it’s laudable.

I’m not often driven to introspection or reflection, but the question does come up sometimes. The big question. So big, there’s just no containing it within the puny boundaries of a single set of punctuationary bookends. Who are these mysterious and unsung heroes of obscurity and shadow? What is their origin story? Do they have a prequel trilogy? What are their secret identities? What are their public identities, for that matter? What are their powers? Their abilities? Their haunted pasts and troubled futures? Their modus operandi? Where do they live anyway, and when? What do they do for a living? Do they really have these fantastical adventures, or is it a dazzlingly intellectual and overwrought metaphor? Or is it perhaps a smug and post-modern sort of metaphor? Is it a plain stupid metaphor, hedged around with thick wads of plausible deniability, a soap bubble of illusory plot dependent upon readers who don’t dare question it for fear of looking foolish? A flight of fancy, having dozed off in front of the television during an episode of something suitably spaceship-oriented? Do they have a quest, a handler, a mission statement, a department-level development objective in five stages? I am Hatboy. https://hatboy.blog/2013/12/17/metalude-who-are-creepy-and-hatboy/
View all posts by Hatboy →
This entry was posted in Hatboy's Nuggets of Crispy-Fried Wisdom, Uncategorized and tagged moral dilemmas, nazis, resistance, standing up, violence vs nonviolence. Bookmark the permalink.