Interlude: Fantastic Age-Limits and Where To Stick Them

I was a bit stressed out earlier this week. I was worried, with reasonable justification, that I would not get to go and see Fantastic Beasts and Where to Find Them with my firstborn, who is a huge Harry Potter fan but who, cards on the table, has not yet reached the age limit (twelve years) to see this film unattended, and has in fact not reached the age limit (nine years) to see this film in the company of a parent. But I was determined to see it with her, and raise Hell if we were banned at the doors. I mean, furiously determined.

This deep-seated anger probably relates back to a trauma in my own youth, where I was denied entry to see A Clockwork Orange. On the day before my 18th birthday. On the last night of a special-event re-screening of the movie. Where if the movie had been five minutes longer, I would have turned eighteen in the theatre. Yeah, that left a bad taste in my mouth and I was convinced Finland would be even more rigid than Australia.

I mean, I can sort of see it in the case of restricted-for-adults-only movies with the sort of stuff A Clockwork Orange had in it. I can see that some sort of control should be imposed over potentially life-altering psychological input (not that A Clockwork Orange was necessarily that) just as it is over life-altering chemical input like cigarettes and alcohol. And I can see how that’s an impossible line to really draw and satisfy everyone. But I now live in a country where adherence to the rules has been elevated beyond a cultural trait and has become a defining pathology. So naturally, I was concerned that it would wreck my daughter’s week. Yet again.

Still, I won’t go off on a rant about Finnish regulation-fetishism now. Nor will I go off on a rant about parental advisory notices, and how they should be considered (in my opinion) a cover-your-arse measure for movie theatres in case parents complain that their kids got traumatised. “Hey, we said it was suitable for twelve-year-olds, if you take your kid anyway, that’s your bad.” It is parents who should enforce this rule, on their own recognisance and based on knowledge of how well their kid can handle it. I can see how some sort of general guide to what to expect in a movie is useful, so parents don’t have to pre-watch everything their kids are about to see just to make sure it’s okay. But whoever decided the Harry Potter franchise was for near-teens, while Ice Age and Coraline were somehow on the same level as one another (and both suitable for five-year-olds), needs a swift smack upside the head. And it absolutely should not be up to movie theatre employees to enforce the rule. That shit is beyond their pay grade, and I say that with love.

Guess I did go off on a rant there.

I only mention it because a) I was a bit stressed about it and unable to focus on things lately, and wanted to explain why; b) it all turned out for the best (obviously) and we got to see the movie; and c) it segues nicely into my little review of a movie that seemed to be all about idiots adhering to dumb rules for no reason.

With that scathing-sounding intro, I suppose I should quickly add that I really enjoyed the movie. It was a lot of fun and I loved seeing it with Wump. That was, to be honest, 75% of my enjoyment. She was so excited, so keen on it, so…

Well, alright, about twenty minutes in she asked me when Harry Potter was turning up, so then I had to explain that the movie was set long before he was born, in the days of Dumbledore and Grindelwald’s falling out and Newt Scamander’s creation of his titular book. Also that you can’t really commentate movies in a theatre the way you do at home. But anyway, after that she was completely on board and picked up on all the right things.

“They ought to use occlumency if she’s a legilimens.”

“Dumbledore’s always liked students who wanted to learn about magical monsters instead of just kill them.”

“That thing that happens when you can’t hold your magic in anymore, that’s what Dumbledore’s sister had.”

I should probably also add, at this point, that there are likely to be spoilers throughout this post. Not only for the movie, but also the books if you haven’t read them. But I’m really only going to worry about the movie spoilers.

Anyway, as I mentioned, the movie takes place somewhere around Prohibition-era New York, and Newt Scamander has just come for a visit to pick up some magical creature or other to add to his study-and-breed-and-release program.

Newt Scamander, incidentally, is Contro. Not the Contro of The Final Fall of Man, but my friend on whom the character is damn-near-1:1-based. He is exactly like how Contro actually acts and sounds. Which sort of made me adore him right from the start. And also feel extremely sympathetic to both sides when he confessed, “People don’t like me, I annoy them.” 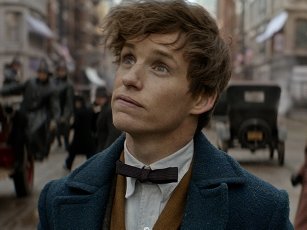 There’s a lot of very interesting differences between the way USian wizarding folk and British wizarding folk operate. The USian system is far more segregated, with no muggle/no-mag interaction with wizards and witches, no interbreeding, and so on. There are a lot of silly rules, as I said in my introduction and which Scamander also points out, but they handle them in an interesting way.

The movie suffers a bit from the classic Potterverse issue of tooth-grindingly frustrating and obtuse people in leadership positions not letting characters finish saying a sentence that would clear everything up, and only giving them the time of day when it’s almost too late, and then not admitting that they made cunts of themselves. But I think that’s a reflection of the real world, and we should probably cop to it.

“Boy, did I ever make a cunt of myself.”

That said, the movie was a delightful adventure, with lots of laughs, some wonderfully tear-jerking moments, plenty of nods to the keen fans (Wump gasped and turned towards me with excited OMG-face several times through the movie as various facts – Dumbledore! LeStrange! Grindelwald! Erumpent! – were revealed), and a real sense that we’ve stepped past the struggle between Voldemort and that pesky school kid, and are now wading deeper into the actual wizarding world.

And I for one am very excited to see how Johnny Depp performs as Grindelwald. I just hope he can keep himself on the rails and not have any more meltdowns for a few years. Since I assume, at this point, the up-coming movies are going to delve more into the question of muggle segregation and wizarding supremacy, the fight between Gindelwald and Dumbledore – that we have only seen the edges of in this movie – will become a central plot arc.

Indeed, the very interesting angle this movie (and Rowling’s world in general) took here, with the vastly powerful and naturally-suited-to-rule minority hiding itself away as though it was inferior … well, it’s very like the central struggle of the X-Men universe, of course. And the same arguments can be made – the good guys say they should stay separate (within reason) for the good of the muggles, and the bad guys say they should rule the muggles for their own good. And this is where Fascism comes from, and why Grindelwald found his support base, and at this stage it’s not even a fucking allegory anymore, it’s just photoshopping wands into politicians’ hands.

Rowling has, in my opinion, done a very interesting and clever thing here, by moving from the successful book series into a spin-off movie franchise without (as far as I’m aware) actually writing more novels. I know there has been a screenplay for the Cursed Child, and some in-universe textbooks and things that this movie is loosely based on, but to move into screenplay-writing and film creation is really impressive. And it was an unqualified success, I have to say. Well played.

I can’t wait to see more of these. I can only assume Wump’s adorabubble witch disguise is going to become more effective as she gets closer to the legal age to see them.

Seriously, the scariest thing in the movie was the anti-smoking ad that came on before it, with the guy horking phlegm out of his throat-hole. But I guess if it stops her from smoking…

Fun and exciting and heart-warming. And oh yes, the creatures were fantastic.

The comments section contains spoilers for the movie, and I’m not going to spoilertext them all. You have been warned.

This entry was posted in Hatboy's Movie Extravaganza and tagged fantastic beasts and where to find them, films, Harry Potter, movie reviews, movies. Bookmark the permalink.

8 Responses to Interlude: Fantastic Age-Limits and Where To Stick Them