So, I’m going to talk briefly about Suicide Squad, but I don’t want to put in too many spoilers because I haven’t got time to faff around with spoilertext today.

I’ll just say, right from the outset, that it was a pretty damn good, and pretty damn entertaining movie. I know viewers have high standards for their comic book movies these days, and while expectations for DC movies have taken a beating lately, I think some of the expectations viewers and critics have had for this movie were unrealistic, and their criticisms unfair.

This was a good movie. Fun to watch, and I cared about the outcome – at least insofar as I ever care when there’s a swirling lightning-vortex of sky-shootery in the middle of a city and a bunch of superheroes have to shut it down and kill the arms-spread laughing supervillain in the middle of it. Which is to say, I care every time, but it’s also silly every time.

For my part, I enjoyed the movie, and it probably goes without saying even this early in the movie’s public life, but Harley Quinn made the goddamn movie. She was absolutely perfect, stealing the show in a way that (I’m just going to say it) the Joker stole the show back when he was played by Jack Nicholson. Or, indeed, when he was played by just about anyone.

Pictured: The bad guy who beats Batman every time, except where it matters.

The main reason, I think, that Jared Leto’s new Joker didn’t get the love he deserved was because … well okay, because he was going on stage after Heath Ledger’s final bow, which is a pretty fucking challenging way to take on a role. But also because he was playing “Mister J” to Margot Robbie’s Harley Quinn, and she stole the spotlight from him devastatingly. She was not the moon orbiting Joker’s world. She was the sun, and all the rest of the Suicide Squad were orbiting around her and shading their eyes from the glare.

Having said that, Joker was cool. Creepy, a little bit scary, and the rest of the characters played it well enough to add to his menace even though he got very little screen time. I think the movie could very easily have been a straight-up Joker and Harley flick, but that wasn’t what DC wanted to do here, and fair enough.

The rest of the cast put in good performances. Amanda Waller was chilling and perfectly performed as the head of the third side of the evil triangle taking part in this movie. There were literally no good guys at all, except by reflection[1]. Will Smith did a great job playing Will Smith[2]. All the rest of the Squad nailed their roles pretty well, and it wasn’t their fault that they were a bit one-dimensional.

[1] And Katana. Katana was pretty much a good person, although she killed more readily than your classic superhero might and her sword eats people’s souls. But she was pretty unambiguously a Good Guy. Which might be why she felt a little bit shoehorned into this movie?

[2] I don’t say that to criticise his acting ability, he’s good at what he does. But … you know, what he mostly does is Will Smith, and that’s enough. 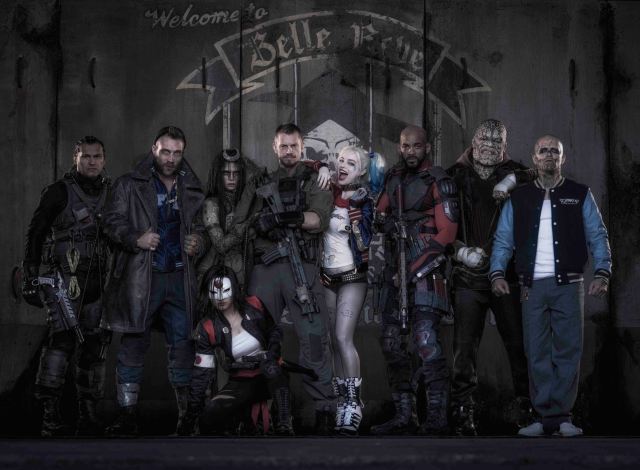 Honestly not sure why some of these characters were even here.

Were there a few too many random who-the-fuck-is-this-now characters? Sure. They did a good job getting rid of some of these in clever, amusing, plot-and-character-forwarding ways, but others still could have been removed in favour of a more fleshed-out Joker and Deadshot. But like I say, DC wanted an ensemble movie, so they made their choice.

But about those unfair critics. Let’s just take a look at some of the criticisms then. But first, a word about DC fans.

I saw a couple of stories about DC fans petitioning to shut down Rotten Tomatoes (good idea! Shut down Google next because I can still find criticisms there) because of the unfair reviews and scores. Don’t be fucking idiots. Cry all you want about how unfairly treated your movies are. Go tell it to John Carter. On Mars.

The prevailing criticism of the movie[3] seems to be that it suffered some development issues. DC wanted to play to its grimdark strengths, particularly the Batman movies (duh), but also to fix the issues people had with Batman vs Superman. And also make it funny and crazy, like Deadpool. And toss in a bunch of quips and songs from the 70s, 80s and 90s, to appeal to the thirtysomething demographic who so loved Guardians of the Galaxy.

[3] For the critics who put in any effort whatsoever, that is, rather than just listing characters, actors, and scenes in the movie and tacking on “is bad” at the end.

And yeah, okay, there was a bit of that problem in plain sight in the movie. It was crowded. I am perfectly happy with a movie that has a mixture of tones. I think something can be dark and funny at the same time without having to be “black comedy”. Heck, I like to think my own book series fits this bill, being amusing in places while still occurring against a backdrop of the entire galaxy being wiped out. It doesn’t need to be “edgy”, and it doesn’t need to stick to a genre. And by all means, jam pop songs in there to make it fun and tell a bit of the story. They actually succeeded there.

There were also criticisms of the characters, although I’m pleased to see the universe isn’t entirely insane, and Harley Quinn has been almost universally praised (and Joker gets his props too). And I tend to agree – as I said, I would have been happy to see the lines and performances of two or three of those extras get folded into the big characters, and we could have proceeded nicely with a more manageable group. I feel like a traitor, but the Australian guy (Captain Boomerang), while funny, could have been dropped. He was weird in the Arrow TV series[4], and he was weird here. Give his lines to Deadshot and his moves to Katana, and call it good.

[4] Don’t even get me started on the DC TV shows. Arrow and The Flash seem to be completely written out of the continuity and they’re starting all over again from some arbitrary point somewhere around the first new Superman movie? At least Marvel are keeping all their movies and series more or less coherent and canonical. Okay, the less said about Spider-Man, the Fantastic Four, and the reconciliation of the X-Men and the Avengers the better … but they’re mostly keeping their shit together.

What else? Meh, nothing much. Most of the criticisms seemed completely unfounded and based more in “everyone’s ready to hate this movie or scream about how unfair all criticisms are, so let’s start that fire” than in actual critical analysis of the movie.

The Washington Post laughed at the name “June Moone”. Yeah well, comic book character names are dumb. Strap in and enjoy it.

One critic wondered why Robbie was putting on such a dumb accent to play Harley. Oh, what, you mean Harley Quinn’s accent? Fuck off and learn your material before putting your fingers to the keyboard.

And most of the rest was pre-empted by “if you’re a fanboy, you’ll love this movie”. Well, I don’t think I’m much of a DC fanboy, since Superman is pretty dull and I haven’t cared about Batman movies since Tim Burton stopped making them … but I still liked this.

Guess that means I’m a fanboy.