Well, another Ropecon is over for another year. We didn’t do Friday, but this year was the first year we did Saturday and Sunday, and hung around for more than a couple of hours. Which was great, although I consider Ropecon worth the price of admission in most cases anyway. Actually going to some of the lectures and taking part in some of the activities made it that much more worthwhile, although just walking around and making friends with the wonderful convention folk is also good.

Next year, we’ll have Ropecon and Worldcon to enjoy, which will be grand. And Wump and Toop will be that little bit older, and able to take part in more stuff. Not that Wump didn’t take part in things – she created some custom toys with Mari Kasurinen‘s workshop, and painted her first tabletop miniature, and whupped Mrs. Hatboy in the boffer arena.

Most of my photos are from Saturday, when I attended as Edpool and had Toop with me as an adorable ice-breaker.

“It’s for my eldest daughter, she’s a big fan of Frozen. Oh okay, Slave Leia can also be in the picture. Wouldn’t be a convention without a Slave Leia.”

Toop was an excellent caption-bearer, running away nowhere near as many times as Wump did when she filled this role 3 years ago.

Although she did vanish once or twice.

She also made friends with anyone in possession of a box of candy or the ability to make soap bubbles. As far as survival skills go this is probably one I should be concerned about, as a father, but convention folk are good people. 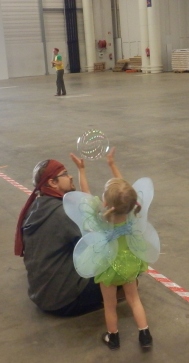 These shots are from Sunday, when she appeared as Tinkerbell.

And Wump made an amazingly cute and ferocious Serena, the Pirate Fairy. It’s from a movie, I don’t know[1]. Incidentally, these two dresses are responsible for approximately 25% of the glitter found around our house, since they went and jumped on our bed. That may not seem like a lot, but the other 75% is from an actual packet of glitter that Wump upended on her drawing desk a few months ago.

[1] I will, incidentally, be playing fast and loose with a lot of the references in this edition of the Ropecon Report, because I haven’t the faintest idea who a lot of these people were meant to be. No doubt the correct answers will be provided in the comments. 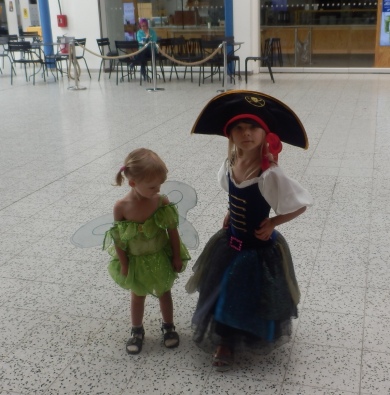 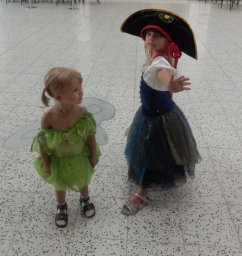 But let’s get on to the real heroes here. The nerds.

First shot of the day, appropriately enough, was with Deadpool’s girlfriend. No, don’t listen to that Thanos punk, Deadpool’s got dibs.

“Thank God, up until now everyone has been all like ‘ooh, female Skeletor!'” – actual thing that Death said while we were posing. Never let it be said there aren’t a lot of clueless people out there.

And then we met Twoflower, who was just flawless.

Even Toop liked this guy.

And then this guy. 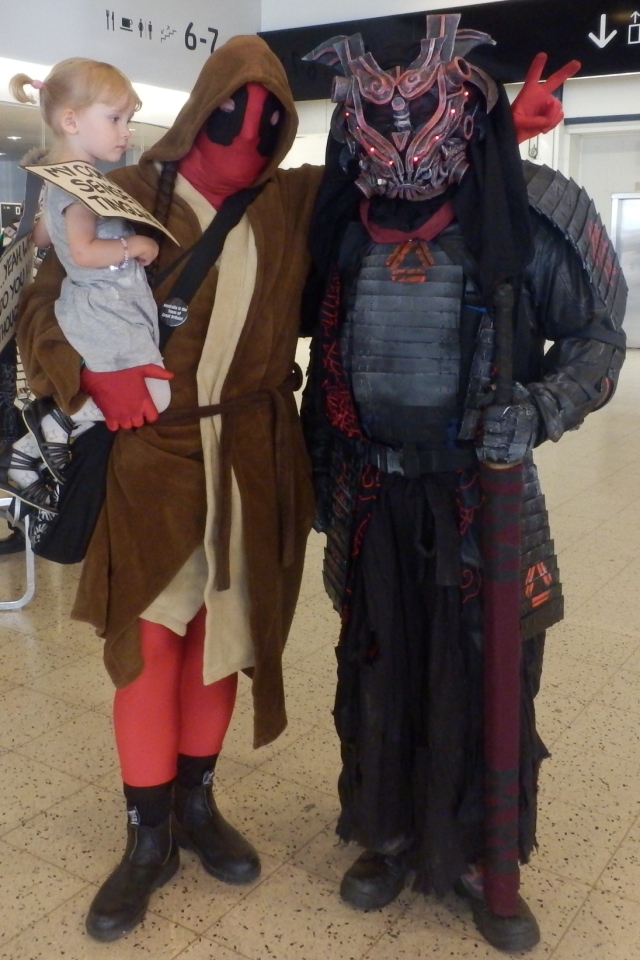 Bless you, This Guy.

The Ropecon lunch room (this year we were at Messukeskus instead of Dipoli, so there was a wider range of options and it was all very nice) was a great place to snap, for example, Raistlin loading up on cannelloni.

They were charging €12 for a buffet lunch, which might have seemed a bit steep until you saw a half-dozen huge bearded LARPers loading up their plates with 4kg of lightly-smoked salmon and then covering it in cannelloni and then going back for a second, third, and fourth plate. Some of these guys didn’t sleep between Friday morning and Monday afternoon, and that’s a lot of calories.

So after a break for lunch, we continued.

The Mad Hatter, and his militant deck-based roleplayer friends, were great sports about the whole thing. 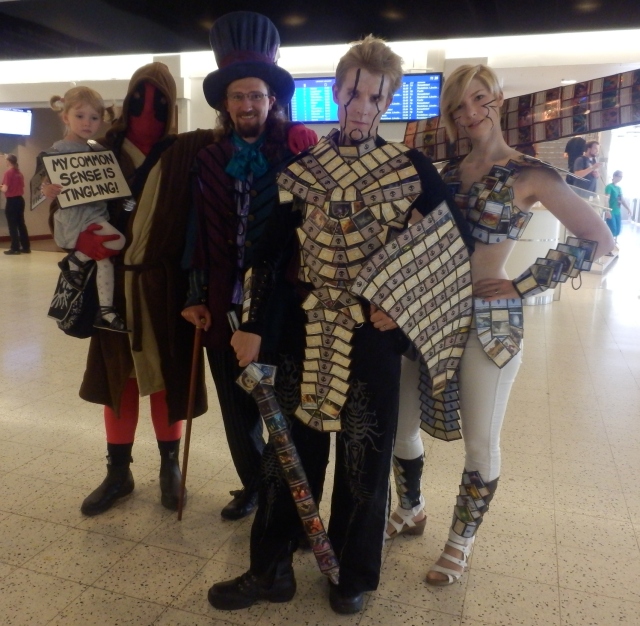 Yes, that armour and sword is constructed out of Magic The Gathering cards.

Toop was very impressed with this lady. 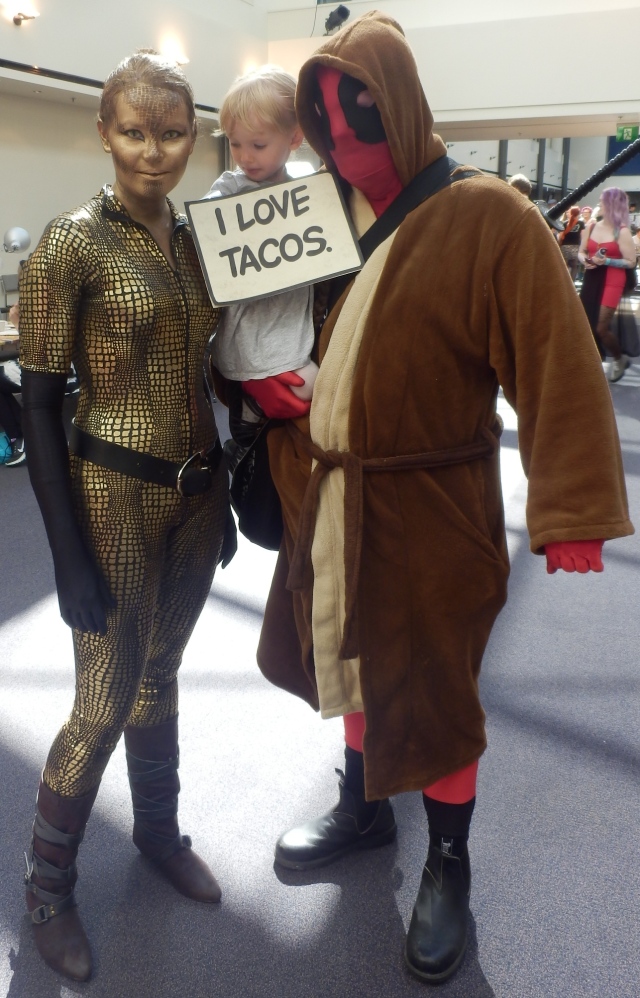 After I’d thanked her for the photo, Toop said “Sssssss” at her. I had no idea she was a parselmouth.

There were some utterly bizarre offerings. 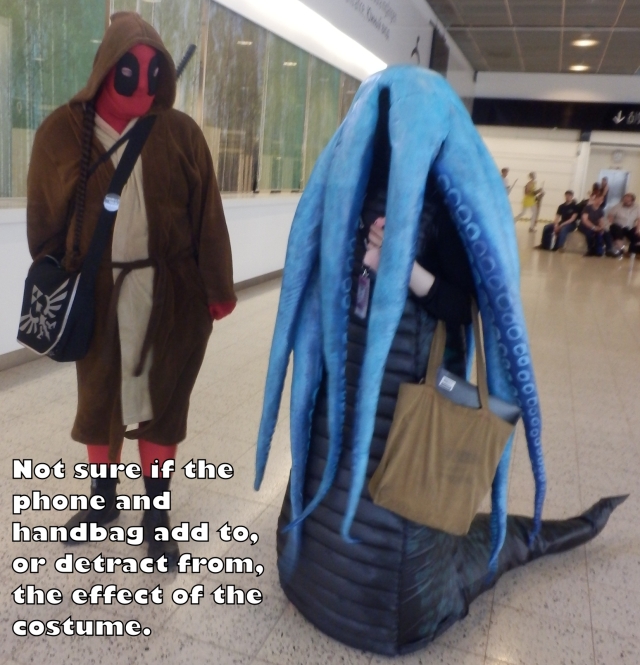 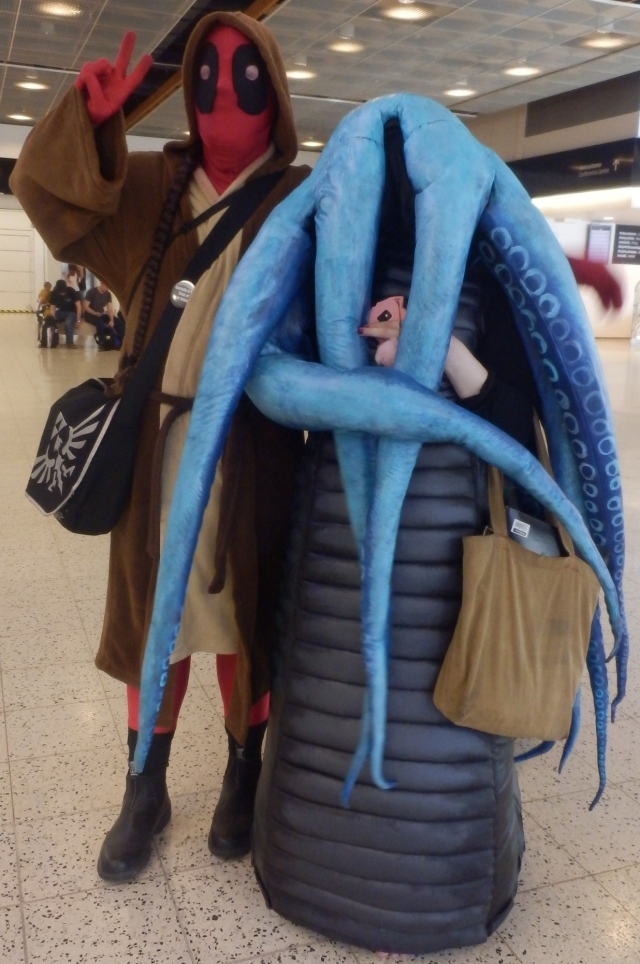 But they were all very nice.

This guy asked me if he was going to give Toop nightmares.

I told him “no, she doesn’t know what a Teletubby is. And now she never will. Ever.”

And I’m not sure who these guys were, so I made up my own little story.

But my favourite people were the Star Wars fans. 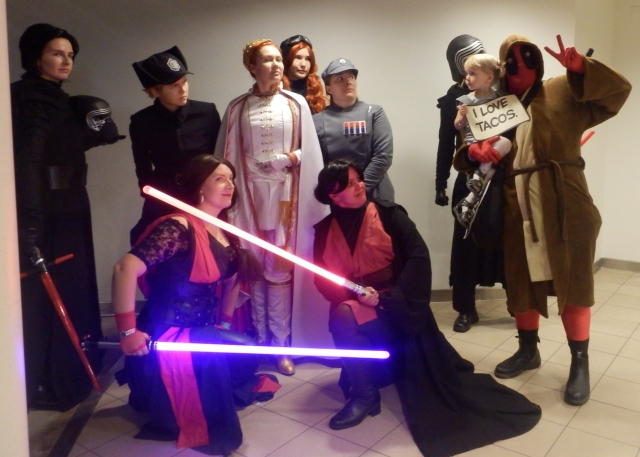 “Let me photobomb you guys – look, I’m in a Jedi robe, I’m totally part of the gang! Now let’s go get those Klingons.”

On Sunday, I left the spandex at home and Steampunked up for the day. This meant my ability to just charge up to people, hug them and get photos taken was severely hampered, but it allowed Toop to be just as cute as a button in her Tinkerbell costume.

Although she was defintiely cuter as Tinkerbell, I think she got more awws on Saturday as the Edpool caption bearer.

Another Ropecon well-spent. Until next year!

I’m not often driven to introspection or reflection, but the question does come up sometimes. The big question. So big, there’s just no containing it within the puny boundaries of a single set of punctuationary bookends. Who are these mysterious and unsung heroes of obscurity and shadow? What is their origin story? Do they have a prequel trilogy? What are their secret identities? What are their public identities, for that matter? What are their powers? Their abilities? Their haunted pasts and troubled futures? Their modus operandi? Where do they live anyway, and when? What do they do for a living? Do they really have these fantastical adventures, or is it a dazzlingly intellectual and overwrought metaphor? Or is it perhaps a smug and post-modern sort of metaphor? Is it a plain stupid metaphor, hedged around with thick wads of plausible deniability, a soap bubble of illusory plot dependent upon readers who don’t dare question it for fear of looking foolish? A flight of fancy, having dozed off in front of the television during an episode of something suitably spaceship-oriented? Do they have a quest, a handler, a mission statement, a department-level development objective in five stages? I am Hatboy. https://hatboy.blog/2013/12/17/metalude-who-are-creepy-and-hatboy/
View all posts by Hatboy →
This entry was posted in Edpool, The Chucky Report and tagged conventions, cosplay, ropecon, wonderful nerds, Wump and Toop. Bookmark the permalink.

26 Responses to Ropecon, final (with pictures)