What can I say about an author who is one of my greatest inspirations, a figure in literature I have always looked up to and aspired to emulate, in philosophy and insight if not in style? Let’s not mince words – my hero, in every meaningful sense of the word?

Nothing, really. Nothing I haven’t just said. And it occurred to me, in the process of looking back through my blog posts and trying to come up with something more meaningful to write, that I have been writing eulogies for Terry Pratchett for a while already. Getting ready.

So, now he’s gone. We’re on our own with the seventy-odd books he wrote, and hopefully a small collection of mostly-finished collaborative efforts still in the pipeline. The rest is up to us. He’s done more than his share.

At this moment, I’m pleased to say at least three Pratchett books are on the go in the Hatboy household, simultaneously. I’m reading the fourth Science of Discworld book, which is sadly a bit of a disorderly hodgepodge of ideas, but you can’t win them all. I’m reading Truckers, the first book of the Bromeliad, to Wump, and each night I read Where’s My Cow? to Toop at bedtime. Wonderful stuff.

I can’t wait to share the rest of them. 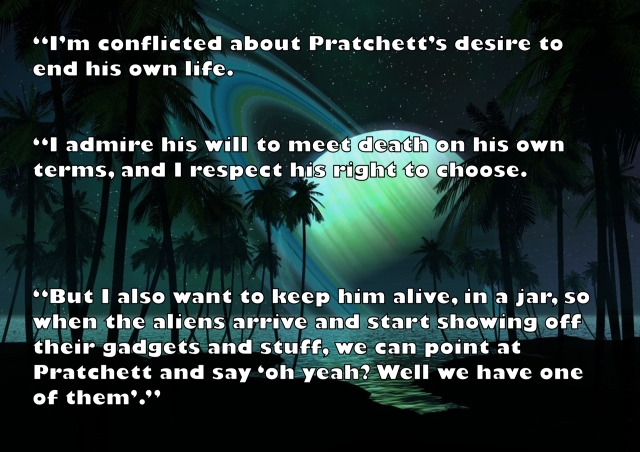 I’m not often driven to introspection or reflection, but the question does come up sometimes. The big question. So big, there’s just no containing it within the puny boundaries of a single set of punctuationary bookends. Who are these mysterious and unsung heroes of obscurity and shadow? What is their origin story? Do they have a prequel trilogy? What are their secret identities? What are their public identities, for that matter? What are their powers? Their abilities? Their haunted pasts and troubled futures? Their modus operandi? Where do they live anyway, and when? What do they do for a living? Do they really have these fantastical adventures, or is it a dazzlingly intellectual and overwrought metaphor? Or is it perhaps a smug and post-modern sort of metaphor? Is it a plain stupid metaphor, hedged around with thick wads of plausible deniability, a soap bubble of illusory plot dependent upon readers who don’t dare question it for fear of looking foolish? A flight of fancy, having dozed off in front of the television during an episode of something suitably spaceship-oriented? Do they have a quest, a handler, a mission statement, a department-level development objective in five stages? I am Hatboy. https://hatboy.blog/2013/12/17/metalude-who-are-creepy-and-hatboy/
View all posts by Hatboy →
This entry was posted in Uncategorized and tagged Discworld, Pterry, Terry Pratchett. Bookmark the permalink.