Well, this weekend was just all manner of fun. If there’s one thing more exciting than a stomach bug while you’re sporting a colostomy bag, it’s that same stomach bug also afflicting your three-year-old daughter.

I think Mrs. Hatboy also had it, but she’s wall-to-wall throwing up and digestion-related side-effects from the pregnancy and medication anyway, so she didn’t even notice it. A stomach bug would have to work pretty hard to get her attention, with Toop doing her magic mojo in there already.

Hard not to notice, though, when your firstborn comes in on Saturday morning and hurls just-eaten blueberry porridge all over the bed in front of you.

I was beginning to feel a bit under it myself by the afternoon, while I was changing the sheets, but I figured it wasn’t going to be bad because I wasn’t having chemo-burps (did I mention my new post-cancer superpower? I can tell within 12 hours that I’m going to get the runs, because my burps change flavour). Turns out I was right, just some mild nausea, mild squirts, light fever and a bit of aching – although that might have just been the shovelling I finally got to do in the yard on Saturday morning. Snow at last! 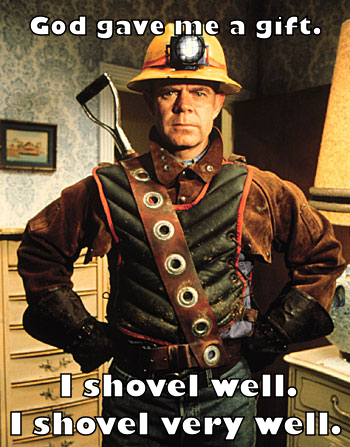 Little Miss Hatboy was doing better too, and came out to play in the snow with me (I don’t kid myself that shovelling is work, at least not when it’s -5°C and the snow’s fluffy). The poor little dear did complain of having a crab in her belly, pinching her, but all in all she had a reasonably chipper day, and after a satisfying visit to the potty she declared the crab had moved on. Apparently to me, but oh well.

We thought she was alright – only to get her asleep in between us at about 11:30pm on Saturday night, at which point she experienced an explosive vertical vomicough, spraying us and our pillows with lunch and dinner and then having a hysteria attack upon waking up with a mouthful of puke.

Got her showered, clothed, calmed down, the sheets changed, and my vomitty hair wet-wiped to a semblance of un-stinkiness by about 12:30, at which point my own stomach was very much in rebellion against the whole fascist “digestion” hegemony as well.

Little Miss Hatboy was well and fine by Sunday (my brother’s birthday, holy shit he’s 46 years old), and aside from a few aches and pains and my usual short temper and a couple of hours on the couch, I was okay too. An uninterrupted night’s sleep last night did wonders, as well as a bit more playing in the snow.

No snow in this shot, it’s from the summer. But the point is, it’s the good times you remember. Really it is.

I’m not often driven to introspection or reflection, but the question does come up sometimes. The big question. So big, there’s just no containing it within the puny boundaries of a single set of punctuationary bookends. Who are these mysterious and unsung heroes of obscurity and shadow? What is their origin story? Do they have a prequel trilogy? What are their secret identities? What are their public identities, for that matter? What are their powers? Their abilities? Their haunted pasts and troubled futures? Their modus operandi? Where do they live anyway, and when? What do they do for a living? Do they really have these fantastical adventures, or is it a dazzlingly intellectual and overwrought metaphor? Or is it perhaps a smug and post-modern sort of metaphor? Is it a plain stupid metaphor, hedged around with thick wads of plausible deniability, a soap bubble of illusory plot dependent upon readers who don’t dare question it for fear of looking foolish? A flight of fancy, having dozed off in front of the television during an episode of something suitably spaceship-oriented? Do they have a quest, a handler, a mission statement, a department-level development objective in five stages? I am Hatboy. https://hatboy.blog/2013/12/17/metalude-who-are-creepy-and-hatboy/
View all posts by Hatboy →
This entry was posted in Uncategorized and tagged kids, poop, stomach bugs, vomit. Bookmark the permalink.

9 Responses to Interlude: Weekend at Chucky’s