The following was taken from an e-mail with my good and esteemed friend Aaron. Apologies bro, but I got carried away with this and thought it would be most efficient to combine my blogging and e-mailing efforts.

Disclaimer: This post is about Stephen King’s books. He’s generally considered low-brow and pulpy (and he often embraces that), so I’m fully expecting a lot of booksnobs to sneer. I’m just going to sit back, imagine Mr. King sitting on a great big pile of money, grinning that adorable bunny-rabbit grin of his, and feel warm and fuzzy as I talk about his books, which I enjoy so screw you very much whose blog is this anyway. 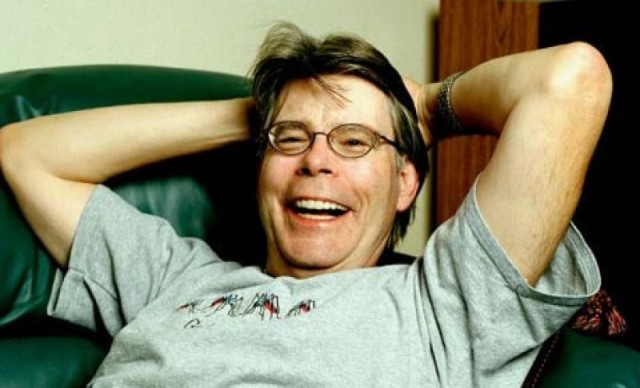 The problem with a lot of books that try to explain time travel in more science-solid terms is that you end up with quantum and other multiverse-based time travel theories, they’re all science and stuff but ultimately disappointing because of the consequences. You can’t “go back in time” and “change the future” – you can only ever “go to some alternative universe where it is earlier” and “create a new probability branch”. The Time Ships, and Timeline, are classic examples of this. Somehow disheartening because plot points weren’t resolved and characters weren’t changed – just whole new ones were created and played out, while the originals languished in some conveniently-forgotten leg of the Trousers of Time[1].

[1] Now, Pratchett’s Johnny and the Bomb, that was pretty much the same sort of thing and yet it managed to be quite satisfying. Not sure how that worked.

Well, anyway. In King’s 11/22/63, the question of time travel was dealt with in an entirely different way. I won’t go into too much detail but the idea was that there was a rift, the protagonist (or indeed anyone) could step through from 2011 and end up in 1958. You could spend as much time back there as you wanted, starting in 1958, then come back through (or not). Two minutes would have passed in 2011, regardless of how much time you’d spent in 1958 onwards, and depending on what changes you’d made 2011 would be altered accordingly. If, however, you went back through the rift, you would go back to the original 1958 instant and everything would reset to the “original”, undoing whatever changes you had previously made.

There was more detail, to do with bringing things back with you, but I think the general idea was that sure, you might be creating new alternative futures, but that 1958 would always connect up to this 2011, so you could move back and forth between them and actually experience consequences of changing history. Going back again would reset, begin a new alternate 2011, and regardless of whether the others you created were still going on out there somewhere, the one you step back into will be the one you just created.

The reset was a really nice idea, it basically commits the time traveller to a single strand but if he or she goes back on it, it returns things to the way they were before he or she interfered.

What really did my head, though, in was trying to link this – in terms of in-King-universe-rules – with The Langoliers (which had a lot of problems of its own but is still a favourite of mine). And I think it can work.

The easiest solution, of course, is “different levels of the Black Tower deal with the transition from past to present to future in different ways”, but that’s lazy! No, the Langoliers devour the universe of the “past”, presumably on an infinite scale with every infinitesimally-small passing instant. Beyond a time-lapse of more than a few hours, you can’t go back into the past because it’s been eaten. I think one of the characters in The Langoliers even says “you can’t go back in time and stop the Kennedy assassination,” or something of the sort. Which was a nice bit of full-circle.

But, the time-hole of 11/22/63 is different. When you go through it, it doesn’t so much take you into the (devoured) past, as makes 1958 the present for the traveller. I think the 1958 the time-hole connects to might be a single bubble of present-time, an infinitely-thin slice of instant that the Langoliers – for whatever reason – didn’t eat. So you can connect to it, and once you’re there the present progresses into the future as before, with the time traveller riding along.

Once there, normal moving-target present-time reasserts itself and the Langoliers go to work once more behind the curtain, skipping the 1958-entrance-moment but otherwise crunching and munching away at history as present becomes past. You make your changes, do whatever, live out your life. Or go back into the time-hole and out into 2011 to find two minutes have passed and the 1958-and-later present you left behind has extrapolated into a new 2011 for you.

But then! Go back through the hole, and it takes you back to that same preserved, un-devoured bubble / slice of 1958 present. Because that never changes. It can’t. And when you go back there and resume the moving-present cycle, of course it resets your 2011, extrapolating from the preserved 1958 moment.

This works better with mescaline.

@StephenKing, sir, I tried to reconcile "The Langoliers" with "11/22/63" and seem to have given myself a Brain Thing. http://t.co/LKkr6SJHBX

I’m not often driven to introspection or reflection, but the question does come up sometimes. The big question. So big, there’s just no containing it within the puny boundaries of a single set of punctuationary bookends. Who are these mysterious and unsung heroes of obscurity and shadow? What is their origin story? Do they have a prequel trilogy? What are their secret identities? What are their public identities, for that matter? What are their powers? Their abilities? Their haunted pasts and troubled futures? Their modus operandi? Where do they live anyway, and when? What do they do for a living? Do they really have these fantastical adventures, or is it a dazzlingly intellectual and overwrought metaphor? Or is it perhaps a smug and post-modern sort of metaphor? Is it a plain stupid metaphor, hedged around with thick wads of plausible deniability, a soap bubble of illusory plot dependent upon readers who don’t dare question it for fear of looking foolish? A flight of fancy, having dozed off in front of the television during an episode of something suitably spaceship-oriented? Do they have a quest, a handler, a mission statement, a department-level development objective in five stages? I am Hatboy. https://hatboy.blog/2013/12/17/metalude-who-are-creepy-and-hatboy/
View all posts by Hatboy →
This entry was posted in Hatboy's Nuggets of Crispy-Fried Wisdom, Kussa mun hopoti?, Uncategorized and tagged Crichton, Langoliers, masses of drugs, Pratchett, stephen king, time travel. Bookmark the permalink.

76 Responses to On Time Travel