After taking this quiz, I discovered that my literary alter ego is just, like, this guy (you know?): 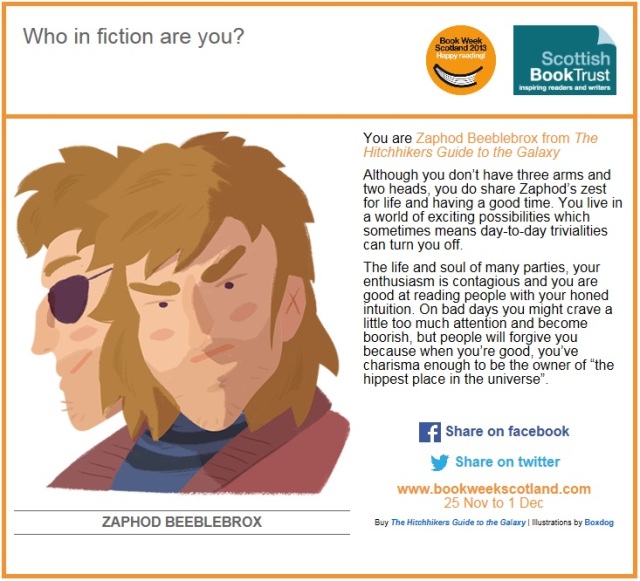 Now these quizzes are silly, we all know this. When you go to the site to see whether you’re going to turn out to be something you can joke or boast about (and let’s face it, they’re not going to put many bad options in there, are they?), you add to their page counter and spread the word to your friends. And that’s cool. Good for them, it’s usually for a worthy cause.

Still, I did it and even though I don’t think I am much like Zaphod at all, I guess that’s where the questions led me. And I guess I can get carried away with myself and be a loudmouthed pain in the arse, especially while drinking. And I think there was a point to this blog entry before I started, but now I can’t remember what it was.

Oh yeah. If I was President of the Galaxy.

Man, it’d be great. Now, don’t get me wrong, it would suck for pretty much everyone else, unless they actually did implement the political system they had in The Hitchhiker’s Guide to the Galaxy (and that we seem to be moving towards) where the President has no real power to do anything except be a celebrity and run around making people laugh. That might work, although – as I said – I think given that sort of brief I would get really annoying, really fast. Like Zaphod, in fact.

This comment led to a fun debate that led inevitably to moral relativism of the “1 person a year killed by sharks vs. 100,000 people a year killed in Syria vs. 1,000,000 people a year killed by driving drunk” kind, which always reminds me of the “Mike Tyson vs. Anti-lock brakes” debates held at Moe’s Tavern on The Simpsons … where was I? Oh yeah, it was a fun debate and I only showed my lead-in, but the moral of the story is I generally don’t care about the bigger picture, fairness or even common sense. If I decide something needs to die, it’s just as well I don’t have the power to actually make that happen because there wouldn’t be a whole heck of a lot left alive after a bad day.

See, I don’t even really want to make publicity for this cretin because now slightly more people are going to go and check his video out. But oh well. No, see, this guy’s a jackass.

First of all, he’s not wearing a helmet, so screw that guy. Instant wrong.

Secondly, we don’t know the full story here. If he was getting fined just for veering momentarily out of the lane to get around something, fair enough, the cop was out of line and there should be some leeway. If that was the case he would have said that was what was happening – he would have said it loudly and repeatedly. But the way he set this up, it’s pretty clear that he was being fined for consistently cycling somewhere he had no business being, where he was going to be an inconvenience (at best) to others. As over-entitled cyclists tend to be.

Thirdly, pavements are often obstructed. So are roads. That doesn’t mean pedestrians get to walk on the highway or motorists get to drive on the fucking sidewalk.

You have a special lane to be a self-righteous tool in, where you can revel in your not-a-motorist, not-a-pedestrian, all-freaking-special-an’-shit status. Count your blessings and shut the Hell up and fuck off while you’re doing it.

So just for a start, if I was President of the Galaxy, the Galaxy – or at least the citizenry thereof – would come to a grinding halt. And that would probably be for the best, because once people got to where they were going they’d start to see all the other crazy shit I’d passed into law.

No, it just wouldn’t work.

And that’s why Douglas Adams was a genius.

This entry was posted in Hatboy's Nuggets of Crispy-Fried Wisdom and tagged cyclists, douglas adams, hitchhiker's guide to the galaxy, kill them all, president, sharks, zaphod beeblebrox. Bookmark the permalink.

8 Responses to Hatboy for President